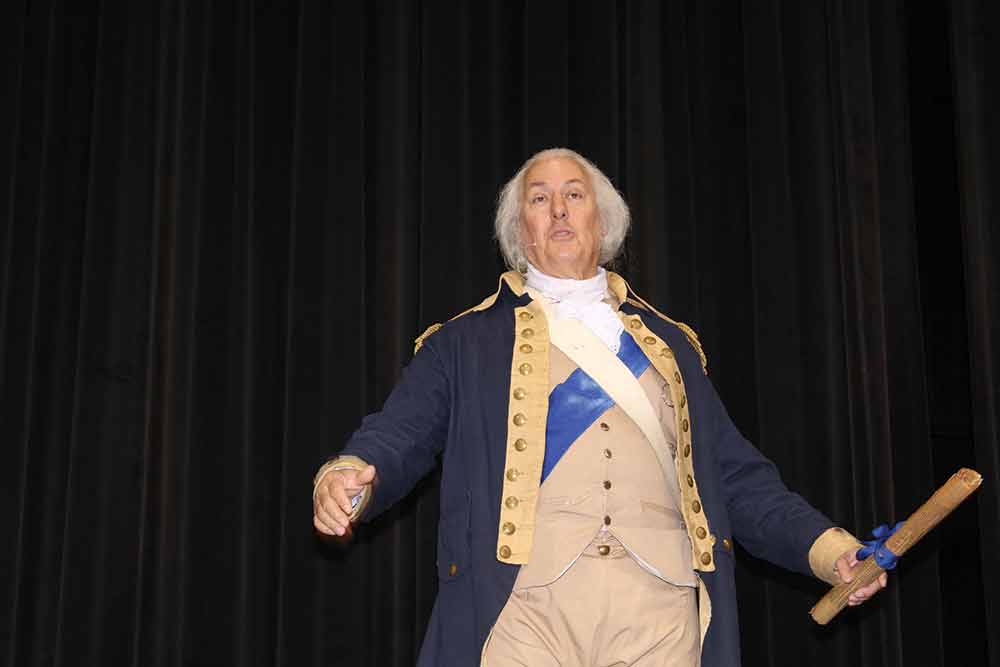 Hargrove encourages attendees to stand up for their rights

Joint-presented by the Constitutional Sheriffs and Peace Officers Association (CSPOA) and HCSO, the event featured and was headed up by Richard Mack, a former county sheriff in Arizona and founder of the CSPOA and was held in the Crockett Civic Center.

Other speakers included Mark Collins, who acted out a role as special guest and the nation’s first president, George Washington; former sheriff Brad Rogers, of Elkhart County, Indiana; and attorney Michael Peroutka, of Maryland, known as a defender of the Constitution.

Conference attendees were welcomed and thanked for being at the event by Houston County Judge Jim Lovell and Hargrove, who also made opening remarks.

Topics the speakers talked about also included what law enforcement officers should and should not do in order to comply with and uphold the Constitution and Mack’s 1997 Supreme Court victory in a lawsuit against former President Bill Clinton’s administration regarding certain provisions of the Brady Handgun Violence Prevention Act “to stop gun control and to stop the overreach of the federal government” that violate the Constitution. 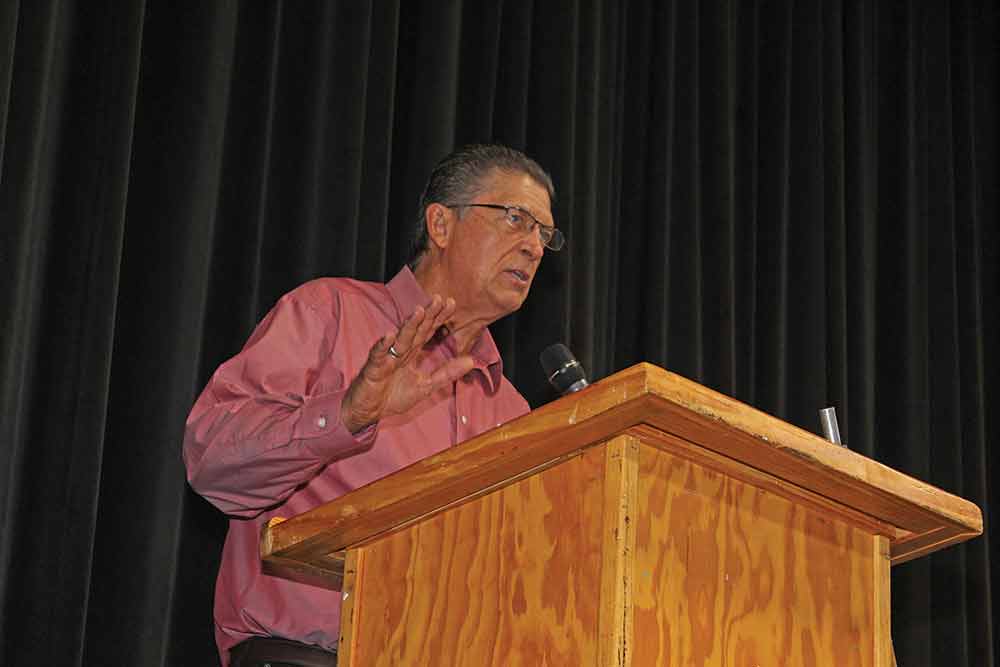 Richard Mack, founder of the Constitutional Sheriffs and Peace Officers Association (CSPOA), spoke to area sheriffs, other law enforcement officers and public citizens, urging them to obey and uphold the US Constitution. (ALTON PORTER | HCC)

In addition, the speakers touched on the Bill of Rights, the 10th Amendment, obeying just (constitutional) laws and refusing to enforce unjust (unconstitutional) ones, and “epiphanies and miracles” that brought them to where they are today.

Concerning CSPOA, which invites all public citizens to become members, Mack said, “This is your organization. This is your time to work with your sheriff and public officials to restore (and live by) the Constitution, the supreme law of the land.”

As sheriff, Mack directed his deputies to follow the Constitution, he said, adding, he told them to guard it and keep their oath. “We all have the same responsibility to protect liberty,” Mack said. “Put liberty first.”

Hargrove called the event a “Constitutional revival” and told the crowd to learn what the Constitution states.

“We can do this peacefully if we will. And that is the goal—to take back our country, like Sheriff Mack said, for all people. Freedom; freedom first—liberty,” said Hargrove

Hargrove added, “I remember going to … school, and it was about liberty and about freedom. I have no idea if they’re teaching that anymore, but I hope they are.”

The purpose of the conferences “is to awaken us and to make us aware of what’s going on. One of the things it did for me not just here, but when I went to the conference in The Woodlands (last February with Chief Deputy Roger Dickey) is it renewed my sense of responsibility (of) the oath that I took to defend and protect the Constitution of the US and of Texas. And so, that’s the most important thing—and to protect the citizens of Houston County and to make sure their rights are not violated.

“When I got out through (the conference in The Woodlands), I felt like I’d been to a constitutional revival. If you’ve been looking at the news, you can tell we’re about to lose our country. If we lose our Constitution, we will lose our country. So, we’ve got to get it right.”

Hargrove said this is the first such conference that he is aware of that has been held in Houston County. The conference presenters “go all over the country,” the Houston County sheriff said. “It’s an effort to educate the citizens. And I hope they take something home from it.”

Hargrove added, the overall purpose of the conference also is to raise their (attendees) awareness of how close we are to losing our rights—to let them know that they can do something. They can contact their representatives and tell them ‘Look, we don’t agree with what’s going on; we want you to vote this way. And then, if they don’t like it, then go to the polls.

“I meant to do a study before today about how many people went to the polls. It’s always amazing how many people don’t go to the polls, but they want to complain about what’s going on. So, I encourage everybody to go to the polls and to let their voices be heard because, as Sheriff Mack and Sheriff Rogers are talking about it, our Constitution guarantees us our right to do that. And if we don’t do it, we’re going to lose it.”

“In my office, every morning, we have a prayer,” Hargrove told the conference attendees. “We pray for our community; we pray for our citizens of our county. And it’s been very exciting for the first of our seven months (in the office of sheriff) now, and the Lord is really working in your office. It’s your sheriff’s office and He’s working in it. And we’re at your service. I want you to know that.”