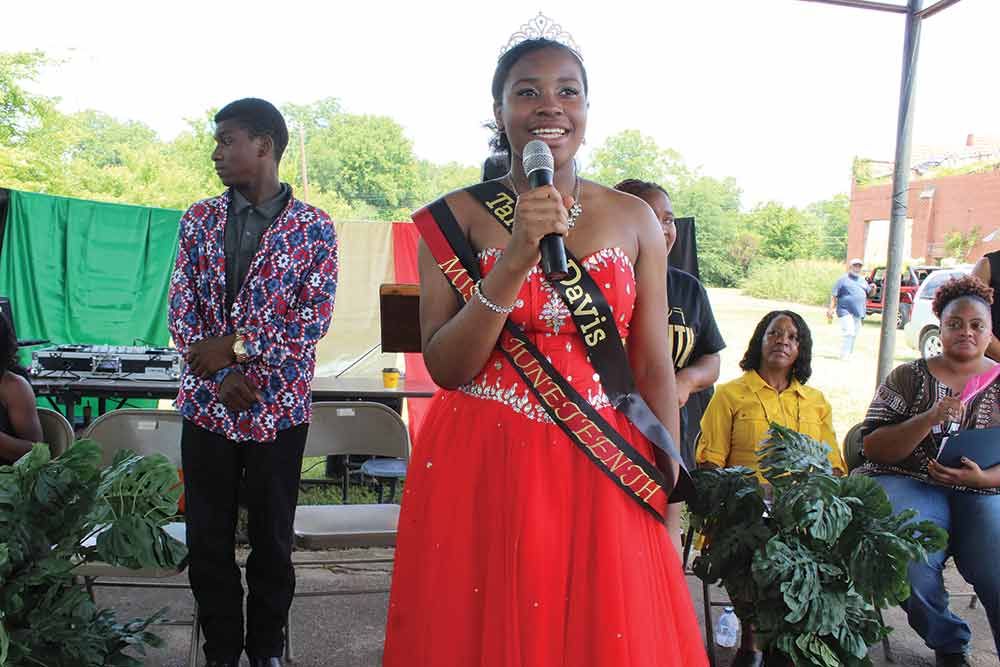 CROCKETT – Crockett’s 35th annual Juneteenth Celebration, themed “Justice for All,” was held, with events being held beginning Thursday, June 10, and rising to a high point with a parade, an official ceremony and a Fun Day Activity taking place Saturday, June 19.

Juneteenth is a celebration commemorating the day in 1865, June 19, when union soldiers arrived in Galveston and spread the word to Texans that President Abraham Lincoln had issued an Emancipation Proclamation calling for the end of the enslavement of Black Americans in the two and a half years earlier on Jan. 1, 1863.

Although June 19 has been recognized and celebrated as a holiday by residents in several states for many years, it was officially made the 11th holiday recognized by the federal government on June 17 upon the signing by President Joseph Biden of a bill passed by the US Senate and House of Representatives last week.

On June 15, the Senate passed a bill recognizing the day, and the House approved the measure the next day. Biden signed the bill into law Thursday, June 17, establishing June 19 as Juneteenth National Independence Day, immediately giving federal employees the day off work on June 18.

“But it can only happen if you’re involved.” Fisher told the attendees. “And so, we’re looking forward.”

Fisher added, “Today, the significance of having it (the celebration) here on these grounds (the Groves Educational Foundation property) is not so much about the age of the building, but this was actually the African American school—the Crockett Colored High, elementary, all the way through.

“So, we chose this not accidentally or coincidentally; it is because it has significance to this community and to us as a people. We want to remember our roots; we never want to forget them.”

Invocations were prayed by Minister Reginald Marshall of Bethel Missionary Baptist Church and Pastor Audice Leon Wallace of Good Shepherd Fellowship Church before the attendees sang in unison the Negro National Anthem, “Lift Every Voice and Sing,” which was led by JoAnn Beasley.

Speaking words in Juneteenth Reflections was event Assistant Coordinator Lynda Warfield, who said the Juneteenth celebration is a serious matter and young people should be taught the history of the occasion and why it is held.

The Emancipation Proclamation “declared ‘that all persons held as slaves’ within the rebellious states ‘are, and henceforth shall be free,’” Warfield said. “Texas did not hear of Lincoln’s proclamation, which he gave on Jan. 1, 1863, until more than two years after it was issued.

“Although Juneteenth has been informally celebrated each year since 1865, it wasn’t until June 3, 1979, that Texas became the first state to proclaim Emancipation Day (Juneteenth) as an official state holiday. This year, 2021, Juneteenth was celebrated federally June 18. We salute President Biden, who officially signed the bill declaring Juneteenth a federal holiday effective immediately.”

Wooten Smith, the first African American to be elected Houston County tax assessor-collector and who was grand marshal of this year’s Juneteenth parade, which was held earlier last Saturday morning, was given the opportunity to speak to the attendees during the ceremony, as was Maxine Session, of Rusk, a founder and owner of Texas Informer News, who was honored as a Woman of Wisdom. Wooten Smith was presented a plaque for her service.

During the celebration, the winner of this year’s Miss Juneteenth Pageant and other girls and boys who participated in the pageant and its induction ceremony held June 10 & 12 were introduced.

Veronica Wheeler, daughter of Lela P. Wheeler, joined by other Wheeler family members, spoke briefly in recognition of her mom, who was a founding member of the Crockett Juneteenth Celebration, along with Fisher and others and Billy “Hollywood” Groves, Groves Educational Foundation vice president offered comments about the event.

In bringing the Juneteenth event to a close, James Gentry, executive director of Crockett Economic & Industrial Development Corporation, led attendees in singing “We Shall Overcome” and prayed the closing prayer.