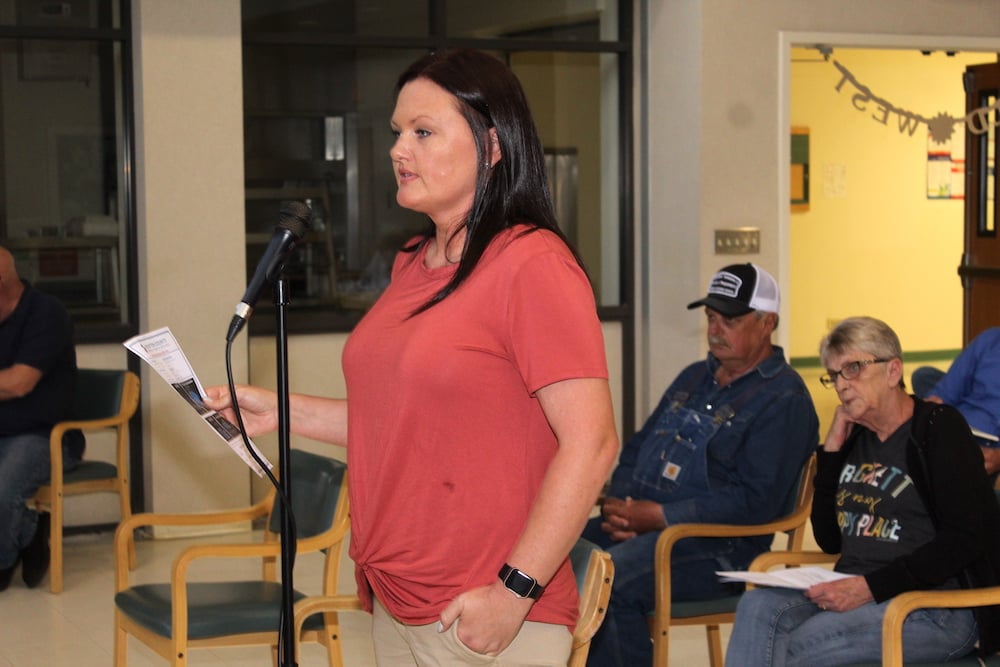 ALTON PORTER | HCC Operations Supervisor Cassandra “Cassie” Gallaway, above, of Houston County Emergency Medical Services, presented a report on the ambulance services providers services to patients in the county last month to Houston County Hospital District board members at a meeting Tuesday, May 18.

CROCKETT – Members of the Houston County Hospital District Board of Directors approved a board’s Negotiations Committee proposal to make a partial reimbursement payment of $150,000 to county government to settle a debt the hospital district owed the county. The HCHD directors took the action at a meeting Tuesday, May 18.

In approving an agreement to make the partial reimbursement, negotiated with county officials to settle the debt, the directors passed a motion, made by Place 6 Director Rhonda Brown and seconded by Board Vice President and Place 4 Director Dr. John Stovall.

The motion was offered to approve the “negotiated settlement with Houston County for ten months ambulance cost (a few years ago) upon preparation (of) appropriate legal documents by the board attorney, Board President and Place 1 Director Barbara Crowson said.

The negotiated reimbursement/settlement agreement between county government and hospital district officials was approved by members of the Houston County Commissioners Court at a meeting Tuesday, May 11, after members of the HCHD board’s Negotiation Committee had met with County Judge Jim Lovell and County Auditor Melissa Jeter and arrived at the proposed partial reimbursement agreement.

The HCHD directors were to make the payment to county government officials immediately after the directors approved the agreement at their meeting.

The directors passed the motion following a board Negotiations Committee report, made by Crowson and discussion by board members.

Place 8 Director Dina, a Negotiations Committee member, noted, “They (county officials) said we owed them one hundred and seventy-four thousand and something (dollars). And our attorney said it was an error that someone did not file an interlocal agreement in the correct timing. And so, he though we only owed them $128,000.

“But we managed to work in between, and we settled for $150,000. And so, we’ve (HCHD board members) agreed … and they (county officials) approved it last Tuesday (May 11) in their meeting to accept $150,000 as final payment over and done with the ambulance. And we’re even with them and they’re even with us, and we’re all happy about it right now.”

Crowson added “And our attorney has provided the settlement documentation so that we will be delivering … a $150,000 check to them (county officials) ASAP. And based upon their signing, (they will) release us from any obligation for that. If you look at it from a monetary standpoint, we saved something over $24,000 for the hospital district.

“And they (county officials) were gracious to do that for us. The county judge was amenable, and he was able to get the county commissioners to vote for that. So, that was very grateful, and it’s another thing that’s kind of off our plate, which we feel real good about, which allows us to look at what we owe in other places. So, that worked out well.

“The interlocal agreement was signed in the summer of 2017 and it’s been dragging on all this time, and we finally have been able to get that done.”

In other business, the board’s oath of office was administered by Stovall to five board members who were unopposed in their efforts to be reseated and seated in positions on the board.

Those board members are Crowson, Place 7 Director Harvey Bruner and Place 9 Director Carol Dawson, who are continuing after serving previous terms on the board, and newly seated Place 3 Director Debbie Kelly and Place 5 Director Roy Langford.

Since all five of the directors were unopposed in seeking positions on the board, the hospital district’s previously scheduled May 1 trustees election was cancelled at a March 23 meeting.

In a reorganization of the board, two existing officeholders—President Crowson and Vice President Stovall—were reelected, and Pipes was elected for the first time to serve as secretary. The officers, who were nominated by the board’s Nomination Committee, will lead the board the next 12 months as officers elections are held annually. 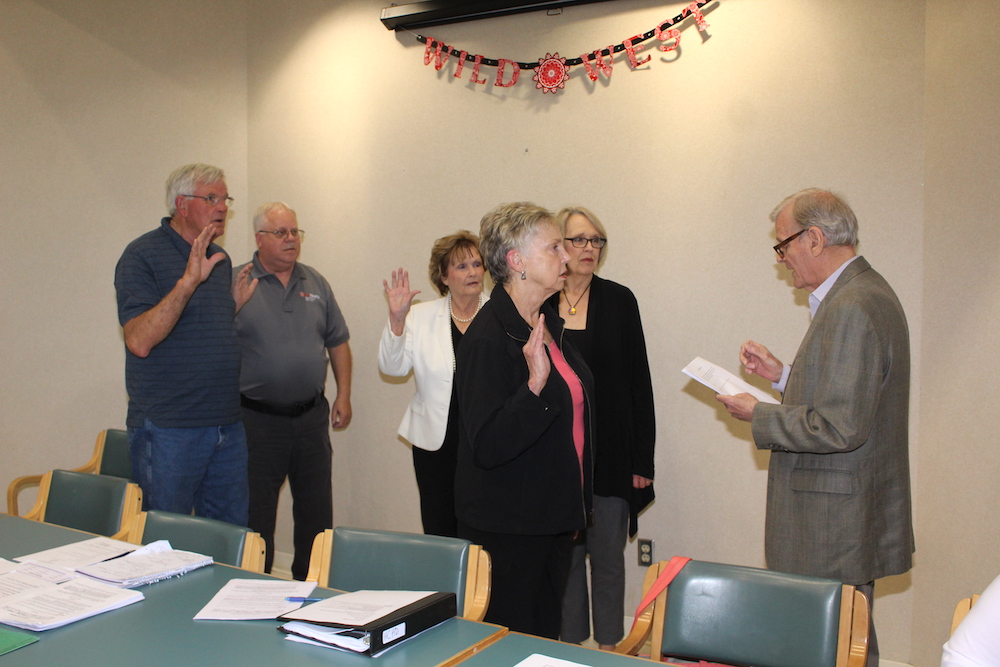 ALTON PORTER | HCC Five continuing and new members of the Houston County Hospital District Board of Directors were administered the oath of office by board member Dr. John Stovall, right. Receiving the oath, from left to right, were Harvey Bruner, Roy Langford, Barbara Crowson, Carol Dawson and Debbie Kelly.

Gallaway reported that Houston County EMS received 294 requests for ambulance services last month and transported 185 patients. “Of those, we life flighted four patients” by helicopter, Gallaway said. “Eighty-four percent of the patients that we transported (to 911 transport destinations), we brought here to Crockett Medical Center.”

Most persons responded to by the provider were neurological patients, but cardiac, respiratory and other categories of patients were served, Gallaway said, adding, “We’ve seen a major decline in the amount of Covid-19 patients. So, that’s always really good news.

A report on operations and activities at Crockett Medical Center (CMC) was presented by CMC Chief Executive Officer Tommy Johnson.

“Mainly, the big thing I want to address tonight is to give you guys kind of an update on our numbers,” said Johnson. “We are almost back to pre-Covid now. We were still probably almost a hundred shy during ER (emergency room) month, which was April. “However, we invested in some new telemetry equipment on the floor. So, our admission rate has gone up.

“We’re keeping more patients because we can now monitor them better. We’re probably … averaging around three and a half patient stay days a month now for each day. So, that means we’re at about three and a half average patients a day. That’s up from about 1.2 or less some months.”

Johnson said a lot of painting, sprucing up and updating have been done to the medical-surgical floor so that it’s compliant with a survey coming up in August.

In another action taken by the directors, they passed a motion authorizing chiller and tower replacements and repairs to be made at the hospital building.

In his report, concerning the chiller repairs that need to be made to the hospital’s air conditioning system, Johnson said, “I guess, during the ice storm, we lost both chillers on top of the school over here.”

He said new chillers have been ordered and are coming and he believes the Federal Emergency Management Agency is going to cover the cost of them because the lost occurred during the storm when Governor Greg Abbott declared this a disaster area.

Johnson asked the HCHD board members to consider this matter and to work with CMC executives and managers on developing a solution on how to address it. The CMC executive said he has received a $186,000 bid to make the chillers and air conditioning towers replacements and repairs to the hospital building.

“What Tommy told us was that their licensure is in the office,” Crowson said. “And so, whatever it’s going to be done about the chillers needs to be done, or at least a plan (needs to be) in place to get it done, as he said. And, of course, the hot season is upon us.

“And so, he says it has to be done; there’s no question about it. He said, as you noted, those things were here when the whole thing was built (around 1969) and the towers. And we did go out and look at them.”

Bruner added to Crowson’s comments about the Facilities Committee meeting, adding, some of the towers are “rusted away” and in “horrible condition” and CMC executives want the hospital district to cover part of the costs to make the replacements and repairs.