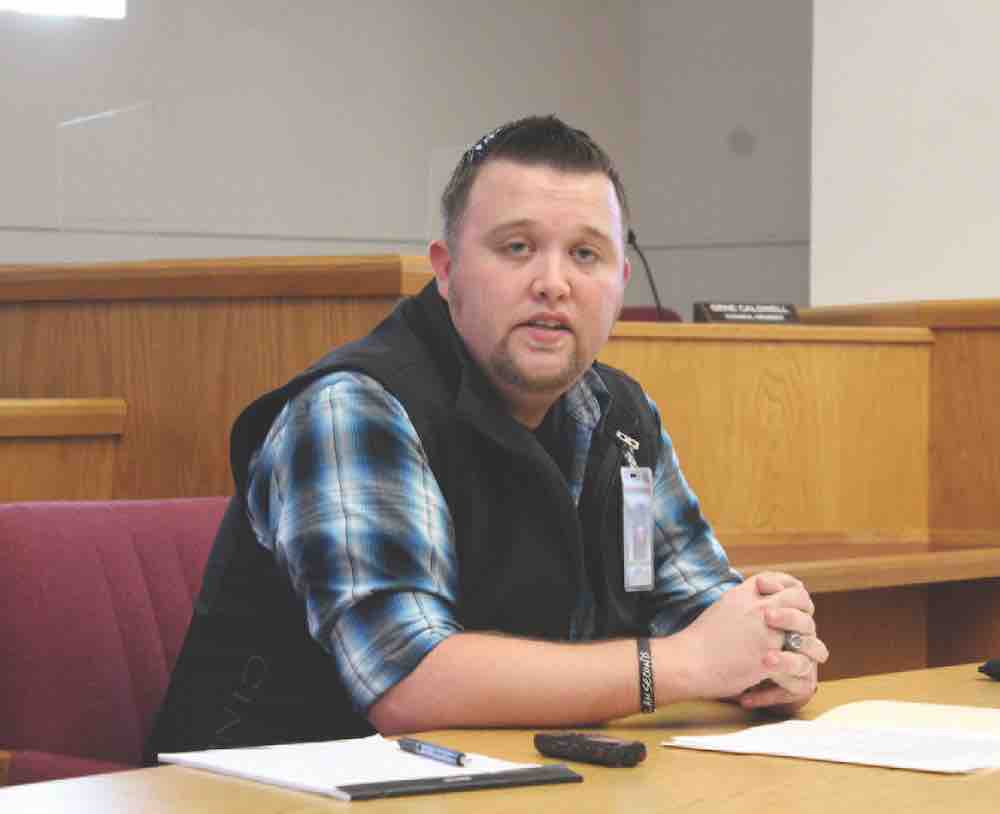 ALTON PORTER | HCC Mark Cunningham, above, of DETCOG, presented a summary of the entity’s five-year transit coordination plan for residents in its 12-county region who have transportation needs or know of available services.

CROCKETT – Staff members of the Deep East Texas Council of Governments & Economic Development District (DETCOG) have held public meetings in the 12 counties the entity covers, including Houston County, to offer and receive information on transportation needs and services in the region.

Low turnouts at the meetings is not stopping DETCOG staffers from attempting to spread information about the plan and collect information from regional residents, Cunningham told the Courier at the Houston County meeting.

“Some of our counties do not have any public transit,” DETCOG Regional Planner Bob Bashaw was quoted as saying. “In some of our counties you can call and schedule a ride a couple of days in advance. Some of our cities have fixed bus routes. The planning process gives us an opportunity to look for better ways these resources could be used.

In addition, the press release states, “Anyone providing transportation is also encouraged to provide information on their services at the meetings. Matching up available rides with needs is an important part of the plan.”

Persons who have needs or know of services and were unable to attend any of the meetings “can also submit comments and information at This email address is being protected from spambots. You need JavaScript enabled to view it.,” Cunningham stated, adding they may also call the DETCOG office in Lufkin at 936-634-2247. Also, “they can call 211—the 211 program—and they can be referred,” he said.

Cunningham said, “We contracted with TxDOT (Texas Department of Transportation) to create a five-year regional transit plan. It’s one that we do every five years through TxDOT. It’s for the DETCOG region.

“The contract was finalized before Jasper (County) was moved to the Southeast Texas Regional Planning Commission. So, they’re still included in this plan.”

Cunningham explained, “Right now, Brazos Transit District is the designated public transit provider in the DETCOG region. They operate demand-response transit services in Houston, Polk, San Jacinto and Trinity counties. And then, they do fixed-route bus services, where the buses just make regular routes in the cities of Nacogdoches and Lufkin.

“So, you can call them for the demand-response, or you can go online—btd.org. Then, the fixed-route bus services—you can find out more about those at btd.org, as well. As of right now, there aren’t any known public transit services in Jasper, Newton, Sabine, San Augustine, Shelby or Tyler counties.”

Cunningham continued, “So, those counties don’t have the bus services from BTD or any others that we know at this point, which is why we’re having these meetings. We’re having the meetings so that we can learn of anybody that is providing transit services to veterans—to anybody, really.

“So, that’s really the whole purpose of these meetings that we’ve been having in each of the 12 counties that makeup DETCOG. We go out in the communities; we ask people if there are people providing that services. We’re making sure that people have the information that they need and making sure we can get to the information so that we can pass it on to TxDOT so they can have it as well.”

Cunningham added, “There are a few providers, like Nacogdoches has a taxi service and Lufkin has a couple of services, as well. But BTD is the main public transit.”

He said the main needs DETCOG and BTD staffers have heard about in the region are medical needs and veterans’ needs, but he was not aware of any in Houston County. “That’s why we’re holding these (public meetings) so that we can hear from the public; so that anybody that has unmet needs, anybody that has ideas of needs, they can go through.”

The Houston County public meeting was DETCOG’s ninth one, Cunningham said. Meetings also were held last week in Angelina, Trinity and three other counties. Meetings were held in the six other DETCOG region counties week before last.

The message Cunningham said he would like to distribute to residents in the region is “just if they know of needs and have ideas of what can be used, to contact us—to reach out to us—and we can pass that along. We want to be able to provide as much help as we can—just to get the word out and to make sure that they can get that (help). We’re here to make sure that we can get that feedback. We are required to have the meetings, but we just can’t stress enough that people need to reach out with anything they’ve got.”

Jo Marlow, of Bryan, BTD’s vice president for marketing and communications, who was present at the Houston County meeting and attended several others, according to Cunningham, confirmed Cunningham’s statement that Brazos Transportation District provides transit services in several counties in the region.

“We provide a demand-response service. It’s a door-to-door service where people can—we would pick them up from one location and take them to another location. Here in Crockett, the majority of our transit needs are mainly medical—people getting to and from doctors’ appointments or hospital visits—something like that—or a pharmacy.

“Our services are available to anybody,” said Marlow. “You don’t have to be disabled to use it. We’ll take you anywhere you’ve gotta go within Houston County.”

To request BTD’s services, a person must first fill out a short application; “and then, if you want to call or schedule a ride, we’re going to need your pick-up location and your drop-off location, and if you’re going to an appointment or something, we need to know what time you need to be there,” Marlow said.

The phone number to dial to request services is 979-778-0607, BTD’s main office number, and the caller will be transferred to its dispatch office to talk to a dispatcher to get setup for their trip, she said. “You can call up to a week in advance. As soon as you know when you’ve got an appointment, I would suggest calling because we do fill up pretty fast.

“We do offer same-day service, but that’s just based on availability if we have the space and the drivers available, but I would suggest that you do it as soon as you can.”