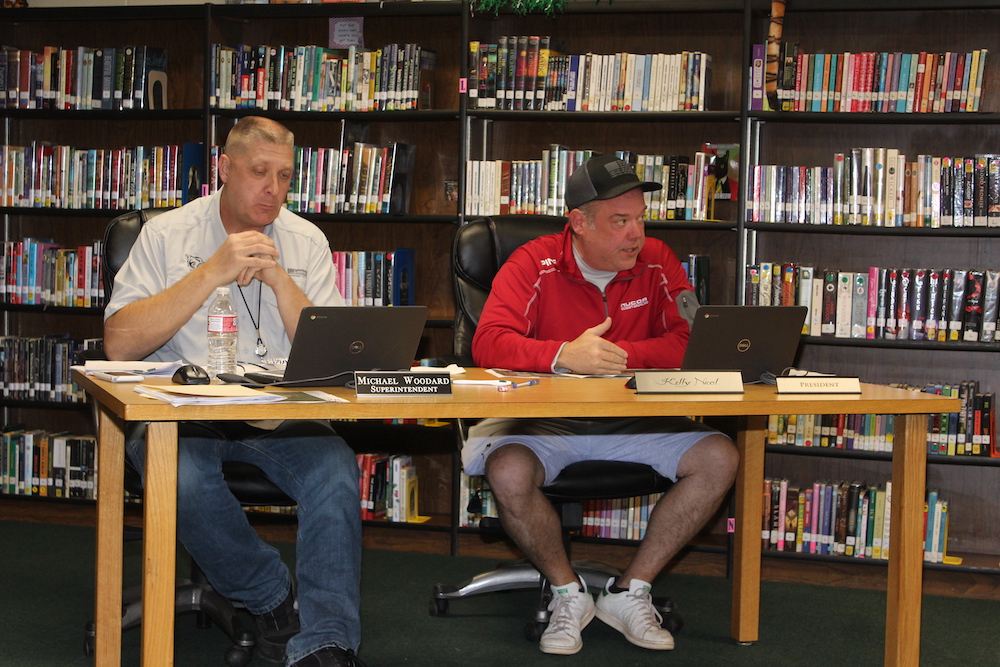 ALTON PORTER | HCC Board President Kelly Nicol, left, of the Latexo ISD Board of Trustees, and District Superintendent Michael Woodard spoke and heard comments from other board members about the district’s $5 million bond construction project and other matters at a special meeting of the trustees Thursday, March 4.

Latexo school trustees gathered for a special meeting at which they discussed plans for the construction of facilities as part of the school district’s $5 million bond construction project and addressed other matters.

“We’re really excited moving forward with the bond construction,” Board President Kelly Nicol said in a statement summarizing that discussion after the meeting was adjourned. “We’ve settled on our placement of the buildings (on the district’s elementary and secondary school campuses). And I think we’re moving forward and looking forward to getting the architectural drawings to be able to start bidding out through the bidding process.”

The bond project includes the planned construction of a multi-use, multi-faceted facility that will be used as a gymnasium and for the holding of community events, as well as other additions and upgrades to district buildings, including a new career and technical education (CTE) building and an elementary school cafeteria.

Nicol said, so far, the district officials have not run into any problems or major issues in their construction planning process, adding, “I think we’ve pretty much decided on the location of the gym and CTE building, and also the cafeteria down in elementary. And things are just moving forward.

“We will be using this 9.2 scheme (a version of a drawing prepared by Goodwin-Lasiter-Strong architects and delegated for the project), and we’ve decided where this building (the multi-purpose facility) is going to go and the CTE classrooms and locker rooms.”

“And down here (on the elementary school campus), this will be the cafeteria,” the board president said, referring to portrait of the scheme. “And those are what we decided on tonight. Everything else is kind of down the road.

“These (the gym and CTE facilities) are the main two buildings we needed to approve tonight.” He said the planned cafeteria will be attached to the back of the current gym on the elementary school campus.

“This (construction of all the facilities in the bond project) has been something that our community’s needed for a long time,” Nicol said. “We’re moving forward—looking forward to it. I’m happy to be a part of getting it for them. The whole board is looking forward for the community to get what they’ve been wanting for a while.”

The trustees voted to pass a motion to “approve scheme 9.2, with the location of the multi-purpose center,” along with the elementary cafeteria and CTE building, as presented.

In related actions, the trustees approved payment of $4,900 for geotechnical engineering services and voted to authorize Superintendent Michael Woodard to look into another situation and possibly negotiate the cost in a contract with Goodwin-Lasiter-Strong and get the best price he can for a survey to be conducted on the district’s land, buildings and attached properties on both of the district’s campuses before designing the planned bond facilities. Goodwin-Lasiter-Strong representatives had offered to conduct the survey for $7,200.

In other business, the trustees approved a missed school days waiver for 2020-2021, authorizing Woodard to go online to the Texas Education Agency (TEA) website and request approval of the waiver by the state so that the district doesn’t lose any state funding for employees for the days missed due to “the bad weather that we had” last month, the superintendent said.

In a similar action, the trustees voted to approve a resolution “authorizing all employee pay for bad weather days.” This is to “make sure all employees get paid for the same days that they missed work,” Woodard said. “That’s for all employees to make sure they don’t miss any paycheck.”

Woodard noted that the board’s regular meeting for this month is being moved to Thursday, March 18, beginning at 6 p.m. The meeting was originally scheduled for March 11, but “that’s our spring break,” Woodard said.

Concerning “the mask situation across the state,” Woodard said, “As you all know, the governor came out (Tuesday, March 2) about no more masks and (opening the state) 100%, starting Wednesday (March 10). 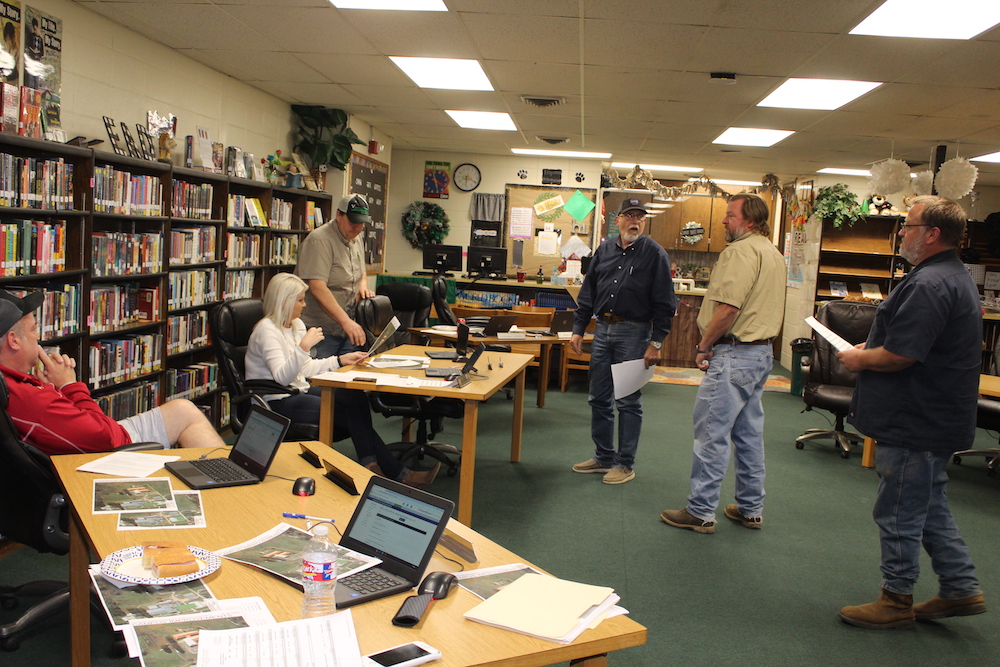 ALTON PORTER | HCC Members of the Latexo ISD board of trustees, above, discussed and approved a scheme for the location and plans for buildings to be constructed as part of the district’s $5 million bond project and acted on other matters at a March 4 special meeting.

“We were waiting on TEA and UIL (University Interscholastic League) to say anything. So, what TEA did say: ‘The governing body, which is the school board, may modify or eliminate by formal action the above mask-related requirements.’

“UIL came out and said pretty much the same thing. That, ‘Consistent with TEA guidance, School systems’ governing bodies may modify or eliminate mask-related requirements. Schools may determine spectator capacity and seating arrangements for UIL events.’ So, the mask can go away.”

Woodard added, “The only thing that’s still in play is the CDC (Centers for Disease Control and Prevention) guidelines with conract tracing…. We haven’t had any cases here in a month. I was the last one that got sick here.

“I have talked to the principals and they’re okay with doing away with the masks and putting it back on who wants to wear it can wear it. I talked to, of course, the coaches—Coach (Greg) Horn. He said, if that’s what does happen, then he’ll probably make his players still wear masks. That way, they’re covered in case something does happen.

“If something does happen, then you’ve got to quarantine. They’re going to be out 10 or 14 days, until CDC changes what they have to do.

“I think the governor caught everybody off guard when he made his announcement” lifting the statewide facemask mandate.

Woodard said he recommends that those who want to wear a masks do so. He said the school district has no need to change anything it is currently doing, including continuing remote learning, an option being utilized by some students.