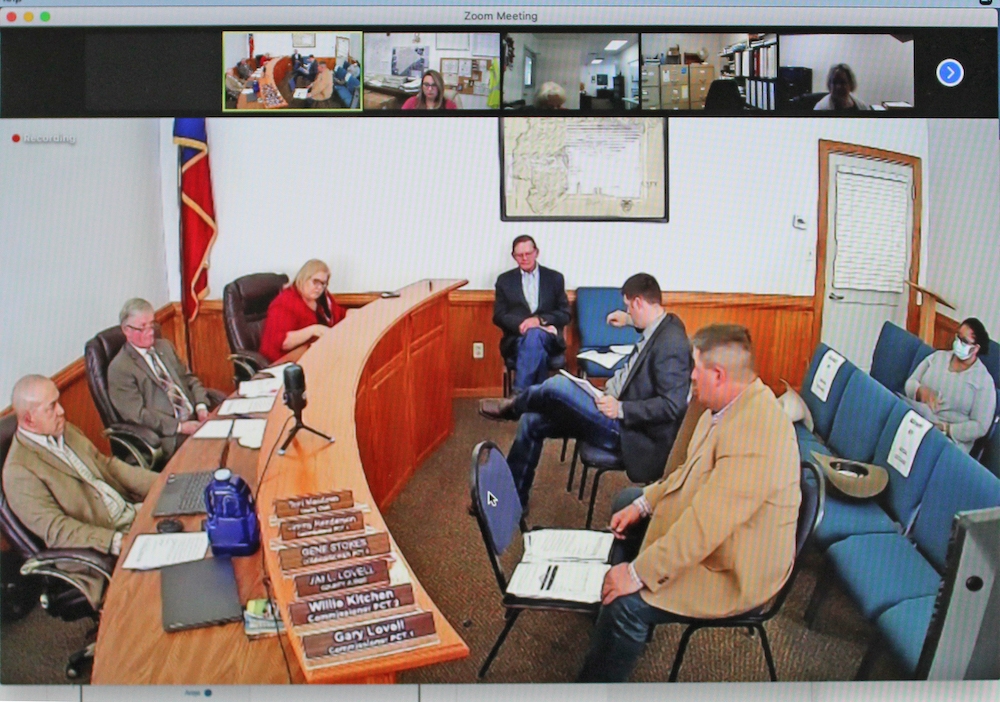 ALTON PORTER | HCC Houston County Judge Jim Lovell issued a Declaration of Local Disaster for the county in response to the recent severe winter storms that wreaked havoc on the county and the county’s commissioners voted to receive the declaration as information at a meeting held in person and via the Zoom video communications app Thursday morning.

Houston County was declared a disaster area by the county judge as a result of the major winter storms that wreaked havoc throughout the county a couple of weeks ago and the declaration was received by county commissioners.

Saturday, Feb. 20, Judge Jim Lovell issued a seven-day Declaration of Local Disaster for the county. And five days later, at a meeting of the commissioners court, following explanations by Lovell and county Emergency Management Coordinator Heath Murff, the commissioners voted to pass a motion to receive as information the declaration.

The declaration stated that “the County of Houston, on the 14 day of February, AD 2021 suffered widespread or severe damage, injury, or loss of life, with massive amounts of debris creating a public health threat (or there is imminent threat of same), resulting from the arrival of a major winter storm that has impacted Houston County and caused freezing temperatures, snow and ice accumulations.”

Because the county judge determined that extraordinary measures must be taken to alleviate the suffering of people and to protect or rehabilitate property, he declared the state of disaster.

The declaration noted that the county’s emergency management plan was implemented, and “Whereas Section 418.108 of the Texas Disaster Act of 1975, as amended, Vernon’s Texas Codes Annotated, Government Code Chapter 418, provides that the state of disaster shall continue for a period of not more than seven days of the date hereof, unless the same is continued by consent of the Commissioner’s Court of the County of Houston, Texas.”

The commissioners and Crockett city councilmembers approved a tax abatement agreement with Lincoln Lumber several weeks ago, and the Crockett officials later approved a related agreement that had been amended. County officials are now considering whether to terminate their original agreement and approve the amended one that was adopted by the city.

“What happened is Houston County and Lincoln Lumber have a tax abatement agreement…,” said County Attorney Daphne Session. “That was approved in November of 2020 based on the application for a tax abatement.

“The city entered or approved a tax abatement agreement in November of 2020 also with Lincoln Lumber. Then, Lincoln Lumber made some acquisitions and made some new purchases of land in the area.”

Lincoln Lumber is building a high-tech sawmill in the 200 block of West Austin Street and on two adjoining properties.

In another action, the commissioners approved a new contract with Piney Woods Sanitation for solid waste collection service in unincorporated areas of the county.

They voted to approve motions appointing commissioners Jimmy Henderson, Gene Stokes and Willie Kitchen to negotiate for right of way and construction/temporary easements in their precincts as necessary for the Texas Department of Transportation bridge improvement project.

The commissioners received as information racial profiling reports from county law enforcement agencies and an audit report for the fiscal year ending 2020 for county Emergency Services District No. 2.

They approved an order declaring an exemption from bidding necessary to preserve and protect the public health and safety of county residents as authorized under Local Government Code 262.024(a)(2).

The commissioners voted to approve acceptance of a $2,000 donation from the city of Kennard for Precinct 4 and to authorize the making of necessary budget amendments.

During her presentation, Smith noted that the Houston County Fair and Youth Livestock Show is still one for late March and early April.