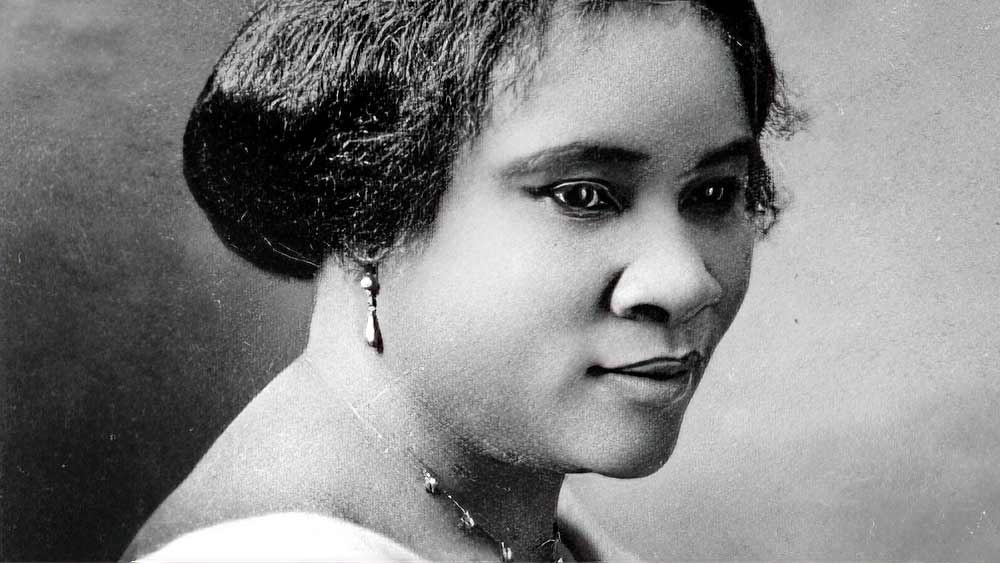 It’s difficult to imagine that the daughter of two slaves-turned-sharecroppers would eventually become the wealthiest African American woman in the United States, but that’s precisely the rags to riches story behind entrepreneur Madam C.J. Walker.

One of Owen and Minerva Breedlove’s six children, Sarah Walker was orphaned at age seven and moved in with her older sister, Louvenia, where they worked the cotton fields near Vicksburg, Mississippi. To escape her abusive brother-in-law, Walker married at fourteen and gave birth to her only daughter in 1885. Widowed two years later, Walker decided to take her daughter, A’Lelia, and move north to St. Louis, Missouri, where her older brothers had already established businesses as barbers.

With only three months of literacy lessons obtained during Sunday school at the church she attended as a child, Walker’s employment opportunities were limited. She took a job as a washerwoman, doing laundry from sunup to sundown, earning only pennies a day. To the casual observer, it would seem as though Walker was destined for poverty. But when she joined the St. Paul African Methodist Church in St. Louis, her life took an unexpected turn. Walker’s great-great-granddaughter, A’Lelia Bundles, explained. “At St. Paul A.M.E. Church, there were women who were educated schoolteachers and others who were leaders in the community who looked for women [like Walker] to encourage them in whatever way they could.” The church women mentored Walker and gave her a vision of what she might become. “That was part of what propelled her,” said Bundles.

Most homes lacked indoor plumbing and running water, so hair washing was infrequent, and the same harsh ingredients used to do laundry were also used to cleanse hair. Lice and inadequate nutrition also made it difficult to maintain healthy hair. Because of this, Walker developed a scalp ailment that led to severe hair loss. Some women wore head wraps to hide their bald patches, but Walker didn’t want to follow that path. She felt that such attire would signify her lower social status at a time when she sought to elevate herself. So using her brother’s haircare knowledge, she started experimenting with homemade ointments. She also purchased a product from Annie Turnbo Malone called “The Great Wonderful Hair Grower.”  Malone was an African American female entrepreneur with a successful hair care line. Walker eventually became a selling agent for Malone’s product, Poro.

A year later, Walker moved to Denver, Colorado, and married newspaper ‘ad-man’ Charles Joseph Walker. Knowing that she wasn’t the only black woman experiencing hair loss, Walker used the knowledge gained from her brothers and her work with Poro, invested $1.25 for ingredients and packaging, and launched her own line of hair products known as “Madam C.J. Walker’s Wonderful Hair Grower.” She sold the scalp conditioning and healing formula door-to-door and educated women at black churches across the country on how to groom and style their hair.

While Walker’s husband taught her the importance of advertising and helped establish her mail-order business, he didn’t share her vision for a haircare empire. The couple divorced in 1910. Walker moved to Indianapolis, where she established the Madam C.J. Walker Manufacturing Company headquarters. She later built a factory, hair salon, and beauty school. Between 1911 and 1919, Walker employed 40,000 African American women and men in the U.S., Central America, and the Caribbean.

Walker taught other black women how to develop and maintain a budget, build their own businesses, and encouraged them to become financially independent. Many of her management and key staff positions were held by black women.  In 1917, she founded the National Negro Cosmetics Manufacturers Association.

As her wealth increased, so did Walker’s political and philanthropical reach. Walker dedicated herself to anti-lynching activism, donating $5,000 to the NAACP – the largest gift from an individual that the NAACP had ever received. She helped raise funds to establish a YMCA in Indianapolis’s black community. She gave $1,000 to the Senate Avenue YMCA, contributed scholarship funds to the Tuskegee Institute, and bequeathed nearly $100,000 to orphanages, institutions, and individuals. Her will directed two-thirds of future net profits of her estate to be funneled into charity.

In 1916, Walker joined her daughter in New York, leaving the company’s day-to-day operations to her management team. In 1917, construction began on Walker’s dream home - Villa Lewaro - a $250,000 mansion built on the banks of the Hudson at Irvington and designed by black architect Vertner Tandy. Walker intended for the Villa to become a gathering place for community leaders and an inspiration for other African Americans to pursue their dreams. She moved into the house in 1918 but died a year later at the age of 51 of complications from hypertension before she could see her vision realized.

According to Bundles, Walker was worth more than one million dollars at the time of her death, making her the wealthiest African-American woman in America. Her hair products continued in popularity for decades after her death. Following a period of company dormancy, the line was relaunched as MADAM by Madam C.J. Walker in 2022.

Madam C.J. Walker’s story is an inspiration, and her advice is as relevant to women today as it was in the early 1900s. “Don’t sit down and wait for the opportunities to come. Get up and make them.”