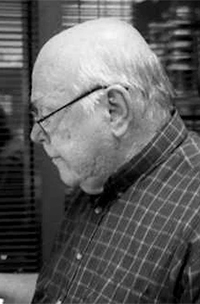 Chester RossenBy Jan White
This email address is being protected from spambots. You need JavaScript enabled to view it.

An article in the December issue of Texas Monthly paid tribute to a local resident who was somewhat of a celebrity at the magazine. Chester C. Rosson, Jr. longtime employee of Texas Monthly, recently passed away. But he left a legacy that most of us could only dream of aspiring to.

Rosson was born at Camp McCoy in Wisconsin but returned to his father’s hometown of Crockett, in junior high.

He studied German and biology at Rice University. Rosson began his career at Texas Monthly in late 1975 as a copy editor, part of the group of Rice University alumni who founded the magazine and brought it to prominence as a national publication. When his wife Barbara took a job editing at Cornell University Press, Rosson left the magazine. Two years later, in 1981, the family was back in Houston, where their son Robin was born. A year after that, Rosson returned to Texas Monthly, where he held several positions – writer, editor, but most notably as the magazine’s top fact-checker.

Rosson’s legacy might not have been as outwardly prestigious as that of the writers whose names are often synonymous with longtime readers – names like Skip Hollingsworth, Mimi Schwartz or Jan Reid, but he was a hero among the behind-the-scenes staff, the ones who labor over page layouts, enforce spelling and grammar rules, and ensure the magazine makes it to the mailboxes. His praises were sung, not by the readers, but by his colleagues who recall his tireless efforts, his cheerful attitude, and how he would start every day with the greeting “Is everything wonderful yet?”

Michael R. Levy, who founded Texas Monthly in 1972, said this about Rosson, “The writers get the glory, but every one of them knows that without the fact-checkers and copy editors—without the Chester Rossons—truly great journalism is not possible.”

Coworkers would describe Rosson as an “odd duck” built like a snowman, short and round, with a halo of thin white hair lying low on his mostly-bald head. And he had a penchant for wearing “thrift store safaris,” as one colleague noted. But his outward appearance belied the talents within. Rosson was a trained vocalist and a lover of all kinds of music, from Gilbert and Sullivan to Bach to eclectic Roky Erickson. He spoke in a deep baritone voice and would quietly hum while sorting through papers or might suddenly break out into song while walking through the break room for his morning coffee.

Rosson was fondly known as a pack-rat. His workspace overflowed with treasures from his various adventures – things like albums and small sculptures, books and photographs. He loved to bake cakes for his colleagues’ birthdays, loved to talk about composers and music, and he genuinely cared for people.

His colleagues at Texas Monthly remember Rosson fondly. “Well-read, curious, chipper, loyal, gentle, with a voice like a nightingale, a patient listener, unfailing kindness, had a great love of Texas. He had a sly smile and a gentle spirit, slow to anger and quick to recover his composure. Everybody adored him.”  These were just a few of the accolades afforded him. The complete list is long and filled with anecdotes about his personality and quality of character.

Although Rosson lost his battle with cancer, he left an indelible mark on the minds and hearts of his friends and colleagues.

You can read the complete article at https://www.texasmonthly.com/being-texan/chester-rosson-remembrances