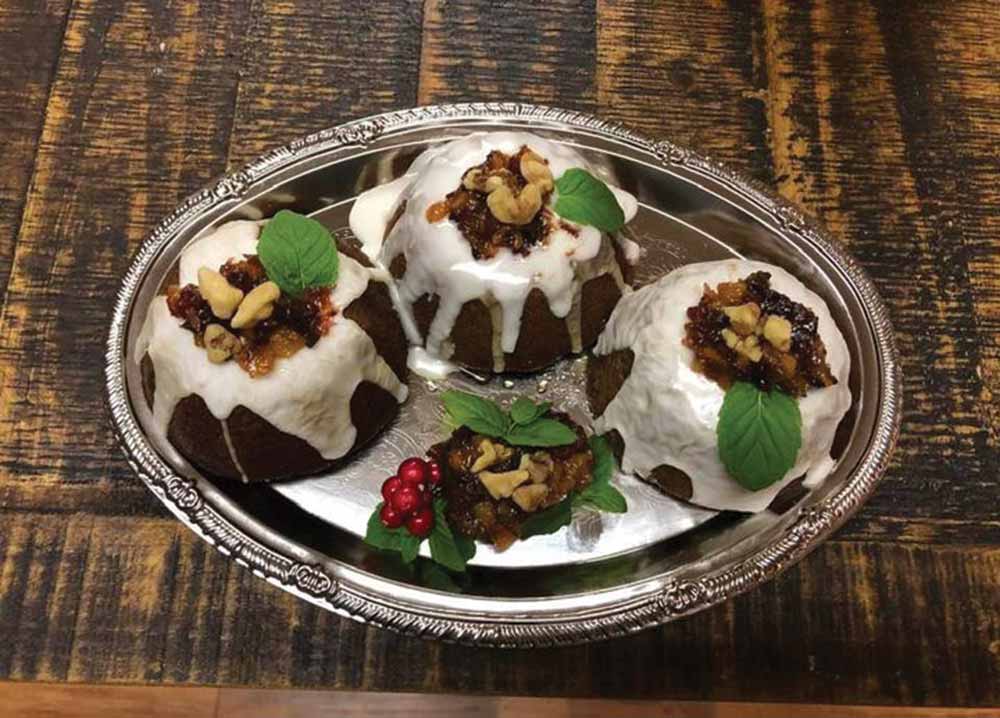 One of our favorite Christmas traditions is singing Christmas carols. There’s something about the cheerful nature of the season that lends itself to song. Who doesn’t love to hear a rousing chorus of Here Comes Santa Claus or the reverent hymn, Silent Night? But some carols contain words that, honestly, we are unfamiliar with today.

Take the song, Here We Come A-Wassailing. Wassailing? What’s that? Then there are the lyrics, “Oh, bring us some figgy pudding… and bring it right here.” What in the world is figgy pudding? Is it actually made from figs? And why are the people singing it so demanding?

To answer these burning questions, we have to take a look at history.

The word “wassail” is a derivative of the phrase, “wæs hāl” or “be hale or whole.” It was a toast used during the Middle Ages to invoke blessings on farmers and their crops and livestock. Wassail was also the name given to the hearty drink imbibed during the toast. Initially, wassail was made of mulled ale, curdled cream, roasted apples and eggs, spices, and sugar. Well-wishers or “wassailers” would fill a large bowl, dubbed the wassailing bowl, with the warm drink. Then they would go door-to-door singing songs and entertaining their hosts in hopes of receiving food or coins. The wassailers would offer the homeowner a drink from the wassailing bowl for his generosity.

Unfortunately, the drinking celebration took a downward turn. One folklorist wrote that “drunken bands of men and boys would take to the streets at night, noise-making, shooting rifles, making ‘rough music’ and even destroying property as they went among the wealthy urban homes.”  What began as a happy tradition had degraded into a form of drunken begging and rabblerousing.

So what does this wassailing debauchery have to do with Christmas caroling?

During the Victorian era, there was a strong religious drive for higher moral standards and social values and reform. In an effort to tame Christmas, the celebration started to focus more on children, helping out the needy and lessening the need for begging. At the same time, music publishers started releasing commercial Christmas carols for purchase by the general public. This push toward family-friendly festivities involving less alcohol and more goodwill paved the way for the transition from the original tradition of wassailing to Christmas caroling as we know it.

And the line from We Wish You a Merry Christmas with carolers demanding figgy pudding and refusing to leave until they get some? It was just a throwback reference to the more barbaric era of wassailing.

Now about that figgy pudding.

First, let’s be clear. The American and British definitions of “pudding” are very different. What we call pudding in the United States is called “custard” to those living in the U.K. These ‘puddings,” as the British refer to them, are dome-shaped cakes that can be sweet or savory. Because the first puddings were meat-based, historians believe that the term figgy was derived from the name of a dish made of fish and curds called “figé.” The first version of figgy pudding surfaced in the 14th century and was a savory dish containing beef, mutton, fruit, and wine. By the end of the 16th century, as dried fruit became more plentiful, the pudding had transitioned from savory to sweet.  And despite the name, the dish typically does not feature figs.

As with wassailing, figgy pudding became standardized during the Victorian era. The ingredients were suet, brown sugar, raisins and currants, candied orange peel, eggs, breadcrumbs, nutmeg, cloves, allspice, and an abundance of alcohol. Preparation for the Christmas pudding began the Sunday before Advent. The tradition was known as “Stir-up Sunday.” Families would gather to take turns stirring the pudding, which was then wrapped and boiled and set aside to mature until Christmas Day when the pudding was doused with brandy and set afire. Even Charles Dickens included the custom of Christmas pudding in his 1843 book A Christmas Carol… “In half a minute, Mrs. Cratchit entered—flushed, but smiling proudly—with the pudding, like a speckled cannon-ball, so hard and firm, blazing in half of half-a-quartern of ignited brandy, and bedecked with Christmas holly stuck into the top.”

Because authentic figgy pudding is time-consuming and labor-intensive, few people nowadays make it from scratch. But if you get curious about figgy pudding, you might give this recipe a try. And just to get you in the right frame of mind, go ahead and sing a few choruses of We Wish You a Merry Christmas.

Before you begin, soak the dried fruits overnight in ¼ cup to ½ cup of brandy. You could skip this process, but you’ll appreciate the results more if you don’t.

2. In a large mixing bowl, cream the butter until light and fluffy. Add the eggs and molasses and beat until blended. Stir in the orange peel, buttermilk, rum extract, cinnamon, cardamom, nutmeg, allspice, and cloves.

3. Sift together the flour, baking soda, baking powder, and salt in a separate bowl. Add the dry ingredients to the butter-egg mixture and blend well.

4. Pulse or finely chop the brandy-soaked fruit. Add the fruit and walnuts to the mixing bowl and blend until well incorporated. Spoon the batter into the prepared tube pan.

5. Bake for 50 to 60 minutes, or until a toothpick inserted in the center comes out clean. Allow to cool for 10 minutes in the pan, then carefully remove to a wire rack. Serve in slices with rum sauce.

3. Heat over medium heat until the sugar is dissolved and the mixture begins to bubble.

4. Add the cream-cornstarch mixture and continue cooking until the sauce is smooth and thick.

5. Drizzle the sauce over individual slices of the cake and top with a bit of additional nutmeg if desired. Store leftover sauce, tightly covered, in the refrigerator.