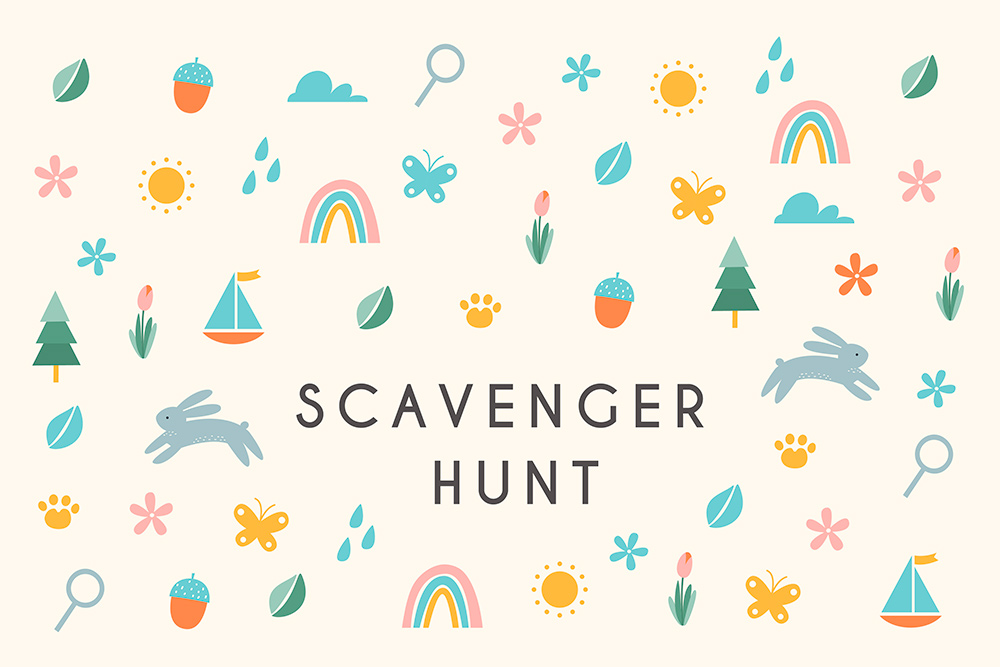 East Texas roadtrippers participating in the Great Outdoors Scavenger Hunt have seven stops to make close to home. Those locations are:

In response to the French settling on the Texas coast in 1685, the Spaniards built Mission San Francisco de los Tejas near a Caddo Indian village in 1690 — the first mission in the province of Texas. While the original mission was destroyed more than 300 years ago, the Civilian Conservation Corps built a representation of the mission in the 1930s, and it still stands today.

Snap a selfie in front of the replica Mission Tejas.

With more than 13 miles of trails, Tyler State Park is the perfect place to explore the Pineywoods region of Texas. Don’t miss the Whispering Pines Nature Trail, a 1-mile loop constructed by the CCC that passes through mixed hardwood-pine woodland. Walk quietly and you may spot a cardinal, tufted titmouse, red-bellied woodpecker or gray squirrel.

Snap a selfie at the Children’s Wading Pool area along the Whispering Pines trail.

Lake O’the Pines may be the most beautiful lake in East Texas you’ve never heard of. This nearly 17,000-acre lake is encircled by tall, gorgeous pine trees, and is located miles from the hustle of the city. There are several parks surrounding the lake; a favorite is Brushy Creek Park, with its heavily treed picnic area that overlooks a great swim beach.

Since it’s Lake O’the Pines, snap a selfie with the lake — and some pines! — in the background from any of the parks surrounding the lake.

Snap a sky-facing selfie beneath the shade of a giant pine tree.

Until Gatlinburg, Tennessee, stole the title in 2019 with the 680-foot SkyBridge, the Rusk Footbridge held the distinction of being the longest footbridge in America. Originally built in 1861, this 546-foot footbridge provided early settlers a means of travel to get into town during the rainy season, when the nearby creek flooded the valley. While road construction made the bridge unnecessary for commercial transportation, the bridge still allows visitors to Rusk an opportunity to stroll across this engineering marvel and enjoy the surrounding nature.

Snap a selfie along the Rusk footbridge.

In the 1870s, Black workers in the lumberyards of East Texas developed a new style of piano music while playing in camp barrel houses. Originating in Marshall, the music was first known as "fast western," but came to be known as “boogie-woogie.” Future boogie-woogie masters Floyd Dixon, Dave Alexander and Huddie “Lead Belly” Ledbetter (who adapted the style to guitar) all grew up in the Marshall area.

Snap a selfie with the “birthplace of Boogie Woogie” marker, located on the north patio of the Ginocchio Hotel.

Stanley’s Famous Pit BBQ makes some of the best brisket in East Texas. Under the watchful eyes of owners Nick and Jen Pencis, who took over after the death of founder JD Stanley, the restaurant continues to serve up drool-worthy barbecue that’s worth the meat sweats.

Snap a selfie under the restaurant’s neon sign, or with a plate of food. 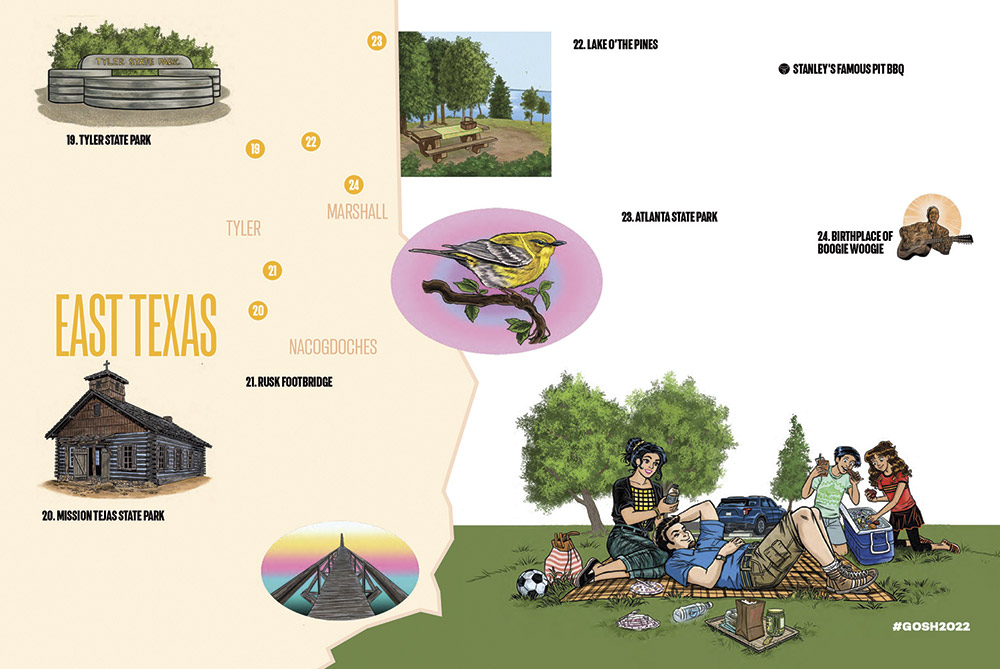 AUSTIN — Summer’s going by fast but there’s still time to jump in the car for an unforgettable road trip, near home or across the state.

The Texas Parks & Wildlife magazine’s Great Outdoor Scavenger Hunt (GOSH) returns for a third year of carefree fun across Texas. Travel to various locations on the magazine’s list, take a selfie and post it with the hashtag #GOSH2022. Discover history, wildlife, parks, waterways and quirky attractions — plus some classic eateries to visit and an iconic Texas soundtrack on Spotify and Apple Music as a “bonus” to enjoy along the way.

Select from seven regions: Dallas, Central Texas, Houston, East Texas, Panhandle, South Texas and West Texas. Register on the Texas Parks and Wildlife magazine website or the contest page, then find the spot, take a smiling selfie and tag it on Twitter or Instagram with #GOSH2022. Participants can also post and tag it on the magazine’s Facebook page. Complete one or all GOSH activities.

"We are so ready to hit the road for some fun," says Texas Parks & Wildlife magazine editor Russell Roe. "GOSH inspires those day trips that make lifelong memories. Pack the ice chest and your swimsuits and hit the road for a summer of fun. Share selfies everywhere you go, and you’ll have bragging rights for being great Texas adventurers."

East Texas road trippers can celebrate the “birthplace of boogie woogie” by taking a selfie at the Ginocchio Hotel’s commemorative marker in Marshall, then head over to the Children’s Wading Pool at Tyler State Park for a cool-off. Fill up on your favorite smoked meat at Stanley’s, then walk it off on shady trails at Mission Tejas State Park, Lake o’ the Pines or

Atlanta State Park. All the details can be found at GOSH 22 East Texas Region.

In the Dallas area, take selfies on the terraced steps at the Fort Worth Water Gardens and in front of the family’s 1876 farmhouse at Penn Farm at Cedar Hill State Park. Stop in at Babe’s Chicken Dinner House to see the electro-magnetic wave contraption and go take a gander at the quirky Chairy Orchard in Denton. Explore the post hospital at Fort Richardson State Park and Historic Site. Check out more locations for the Dallas area at GOSH 2022 Dallas Region.

In Central Texas, learn about the Great Western Cattle Drive at Western Trail Heritage Park in Bandera. Take a refreshing break in the pool at Lockhart State Park and find Bear Creek Falls at Wild Basin Wilderness Preserve. Search for mermaid statues all around San Marcos and the Willie Nelson statue in Austin. Step under the huge cherry pie slice sculpture over the door to indulge yourself at the Texas Pie Company in Kyle. Visit GOSH 2022 Central Texas Region for more information.

In the Houston area, head to the five miles of coastline at Sea Rim State Park and snap your selfie on the nature boardwalk.

Enjoy a musical interlude with Janis Joplin’s Porsche replica in Port Arthur and follow the Father of Texas to Stephen F. Austin State Park in San Felipe. Have some Blue Bell from the factory in Brenham while you enjoy the world’s longest car wash at Buc-ee’s in Katy. GOSH 2022 Houston Area has more details.

In the Panhandle, check out the Texas State Longhorn Herd, then snap a selfie under the “Texas” archway at the Pioneer Amphitheater at Palo Duro Canyon State Park. Spend a day in nearby Canyon exploring the exhibits at Panhandle-Plains Historical Museum. At Lake Fryer, or camp out and enjoy the fishing. Movie buffs will enjoy seeing the Tower Station in Shamrock for a glimpse at the inspiration for a location in Pixar’s Cars. For more information about GOSH 22 locations in thePanhandle, check out GOSH 2022 Panhandle Region.

InSouth Texas, wildlife abounds, so follow the birds to Quinta Mazatlan, one of nine World Birding Center spots in the region and snap a selfie by the ornately carved door. Sea Turtle Inc. on South Padre Island is a must-see for up-close experiences, then head over to the Laguna Madre Nature Trail’s boardwalk to walk among roseate spoonbills and herons. Snap a selfie at world’s largest killer bee statue in Hidalgo. Visit GOSH 2022 South Texas Region for more information. 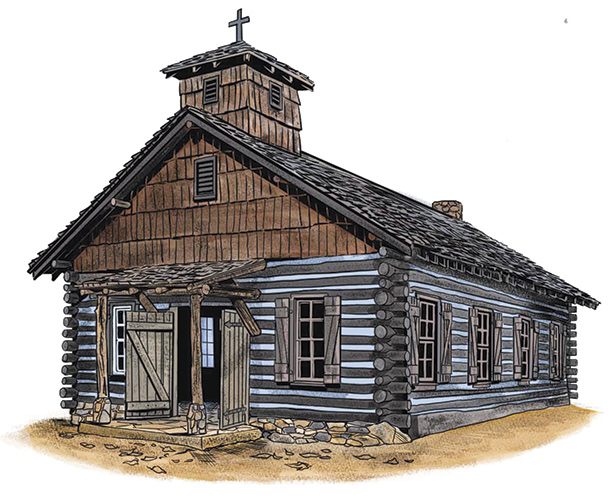 Mission Tejas State Park at Weches is one of the East Texas stops on the Great Outdoor Scavenger Hunt.In West Texas, Balmorhea is back after repairs, so it’s time to swim with the fish in the state park’s incredible spring-fed pool. The Barton Warnock Visitor Center,at the eastern entrance of Big Bend Ranch State Park, is newly renovated or find the “best little bird blind in Texas” at Davis Mountains State Park. Turn the camera around to place yourself among your musical heroes at the Printco Building mural in Alpine. Visit GOSH 2022 West Texas for more information.

See how to enter, rules, where to upload your selfies and more information on challenge locations regionally or statewide atTPWD GOSH 2022.

Complete all the activities in a region and you’ll get a handsome, downloadable certificate commemorating your achievement, along with a shout-out in a future issue of Texas Parks & Wildlife magazine, in which we’ll salute our GOSH participants. Statewide completers win a chance at other prizes.

Regional graphics highlighting GOSH challenge locations across Texas can be found on the TPWD Flickr Page. 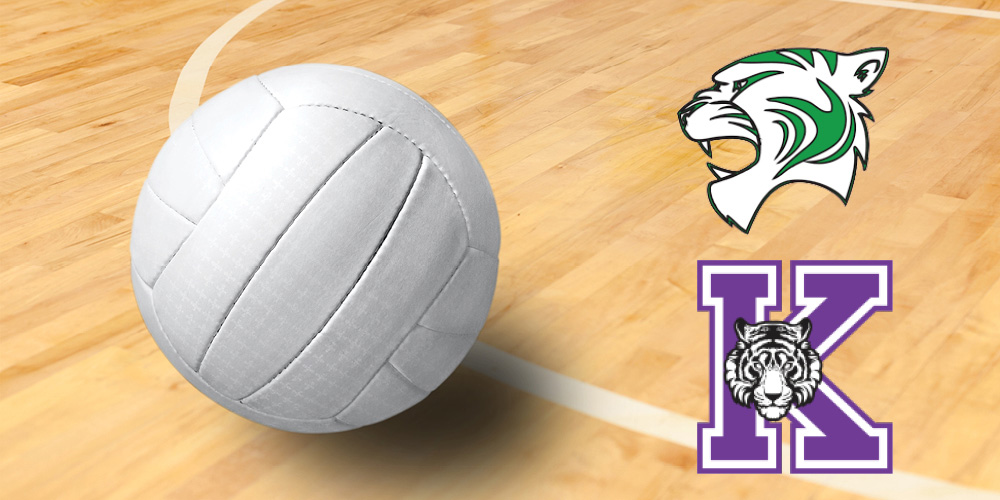 Volleyball players from all Houston County schools are welcome.

Registration is $50 and is being conducted online. Contact coach Greg Horn for a registration link at This email address is being protected from spambots. You need JavaScript enabled to view it..

The Kennard Volleyball Camp will be held July 19-22 in the high school gym.

Junior high (incoming sixth, seventh and eighth grades) will check in at 7:30 a.m. each day. Individual skills and team skills will be conducted from 8 a.m. until 11:45 p.m.

Check in for high school (incoming ninth through 12th) will be 1:30 p.m. daily. Individual skills and team skills will be conducted from 2 p.m. until 5:45 p.m.

Cost is $100 per athlete with a sibling discount of $50 off total. Fee includes water bottle. Gatorade and snacks. Cash or check payable to KISD is due on first day. 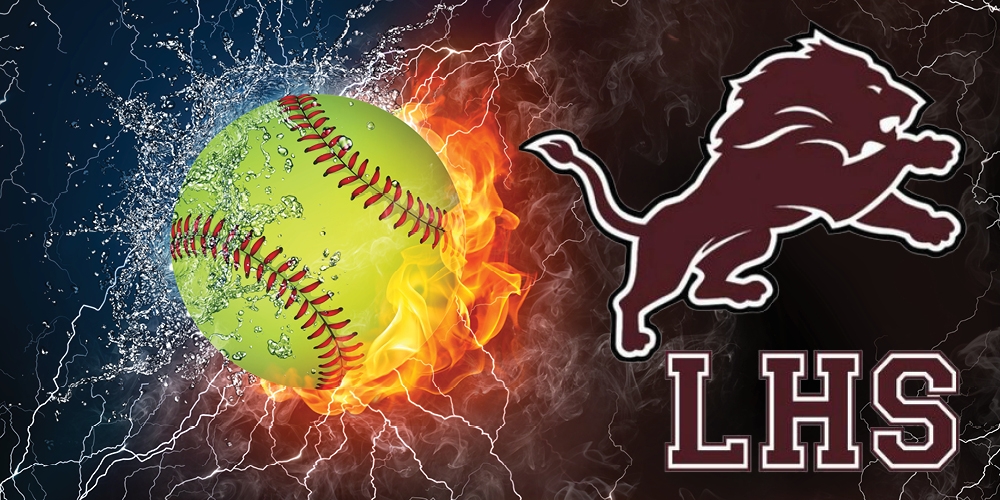 A quintet of softball players from Lovelady received all-state recognition from the Texas Sports Writers Association (TSWA) for their performances during the 2022 season.

Class 2A first team honorees for the state runner-up Lady Lions were senior Macie LaRue as pitcher, junior Haven Prager at first base and senior Mihyia Davis as outfielder.

Junior Scout Lovell was selected for the second team at shortstop and senior Linda Martinez received honorable mention as a utility player.

Lovelady's district rival Groveton was the only other area team with players receiving all-state honors. Shelby Arnold of the Lady Indians was selected as DP/DH/Flex on the first team. Second teamers were Lexi Easterling as outfielder and Megan Luce as DP/DH/Flex.

All-state selections were made by TSWA members based on nominations from coaches and media from around the state.

The 2022 Blue Bell/Texas Sports Writer Association All-State class 2A selections are as follows:

2A Coach of the Year: Kirk Allen, Crawford 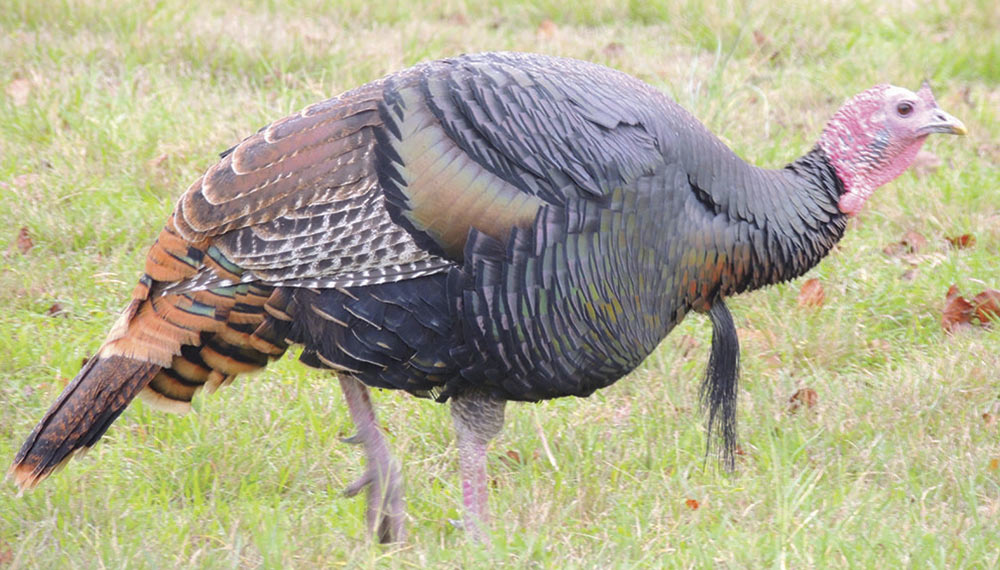 Turkey hunts are among the offerings available through the Texas Parks and Wildlife Department's drawn haunt permits program.

AUSTIN – New opportunities and scenery are available to hunters this fall through the Texas Parks and Wildlife Department’s (TPWD) drawn hunt permits program, now accepting applications for a shot at almost 10,000 permits in 62 hunt categories.

The permits allow drawn hunts on both public and private lands throughout Texas. Among the offerings available through the online system are hunts for white-tailed and mule deer, pronghorn, turkey, alligator, dove and guided packages for exotic species and bighorn sheep.

Applicants for e-Postcard hunts and U.S. Forest Service (USFS) Antlerless Deer Permits must have a current APH permit to apply.

An interactive map shows all drawn hunt opportunities by category or by area, and all applications, fee payments and permit issuance are handled electronically. To participate, applicants will need internet access, an email address and a credit or debit card. The customer ID number from the applicant’s hunting or fishing license is the most effective way to access the system.

Application fees are $3 or $10 depending on the hunt category. Adult hunters that are selected may also need to pay a Special Permit fee of $80 for regular hunts and $130 for extended hunts. Some categories, such as the Youth-Only hunts, require no application fees or permit fees. Permits are open to resident and non-resident hunters alike.

For more information or to get started in the application process visit the TPWD drawn hunts webpage. For questions, contact This email address is being protected from spambots. You need JavaScript enabled to view it. or call (512) 389-4505 between 8 a.m. and 5 p.m. Monday through Friday. 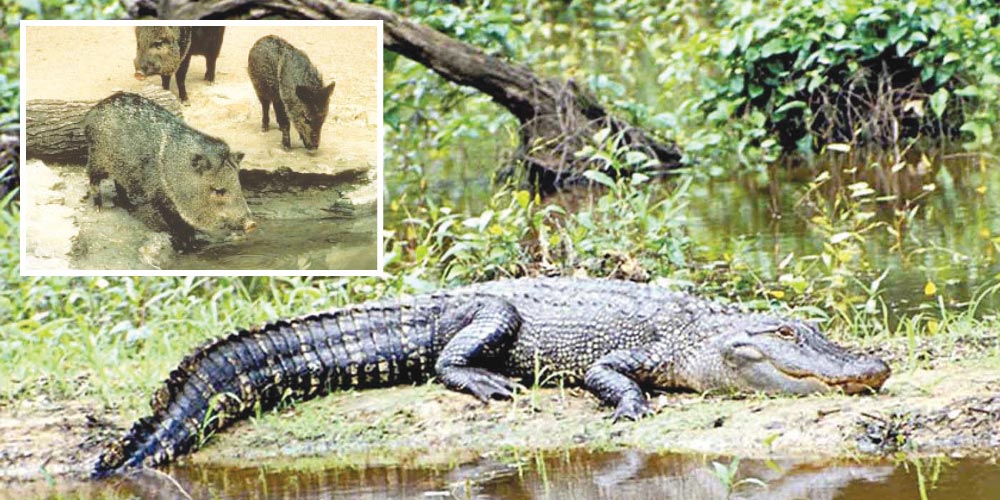 Alligator and javalina hunts are among the opportunities available through the Texas Parks and Wildlife Department's drawn hunts permits program.