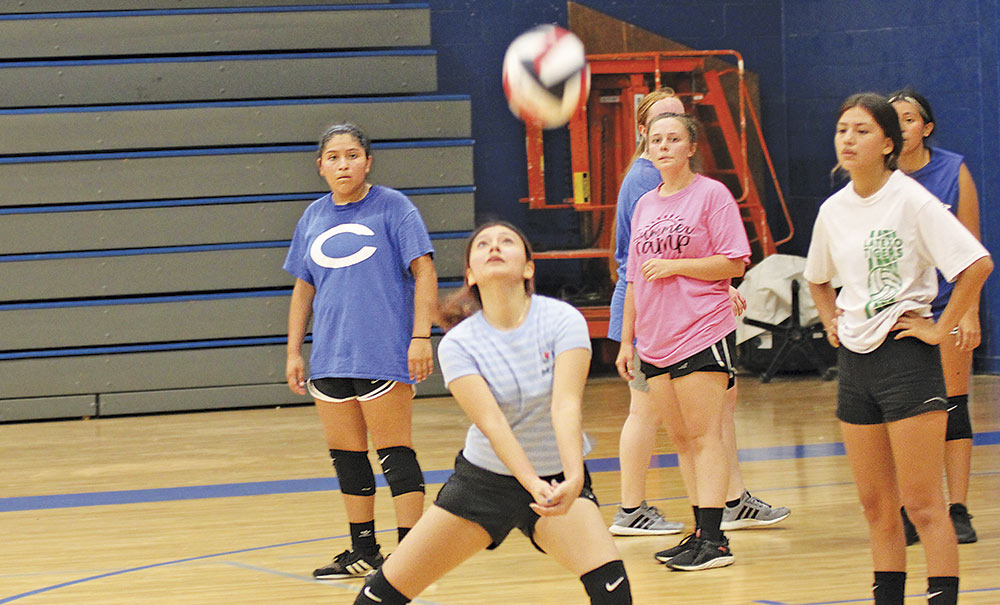 Houston County's five high school volleyball teams hit the practice court Monday and will get their first taste of competition during scrimmages this week.

On Friday, Lovelady will host a scrimmage with Latexo and Buffalo.

A total of nine matches will be played -- three varsity, three junior varsity and three freshman -- in two gyms. Each match will last 40 minutes.

Lovelady and Latexo varsities will start things off at 8 a.m.

Then the Lady Lions varsity will scrimmage Buffalo starting at 8:50 a.m.

Latexo and Buffalo round out the varsity segment of the scrimmage at 9:40 a.m.

Junior varsity scrimmages are as follows:

Freshman scrimmages slated in Gym 2 are:

On Saturday, Crockett is hosting a four-team scrimmage with Grapeland, Coldspring and Rusk. All matches will be in the Hopkins Dome.

Crockett and Grapeland will take the court first at 10 a.m., followed by Coldspring and Rusk at 10:40. After Crockett and Coldspring scrimmage at 11:30 a.m., Grapeland and Rusk will close out the varsity action at 12:10 p.m.

Three junior varsity scrimmages will round out the day.

Kennard's JV will face off with Hudson JV at 10 a.m., followed by the Kennard and Hudson varsities at 10:30 a.m.

Both Kennard squads will scrimmage Richards in their final action. The JV match is 2 p.m. and the varsity match follows at 2:30.

Next Tuesday, Kennard opens the season at home with Crockett. 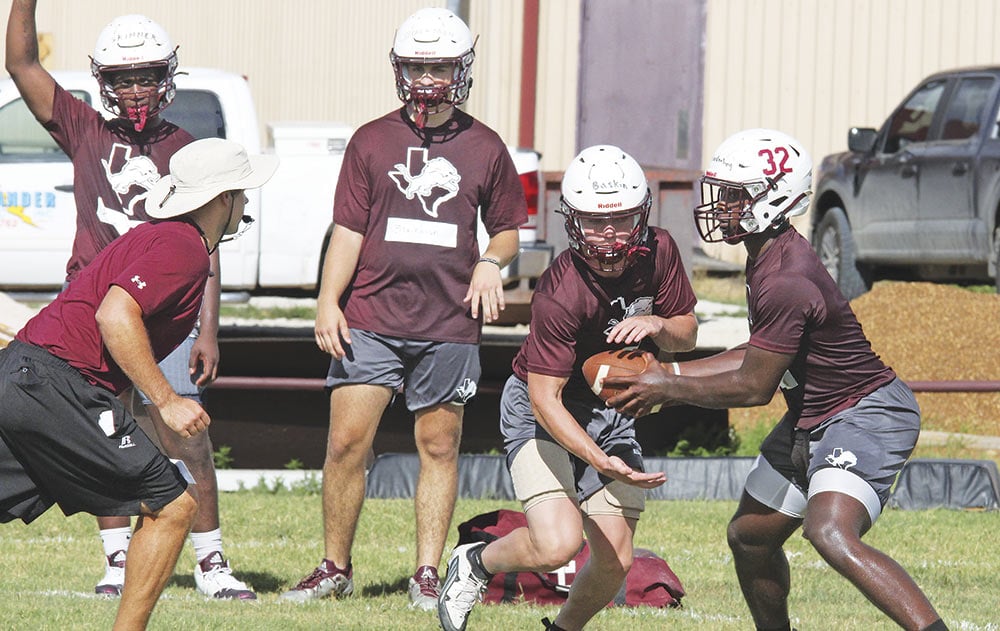 The countdown to the 2022 high school football season officially began Monday for Crockett, Lovelady and Grapeland with opening games just three weeks away.

Lovelady head coach Will Kirchhoff had good reason to smile when he welcomed 57 prospects, the biggest turnout of the three county schools.

"This is going to be a really good group. A very deep team," said Kirchhoff. "We're excited about this young group coming up as well as the older group that we've fostered over the last four years. We have a great group of juniors and seniors that'll be spearheading this bunch. We're excited about it."

Kirchhoff added, "We still have a couple of players out that are either sick or out of town and they should be back later this week."

An influx of 22 athletes from the junior high program boosted the Lions' numbers. "We lost 11 seniors and brought in 22 freshmen, plus we had several sophomores and juniors who decided to play this year and give it a run," said Kirchhoff. "Everybody wants to be a part of this. We're excited about the group we've got. From ninth grade up to twelfth is a really good group of kids."

Kirchhoff said the Lions' spring and summer conditioning program has paid off.

"We talked all year about starting where we finished. This group is definitely ahead of where we've been in the past. We had numerous kids who put in a lot of time this summer. We told them we have to just reset that bar and what it means to come into preseason in shape and continually getting better. Even though they came in in better shape, we're still going to push them to take that next jump so that where in the best shape we've ever been in by the time we get to our first game."

The Lions will report Saturday at 7:30 a.m. for a photo session followed by their first practice in full pads. "We'll get our pictures taken and then we'll come out and play a little football," Kirchhoff said.

Lovelady travels to Trinity on Thursday, Aug.11 for its first scrimmage.

"We'll have more once we get our sub-varsity players out here. We basically have all our varsity players here and we're just working on fundamental stuff and base schemes," said Dixon.

Practice is being held each evening at 5 p.m.

"With it being so hot, we're going through this acclimatization period taking precautions to make sure we have plenty of water during practice and ice afterward. We're trying to practice at a fast tempo while taking plenty of breaks," said Dixon.

Players lift in the weight room before practice two days a week. "We're trying to maintain and find a way to get stronger," said Dixon. "As we get into the school year our sub-varsity will probably lift three or four times a week and the varsity twice a week. But with our percentages set the way they are and with our post-game lifting we're going to be fine."
"

Conditioning-wise we're where we expected to be. For the most part we're a little bit ahead of the curve coming out of our summer strength and conditioning program. We've got some guys that are little behind, but we're going to condition every day," he added. "Right now we're probably about 65 to 75 percent being in shape as a team. We just have to get our bigs some reps because they're going to be playing both ways."

Fans can catch a sneak preview of the Bulldogs on Saturday during the Blue-White Intersquad Scrimmage starting at 10 a.m. in Driskell Stadium.

"It's our first day of real contact. Staying within the policies of UIL rules is highly important and we really want to take care of kids at this time too," Dixon said.

When classes begin next Wednesday, the Bulldogs will shift to their usual school routine.

"We'll use eighth period for film and weight room. We do a 24-period practice and work on offense, defense and kicking game all in that same structure," the coach explained.

Crockett's first scrimmage will be Thursday, Aug. 11 at Elysian Fields.

Thirty-seven players reported at Grapeland, where workouts are held from 8 a.m. until 11 a.m.

"It's been really smooth so far. We had a great offseason that has helped this year as far as a smooth transition," said head coach Jordan Wood. "We don't have a lot of numbers but the kids we have work really hard. They're not scared to work."

"After morning practice, we take about a 2 1/2 hour break, feed them lunch, meet and work out. It's not the traditional two-a-day," said Wood.

This Saturday is media day for the Sandies. Players will report at 8 a.m. to get suited up and photos will be taken around 8:30 a.m.

An intersquad scrimmage is scheduled afterward in Sandie Stadium.

"It'll be real structured and real controlled. We'll let them hit a little bit for the first time. It'll go for about an hour," said Wood.

Next Friday, the Sandies will host Cushing for a scrimmage. The Meet the Sandies program will take place while the junior varsity scrimmage is 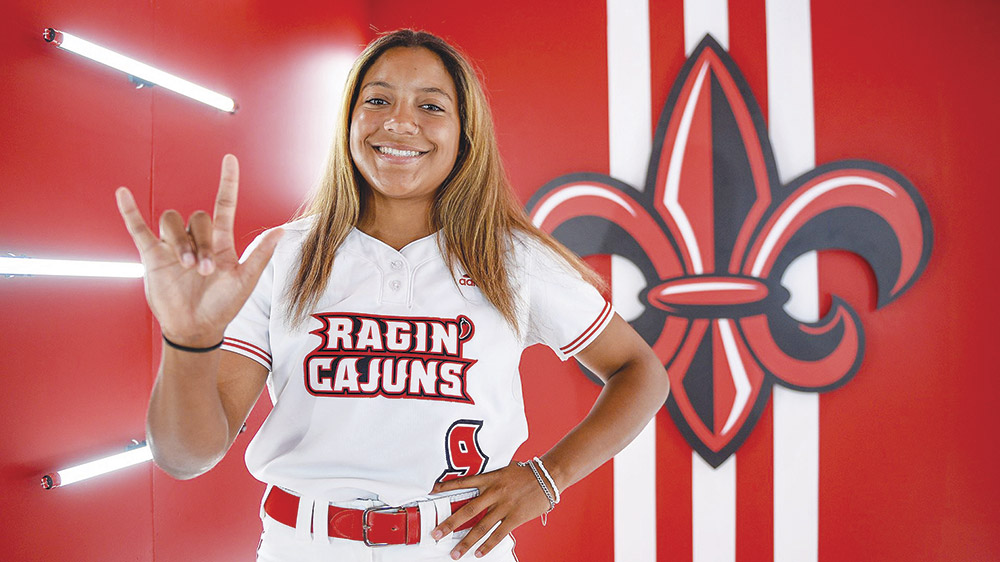 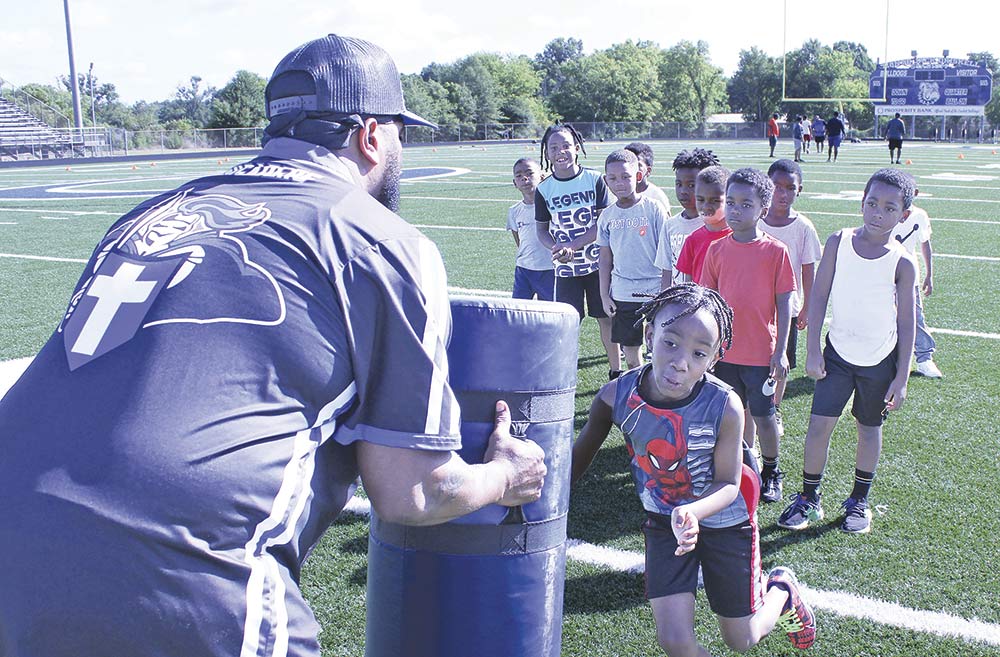 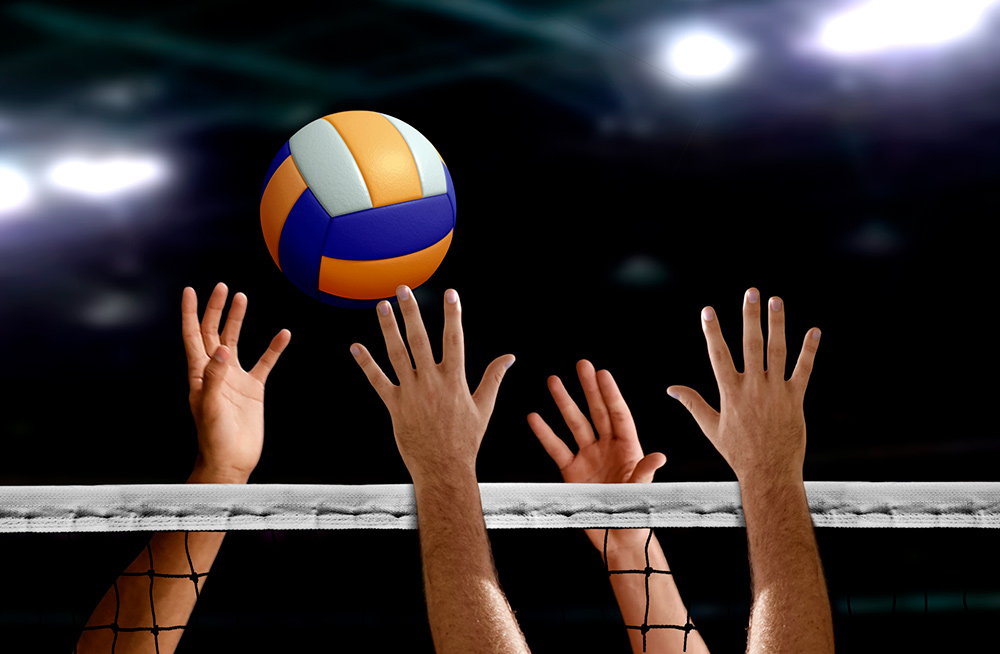 Registration is $50 and is being conducted online. Contact coach Greg Horn for a registration link at This email address is being protected from spambots. You need JavaScript enabled to view it..