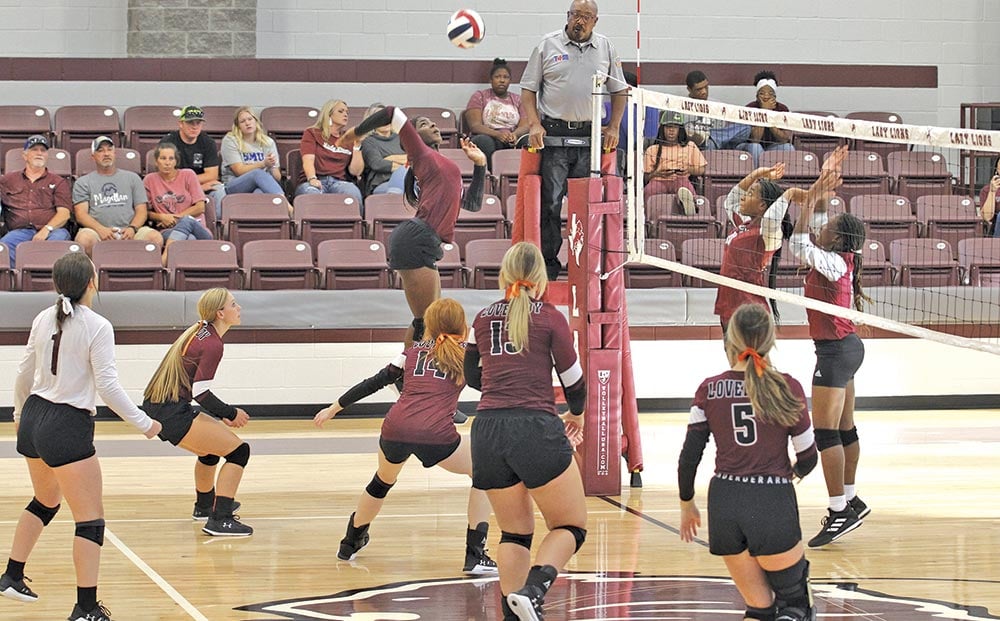 LOVELADY — The Lovelady Lady Lions volleyball team served up a three-set victory playing in the school's new gymnasium for the first time on Tuesday, Sept. 20.

Senior Haven Prager's serve was the first by a Lady Lion in the new facility.

Lovelady dominated the district last year, clinching the championship with a perfect 13-0 record with three-set sweeps in every match.

Groveton was district runnerup, Latexo was third and Colmesneil was fourth. The district also included four 1A schools, but the UIL created separate districts for the smaller schools this time around.

Corrigan-Camden and Grapeland round out the district this year. Corrigan dropped from class 3A, where is was a district runner-up and Grapeland moved from another 2A district.

Fans have two opportunities to see the Lady Lions in action at home this week against Corrigan on Tuesday and Grovetonon Friday.

Four honorees will be inducted into the Crockett Ring of Honor during a ceremony Friday at 5 p.m. in the high school commons. The 2022 inductees are Monte Jack Driskell, Fernando Harris, Paul Richmond and Charissa Scott. 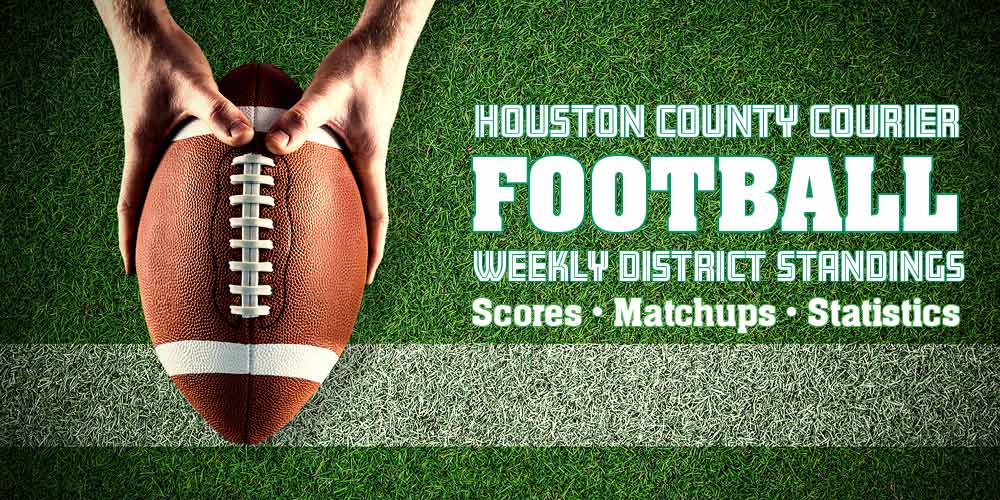 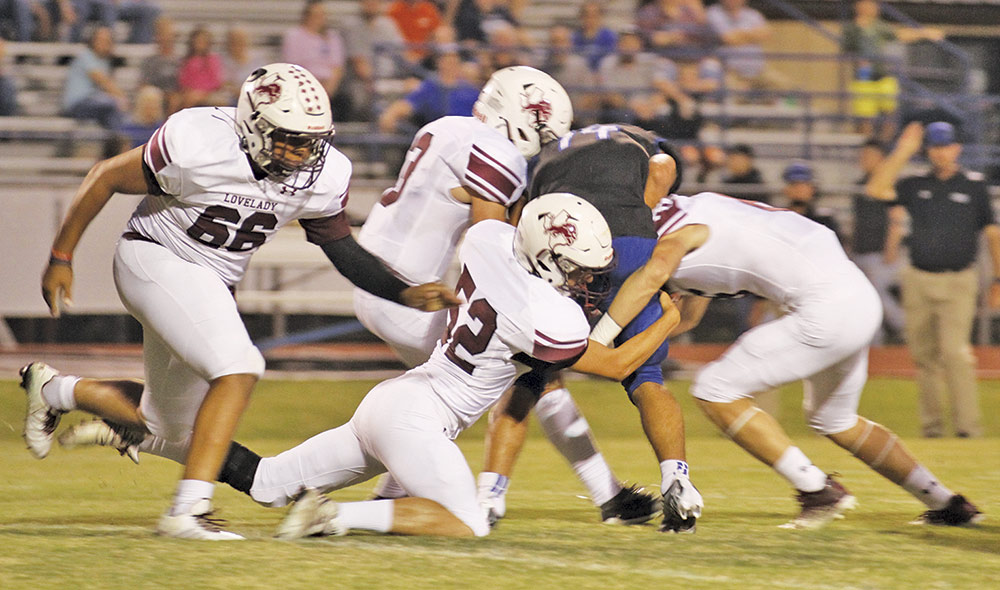 JEWETT – The Lovelady Lions wrapped up their non-district schedule with a 50-7 win over Leon Friday night.

Dayvian Skinner booted a deep opening kick and Alan Baskin immediately hit the return man at the 20. Leon was forced to punt and a highkick went out of bounds at the Leon 34.

After a 10-yard penalty, quarterback Shaun Easterling rolled out and hit Brandon Fry on a pass to the 19. Easterling capped the drive on a 19-yard run with 9:13 left. The two-point conversion failed, leaving the Lions with a 6-0 lead.

Taking over at their own 28 after a punt, the Lions put together an 8-play, 72-yard scoring drive. Runs by Easterling and Jordan Blackmon moved the ball across midfield. On the first play of the second quarter, Blake Patrick took a handoff and was hit as he went through the line. Bouncing off defenders, Patrick kept his feet moving for 44 yards before being forced out of bounds at the Leon 5. Easterling then hit Jayton Crawford on a 5-yard TD toss and Skinner ran up the middle for the conversion to put the Lions up 14-0 at the 11:22 mark.

Leon scored after returning the kickoff to its 30 before Landen LeBlanc made the stop. The Cougars completed a quick pass over the top and the receiver reached the Lion 2 before Skylar Pipkin ran him down. After LeBlanc shut down the next play, the Cougars scored on a 3-yard pass and kicked the extra point to make it 14-7 with 10:11 left in the half.

Lovelady dominated the rest of the game and opened up a 28-7 halftime lead.

After Leon's kickoff, the Lions drove 58 yards on six plays and scored on a 29-yard pass to Oscar Sutton. Blackmon ran the conversion for a 22-7 lead with 7:19 on the clock.

Taking over at their own 34 on another punt, the Lions drove the field on the running of Blackmon, Easterling, Whitaker and Skinner. Easterling threw to Fry for 24-yards to the 2 yard line and then capped the drive on the next play with :30 left in the half. The conversion failed.

The Lions struck for three touchdowns in the third quarter before the scoreless final period.

After Pipkin fielded the second-half kickoff at the Lion 42, Blackmon reeled off a 28-yarder as he strong-armed defenders along the way.

Blackmon carried three more times, Skinner had three carries and Easterling had four carries, including a 2 -yard TD run. Blackmon ran the conversion, putting the Lions in control 36-7 at 7:01 mark.

Lovelady's next scoring drive covered 61 yards on three plays. After Cortavies Whitaker carried twice for 14 and 11 yards, Skinner finished it off with a strong run from the Cougar 36. Skinner ran the conversion and the Lions went up 43-7 with 3:28 in the third.

The Lions cashed in a Leon fumble after Patrick scooped up a loose ball around the 40 and returned it to the Cougar 21. Whitaker carried for six, Baskin followed with a five-yarder and Whitaker scored from 10 yards out. Skinner tacked on the final point to make it 50-7 with 1:33 left in the third.

Troy Shupak kept pressure on the quarterback all night and set the Cougars for a loss more than once. 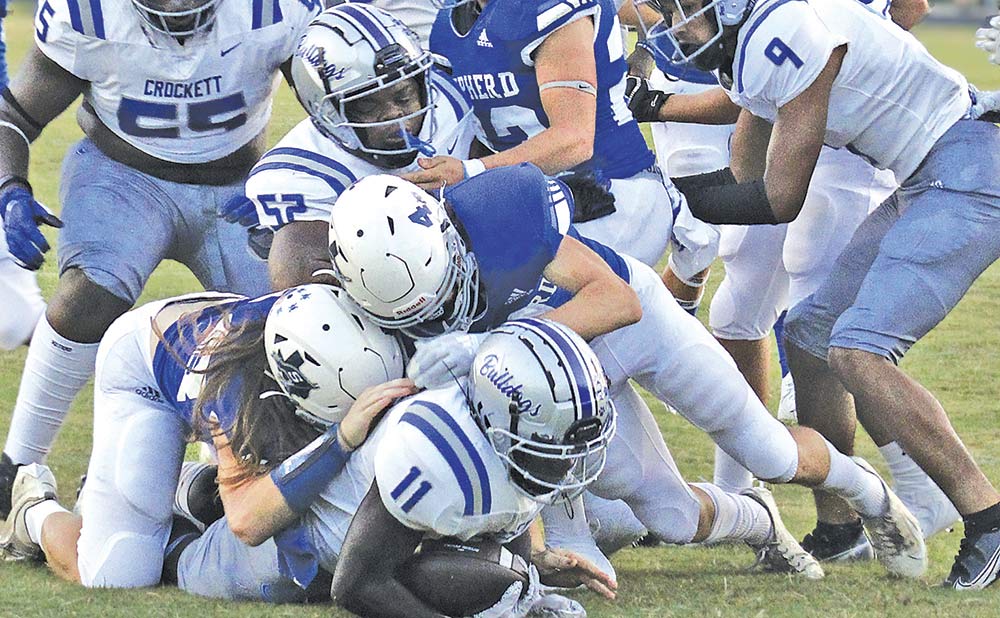 Crockett's Tywoin Delane (11) is brought down at the 1-yard line by Shepherd early in the District 9-3A DI opener last Friday. Quarterback Jadyn Collins scored on the next play and the Bulldogs went on to grab a 20-0 lead before ultimately falling 32-26. Photo by Larry Lamb

SHEPHERD– The Shepherd Pirates stormed back from a 20-point deficit to overcome Crockett 32-26 in the District 9-3A DI football opener Friday night.

After Crockett struck for three unanswered touchdowns, the Pirates got on the scoreboard late in the half to make it 20-8. Shepherd closed the gap to 20-16 in the third and tacked on two touchdowns early in the fourth to go up 32-20. Crockett got back in the game with a score at 4:31 mark but Shepherd maintained possession the rest of the game.

Head coach Alton Dixon cited miscues in the kicking department as a key factor in the loss.

"The most glaring thing was our kicking game. We didn't protect very well on our punts and our PAT. Those two things were factors that changed the game for us. We had a great opportunity in front of us," said Dixon.

Kicking game glitches hampered the Bulldogs throughout the contest but a high snap on Shepherd's first punt put Crockett at the Pirate 1 yard line. Quarterback Jadyn Collins scored on a 1-yard blast and the PAT was blocked, leaving Crockett with a 6-0 lead at the 9:16 mark.

The Bulldogs scored again after a Shepherd punt to the 36. Collins rambled for 14 and Corey Simon escaped for 37 to the Pirate 3. Collins sneaked into the end zone on the next play and Zandric Anderson ran the two-point conversion for a 14-0 lead at 2:16.

After forcing another Pirate punt, the Bulldogs put together an 86-yard scoring drive. Devin Bedford had a 12-yard catch and Simon picked up 24 to set up a 44-yard TD strike from Collins to Bedford. The PAT was blocked and Crockett led 20-0 with 9:12 left in the half.

Shepherd got on the scoreboard with a 58-yard scoring drive that consumed almost seven minutes of the second quarter. Running back Preston Stephens capped the 13-play drive on a 4-yard run and then carried the conversion to close the gap to 20-8 with 2:21 on the clock.

With the Pirates threatening at the Bulldog 18, Crockett’s Bryson Burton knocked away a fourth-down pass to preserve a 12-point halftime lead.

After halftime, another Crockett punting situation went awry and the Pirates took possession at the 4-yard line. Quarterback H.D. Green scored and Stephens ran the conversion to trim Crockett's lead to 20-16 with 9:47 in the third.

"Coming out in the second half and not getting a first down was a really big deal because at that point we were up 20-8. We have to punt, Shepherd blocks it and gets the easy score. Shepherd's offense is built not to come back, but a 12-point lead isn't enough," said Dixon.

A time-consuming 88-yard drive put Shepherd in front 24-20. Taking over after a punt with 5:50 in the third, the Pirates chewed up the rest of the quarter and opened the fourth with a 14-yard touchdown run by Stephens. Backup quarterback Ryan Harrison carried the conversion for a four-point lead with 11:53 to go. Harrison called signals for several plays after Green was shaken up earlier in the series.

Another bad punt snap set up Shepherd at the Crockett 25. At this point, Crockett was flagged for unsportsmanlike conduct on the bench and coach Dixon was ejected with just over 10 minutes left.

Shepherd started at the Crockett 18 after the penalty and Green scored on a 1-yard plunge with 7:38 left. Stephens gave the Pirates a 32-20 cushion.

Commenting on his ejection, Dixon said, "It was an accumulation of things throughout the night. One was the number of time-outs given. In the first half they had four stoppages of play. Shepherd called a time-out as they were going in to score in the second quarter and I had them with four time-outs. I called the white-hat over and he checked what he had written down. He said this is wrong, one of these was my time-out. If that was the case, I wasn't able to talk to my kids when they were. That's why I believe it was a called time-out for Shepherd.

"Also, the referee on my side didn't have an earpiece, a hat and/or a whistle. I had to send a coach to his vehicle to get his whistle," he added.

Dixon said the back-breaker occurred early in the fourth after the botched punt that gave Shepherd the ball at the 25.

"There was a situation where a statement was made to me by an official and I lost it because I felt our kids weren't being given a fair opportunity in the game. I apologize to my community because I have to be above board. I have to do a better job of keeping my cool because I talk to my kids about it all the time. But I will always stand up and defend my kids. Just give us a fair shake. There's a lot of man hours and a lot of time spent by players, coaches and staff to win a football game," the coach said.

He continued, "That's not like me to react that way and I've never been that way, but I do apologize to our community and our kids because I felt like that had a big impact on the game," he continued. "I regret this happened. I was just really frustrated because we know how important district football games are. It just came down to my feeling like our kids weren't being given a fair shake."

The Bulldogs got back in the game with a 75-yard scoring drive that included four passes. Collins connected with Jonathan Lockhart for 16, Anderson for 29 and Bedford for 24 on a diving catch. Collins hit Bedford again on a 12-yarder for the touchdown to make it 32-26 with 4:31 left but Shepherd's Gage Murphy shut down the two-point play.

After an onside attempt by Crockett, Shepherd took over at its 46 yard line and reached the 16 while eating up the clock with the run game.

Crockett’s offense rolled up 324 total yards. The Bulldogs rushed for 180 yards and Collins completed 7 of 11 passes for 144 yards.
Shepherd finished with 286 rushing yards and was 0 of 5 passing.

Offensive standouts cited by Dixon were Collins and Simon while Courtney Byrd and Bryson Burton were named defensive standouts.
"Those four guys played pretty well and gave us a chance to win the game. Corey went out during the game and it changed how we did some things offensively and defensively," said Dixon. "Our kids played with great effort and then some things happened that we weren't good about getting addressed right away. It's tough, but my hat's off to coach Robison, his staff and their ball club. They did a great job and they won the game. "