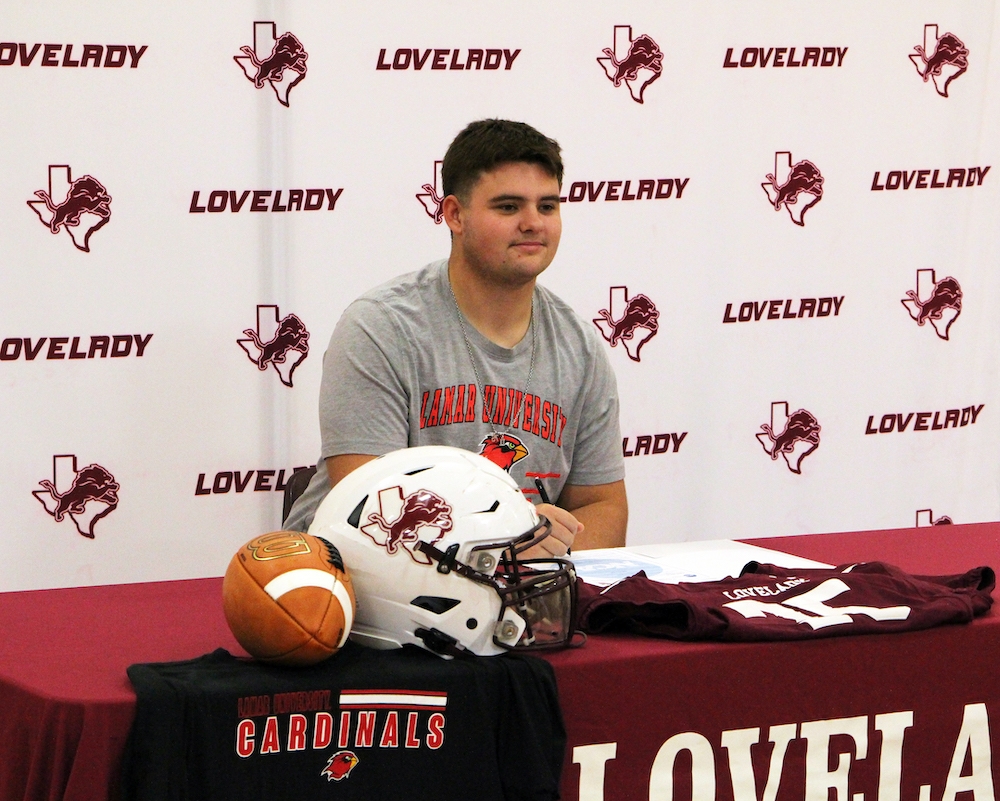 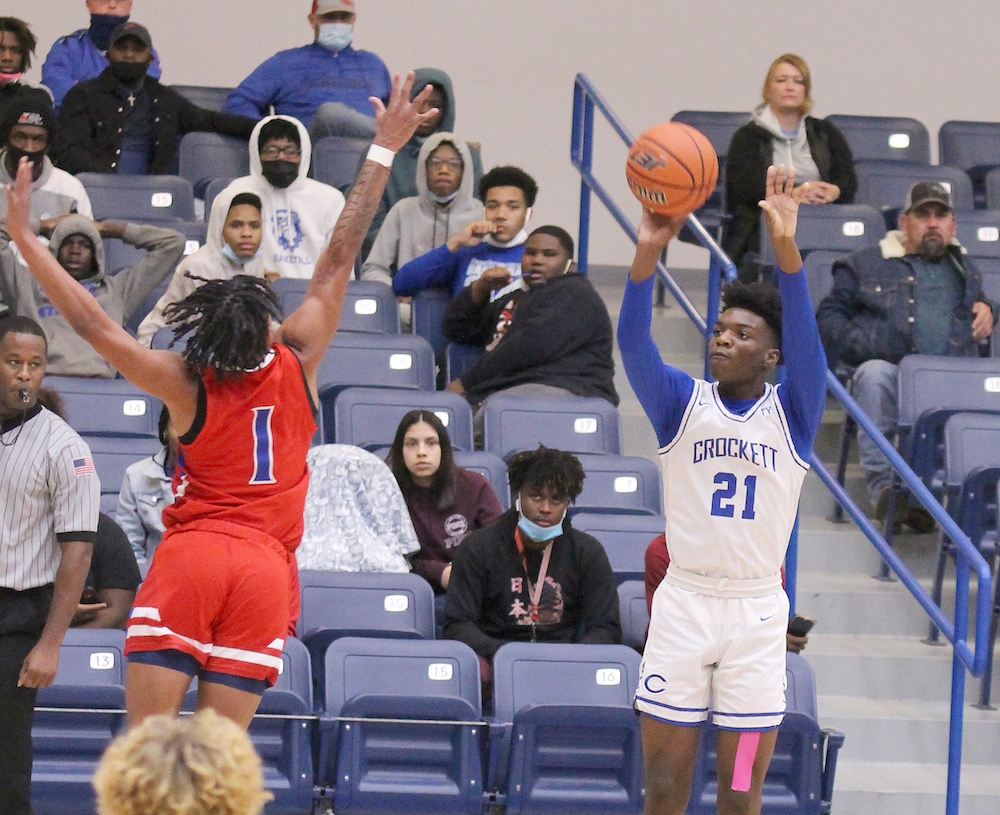 LARRY LAMB | HCC Crockett’s Delvin Walker launches one of his seven three-pointers against Elkhart in the district opener.

You’d never know the Crockett Bulldogs had only played two games before their district opener.

The Bulldogs swooshed in 12 three-point shots as they raced past Elkhart 86-39 Tuesday, Dec. 15 at The Hop in Crockett.

“This was only our third game with probably just 15 practices,” said Bulldog head coach Jordan Caldwell, noting that Elkhart had played eight games and came in with a 4-4 record.

The Bulldogs jumped out to a 25-10 first quarter lead and increased it to 50-29 by halftime. Outscoring the Elks 18-9 in the last two quarters, Crockett carried a 68-28 lead into the final period.

The Bulldogs put on a three-point shooting clinic behind junior Delvin Walker, who buried seven from behind the arc. Jadyn Collins drained two while Tayshawn Simon, Ty White and Ja’Lyne Carruthers each nailed a trey for a team total of 12.

Walker finished with 25 points to pace the Bulldogs. White tossed in 13 points, all in the first half, while Keshun Easterling and Jadyn Collins booked 11 and 10 points, respectively.

Elkhart sophomore Cale Starr pumped in five treys and accounted for 28 of the Elks’ 39 points.

“I’m very satisfied with the way we played tonight. As a unit everybody did good. Elkhart played a heck of a game,” Caldwell continued.

He said individual standouts were Delvin Walker with his seven three-pointers, point guard Ty White and guard Tayshawn Simon. “Delvin’s only a junior so his future playing basketball is very bright,” added Caldwell.

Caldwell noted the Bulldogs only practiced once before their 56-36 season opener loss New Waverly.

“Hats off to New Waverly. They’re a great team,” said Caldwell, noting that New Waverly has earned a spot in the state polls. New Waverly (9-1) was ranked No. 14 in the TABC poll issued Dec. 21. Crockett was ranked No. 7 in early polls but has since dropped out.

“We’re still learning. We’re obviously young but we have a lot of players who came back. I think we definitely have the potential to go far,” said Caldwell.

Before resuming district play Jan. 5 at Buffalo, Crockett will travel to Pollok Central Dec. 29 and host a varsity home game Dec. 31 at noon against the East Texas Archers, a team comprised of homeschool students in the Lovelady area. 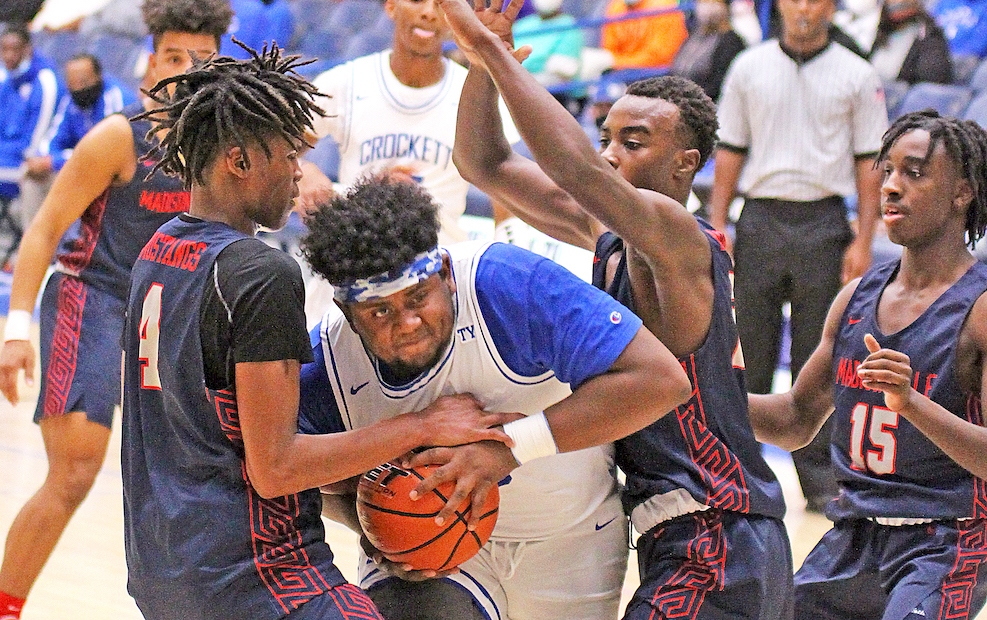 LARRY LAMB | HCC Madisonville’s Casey Holliday (4) tries to wrestle the ball away from Crockett’s Chris Purvis-Torres during a non-district game Tuesday, Dec. 8 at The Hop. The Bulldogs won 48-44 to even their record at 1-1.

The Bulldogs fended off the class 4A Mustangs in the closing minutes to win their home opener 48-44 Tuesday, Dec. 8 at The Hop.

Madisonville had an early 9-7 lead but never led again as Crockett went ahead 15-11 at the end of the first quarter.

The Mustangs got within a point several times over the next three quarters, but Crockett led 24-19 at the break and 35-31 at the end of three.

After Madisonville opened the fourth with a bucket to make it a two-point game, Delvin Walker heaved in a three-pointer and Jadyn Collins canned a bucket to put Crockett up 40-33 with 6:27 left.

Back-to-back buckets by Madisonville made it a three-point game before Tayshawn Simon swooshed in a trey to give the Bulldogs some breathing room with a 45-39 lead at the 3:30 mark.

The Mustangs refused to go away quietly, scoring two straight buckets and a free throw to get within a point, 45-44, with 2:41 left.

After several scoreless possessions by both teams, Walker went back to the hole with :30 left to give Crockett a three-point cushion. Simon went to the line with :18 left and hit the front end of a one-and-one for a 48-44 lead.

Madisonville missed the front end of a one-and-one with :13 left but got the rebound and put up an errant shot that was knocked out of bounds. The Bulldogs inbounded with :11 left and ran out the clock.

Madisonville’s Casey Holliday was the only double-digit scorer for either team with 16.

This was only the second game for the Bulldogs while the Mustangs had already played six games.

After starting their district schedule against Elkhart and Groesbeck before the holiday break, the Bulldogs will sandwich in a pair of non-district games with Pollok Central on the road Tuesday, Dec. 29 and East Texas Archers of Lovelady at home on Dec. 31. The Archers team is comprised of home school athletes in the area.

Crockett gets back to district action Jan. 5 at Buffalo. 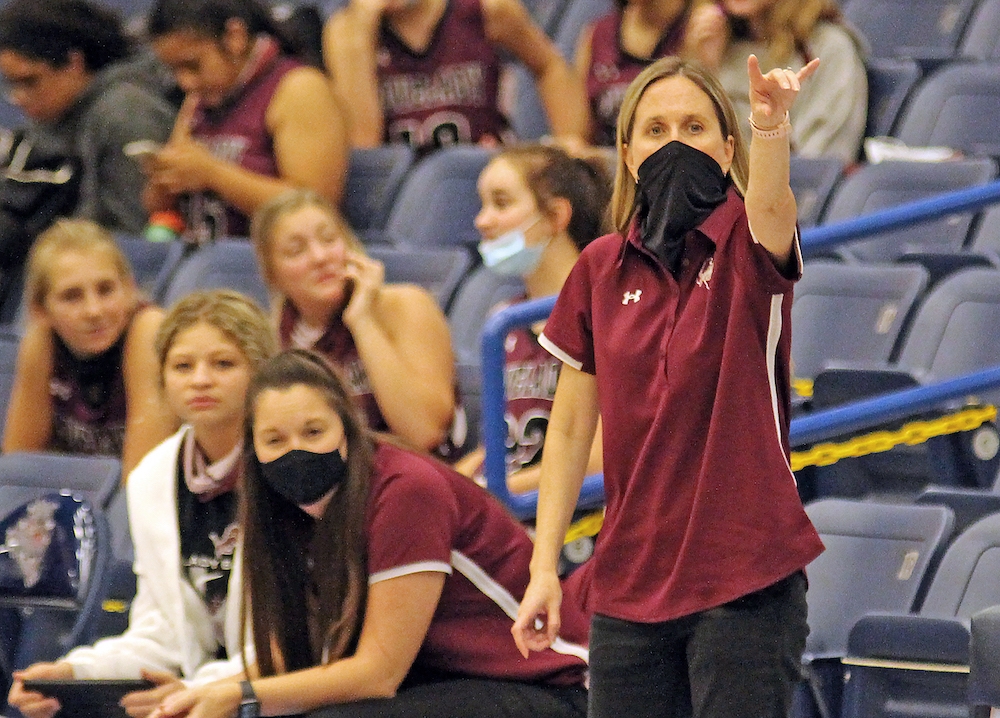 Lovelady’s girls basketball season got off to a winning start under new head coach Kollyn McWhinney against county rival Crockett, 58-27, on the road Tuesday, Nov. 10.

Macie LaRue had the hot hand in the middle quarters when she scored 13 of her 17 points (1 trey) to pace Lovelady’s offense.

Crockett’s scoring was led by Quenisha Henderson with 10 (1 trey). Tocarra Johnson had 7, Ty’Shonda Bell 4 and La’Kyriah Hamilton drained a 3-pointer. Keaton Crabtree, A’Naya Wooten and Ja’Kenya Tryon each had a free throw.

Before coming to Lovelady, McWhinney was head coach at Class 3A Marion High School for 16 seasons. She passed the 300-win milestone during the 2016-17 season and finished the 2019-2020 season with a total of 363 victories. 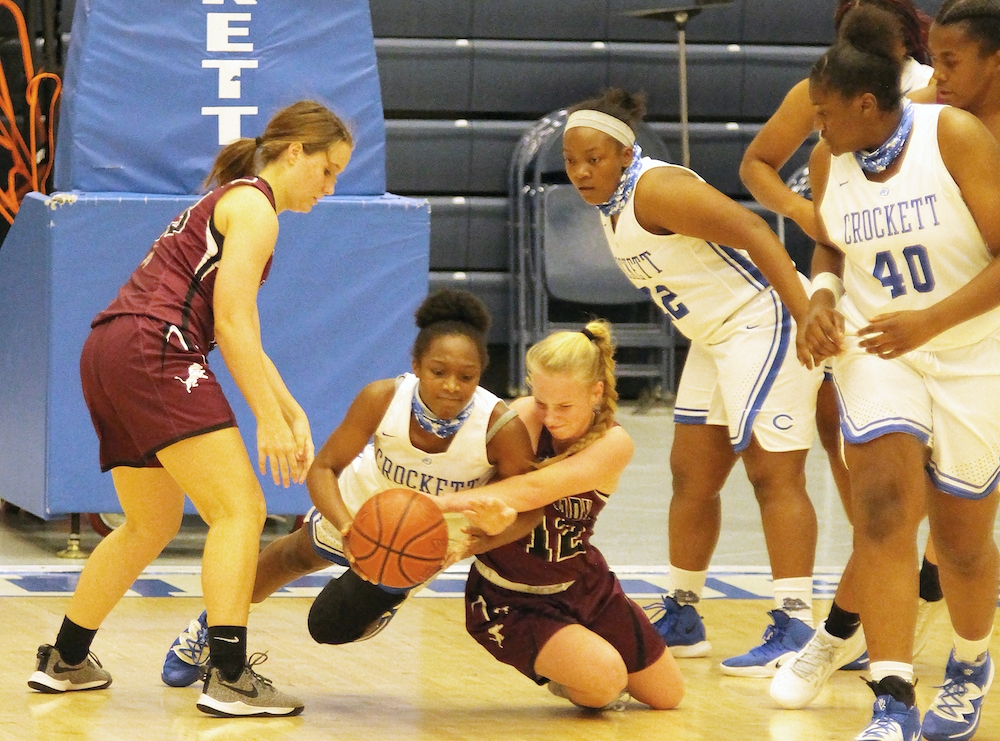 After finishing third in the district last season, the Lady Lions beat Cayuga in bi-district and then knocked off a highly ranked Marlin squad before being eliminated by Crawford in the third round.

Lovelady opens district play Dec. 11 on the road against Groveton.

The Lady Bulldogs are playing catch-up after missing the first two weeks of practice due to Covid-19 quarantine.

Crockett begins its District 20-3A schedule Dec. 8 at home against Teague. 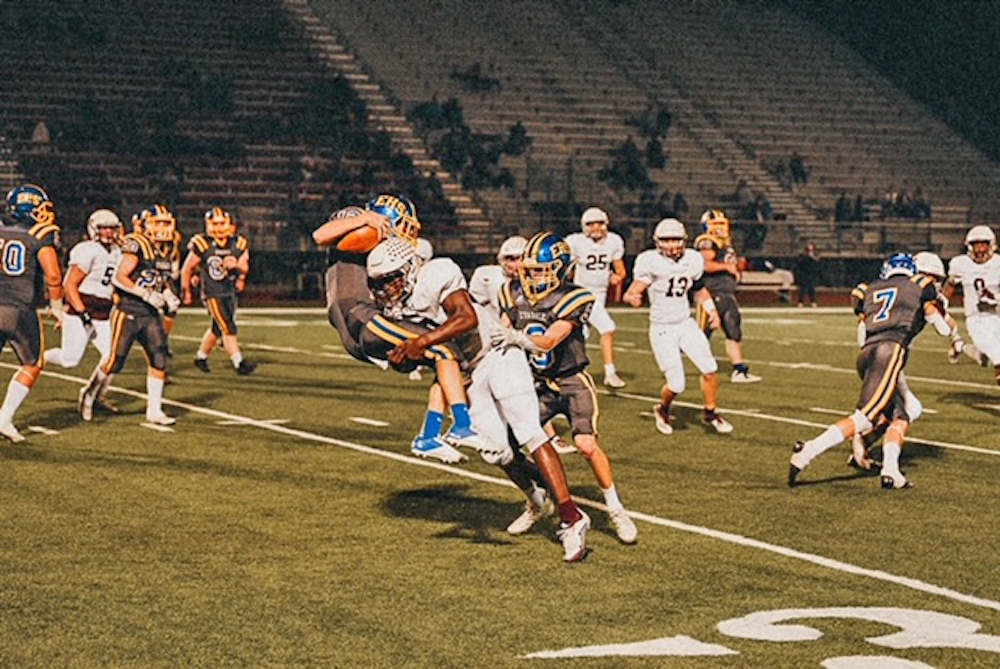 The Lions won’t have much time to relish their victory, however, as they must begin preparing for a showdown with undefeated and top-ranked Mart in the area round Friday, Nov. 20 at Caldwell High School’s Hornet Field. Kickoff is 7 p.m. Mart recorded a Covid-19 forfeit over Cumby in the first round.

Lovelady will carry a six-game win streak into the second round matchup.

The Lions led just 8-0 after a quarter but a three-touchdown flurry in the second quarter opened up a 30-6 halftime lead.

Lovelady scored with 5:13 left in the opening period on a seven-yard run by Keivon Skinner and two-point conversion run by Conner Martinez.

At the 8:35 mark in the second quarter Shaun Easterling took it seven yards for a touchdown run but a two-conversion failed.

Quarterback Slade Murray faked a handoff, rolled outside and took it to the house 60 yards with 6:41 in the second quarter. Easterling ran the conversion for a 22-0 lead.

The Lions went up 30-0 when Murray connected with Caleb Gilchrist on a 66-yard TD pass and Eric Anderson carried for the conversion with 2:29 to go in the half.

Evadale got on the scoreboard just before halftime on a pass from quarterback Chase Smith to Tom Boles.

Early in the third quarter Skinner reeled off a 40-yard scamper to set up a 16-yard TD run by Easterling. A conversion pass was intercepted in the end zone, holding the Lions’ lead at 36-6 at the 10:16 mark.

Lovelady went up 44-6 with :29 left in the third on a 19-yard run by Easterling and a conversion run by Eric Anderson.

In the fourth quarter the Lions increased their lead on a four-yard run by freshman Jordan Blackmon.

Evadale put together a 68-yard scoring drive late in the game.

Lovelady was in the same district with Evadale for two years before moving to its current district. The Lions won both matchups 46-18 in 2019 and 40-6 in 2018.