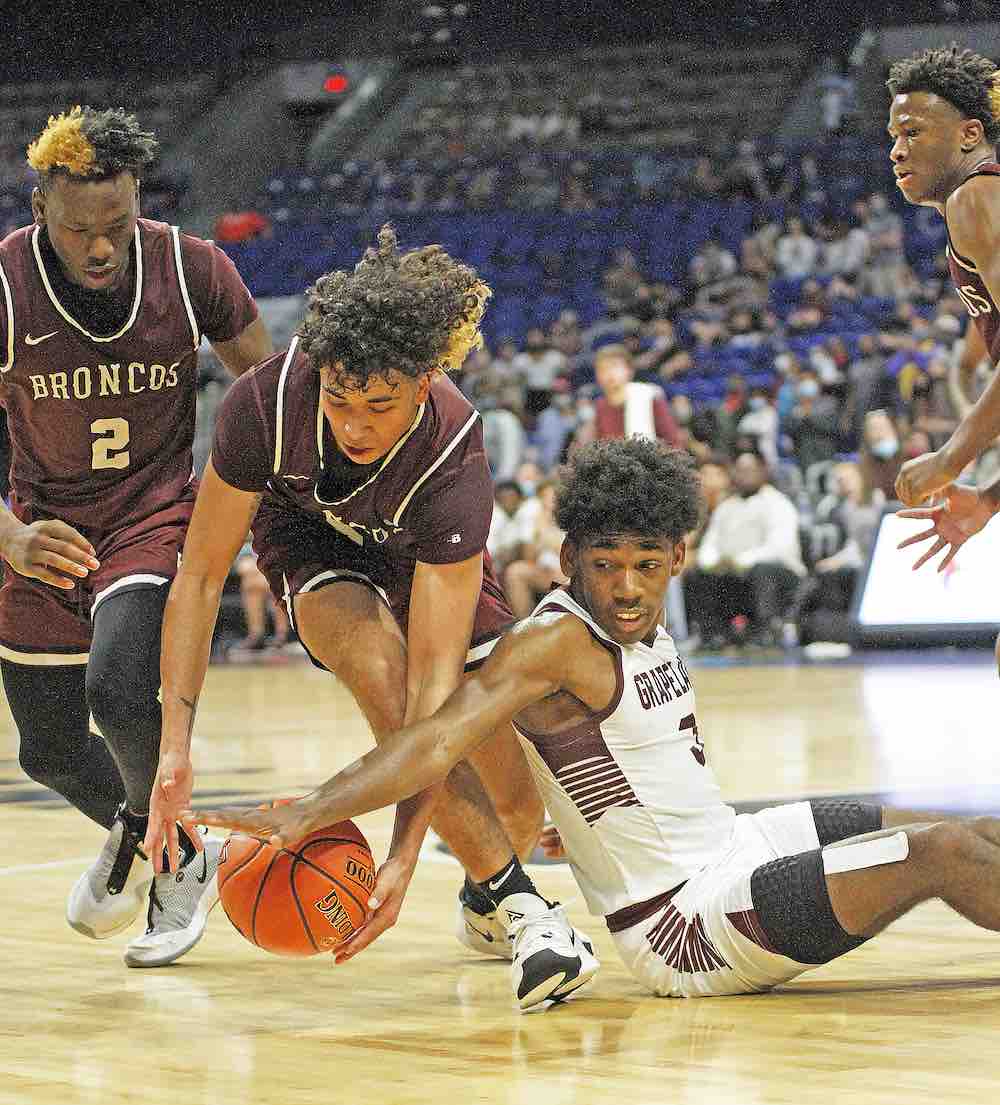 COURTESY OF MARSHA COOK Grapeland’s Caderian Wiley battles for a loose ball against Clarendon in the UIL Class 2A Boys Basketball State Championship game Saturday in San Antonio. The Sandies battled to the bitter end but came up short 64-60.

The Sandies lost a hard-fought battle with the Clarendon Broncos, 64-60, in the championship game at the Alamodome.

Despite falling behind by eight late in the game, the Sandies refused to throw in the towel.

The Broncos scored their final bucket with :04 after a turnover by the Sandies.

Grapeland trailed 18-12 after a quarter but Clarendon opened up an eight-point lead early in the second.

“We hadn’t shot the ball particularly well. We did some things that were uncharacteristic of us and we were still right in the game. We talked to the guys at halftime about staying the course, continuing to work hard and continuing to play hard all the way through,” said Grapeland head coach Blake Doughty during a Zoom post-game press conference.

An energized Grapeland crew started the second half with a 6-1 run to slip in front 32-31 at the 6:32 mark in the third.

Three straight buckets by Keizion Ashford, Lamb and Omarian Wiley gave the Sandies a 44-41 lead -- their biggest since early in the first half -- with :36 left in the third.

With :01 left in the third, Clarendon’s Donovan Thompson heaved up a three-pointer -- the only one by either team -- to put the Broncos up 47-46 heading into the fourth.

Senior State All-Tourney honorees Lamb and Ashford led the Sandies’ scoring with 19 apiece. Lamb was 7 of 8 at the line.

Wiley rounded out double figures with 13. Omarian Wiley had five while Riley Murchison and Michael Dancer chipped in two apiece.

Clarendon’s Donovan, who led all scorers with 21, was named Championship Game MVP.

“Obviously we’re disappointed. Everybody that gets to this point and doesn’t reach the top of the mountain is disappointed. But I’m so proud of these guys and the humans that they are. I’m so proud of the people that they are going to become as they move on from Grapeland High School. That’s really the important part of this and it’s hard to keep that in perspective all the time when you’re talking about the state final game. These guys mean the world to me. They’re great, great kids,” said Doughty.

This was Grapeland’s sixth appearance in the “Big Dance” since the 1985 Sandies captured the state crown. Grapeland made subsequent trips to state in 1999, 2001, 2014 and 2017 but was unable to crash through the semi-final barrier until this year.

Praising his team’s resiliency, Doughty added, “These guys never quit. They never gave in. They never turned on each other and that part’s great. We got to the point at the end of the game and both of our senior guards (Lamb and Ashford) had fouled out. That part can make it difficult to close out and finish games,” said Doughty, whose team ended the year with a 29-2 record.

The Sandies rained a barrage of 11 treys in their semifinal victory over Schulenburg but went 0-of-8 from beyond the arc against Clarendon. They left 15 points at the charity stripe, hitting just 14 of 29.

Doughty continued, “They’re good defensively and they’re active, but I think that’s got more to do with us than it does them.”

with us than it does them.”

“It’s been a good season because of the great teammates I have. It’s been an amazing season. We just came up short,” said Ashford.

An emotional Wiley said, “I’m going to take this loss and we’re going to be back next year.”