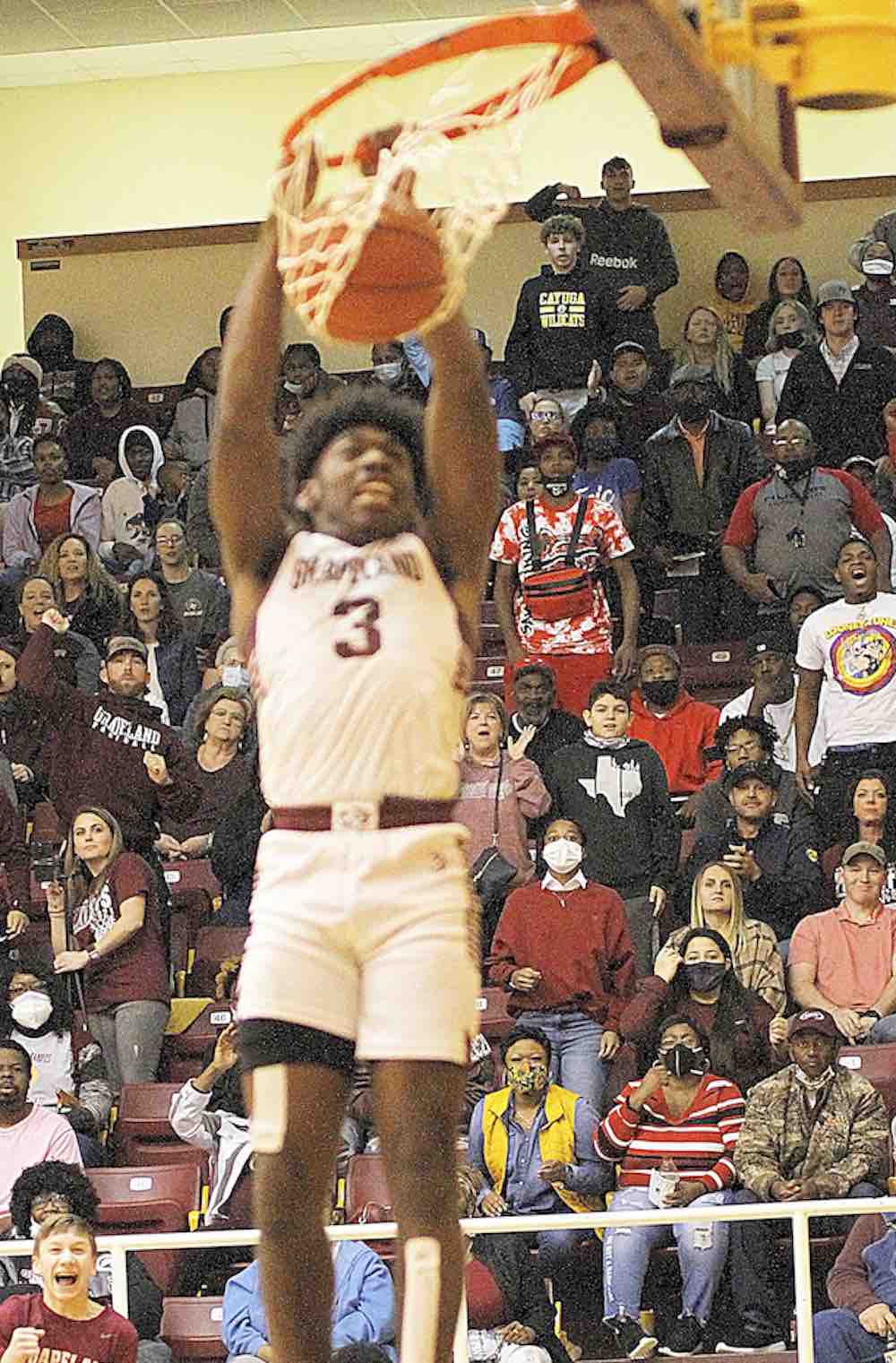 COURTESY PHOTO | MARSHA COOK Grapeland’s Cadarian Wiley brings fans to their feet with a slam-dunk in the regional championship game against LaPoynor Saturday.

Revenge is always satisfying but a win that moves you a step closer to a state basketball championship is even sweeter.

LaPoynor put the only blemish on the Sandies’ resume back on Dec. 12 when the Flyers notched a 61-56 non-district road win.

Grapeland advances to the state semifinals against Schulenburg Tuesday at Aldine ISD’s Campbell Center. Schulenburg, ranked No. 20 in the final TABC poll, knocked off No. 7 Port Aransas 57-50 in the regional final.

The winner of the Grapeland-Schulenburg game advances to the championship game at the Alamodome in San Antonio Saturday at 10 a.m.

No. 2 Clarendon and No. 8 Lipan will face off for the other state tournament berth.

LaPoynor led 12-10 after a quarter but didn’t have an answer for a barrage of seven 3-pointers by Grapeland that fueled a 32-11 run in the second quarter.

By halftime the Sandies were firmly in control 42-23 behind B.J. Lamb’s four treys and a pair of deuces in the second quarter. Riley Murchison drained a pair of treys and Johnny Lamb swooshed in another from 3-point range at the buzzer for a 19-point advantage.

The Flyers came out energized in the third quarter and reeled off an 11-2 run to whittle the lead down to 44-34.

Momentum shifted back to the Sandies when Ashford buried a trey and an electrifying two-handed dunk by Cadarian Wiley pushed their lead to 49-34 with 3:00 left in the third.

After Murchison scored on a put-back and Ashford converted a steal to go up by 18, LaPoynor drilled a trey with 40 seconds left in the quarter.

B.J. Lamb took the ball the length of the court in the waning seconds and laid it in at the buzzer for a 57-40 lead.

LaPoynor refused to go away quietly and opened the fourth quarter with a 12-4 run to get within nine.

After Cadarian Wiley slammed home his second dunk of the night and Mike Dancer scored a bucket, the Flyers rattled off nine unanswered points to make it 61-52 with 5:20 left.

Grapeland put the game away with a 14-0 run that included three baskets by Cadarian Wiley and one by Omarian Wiley, along with perfect 4-of-4 free throw shooting by B.J. Lamb and two by Murchison.

B.J. Lamb paced the Sandies with 24 points followed by Cadarian Wiley with 16, Murchison with 12 and Ashford with 10. Omarian Wiley had six points, Dancer four and Johnny Lamb three.

Ashford led the Sandies with seven steals and five assists.

Garrett Nuckolls, who was scoreless in the first half, led LaPoynor with 14 and Cooper Gracey had 12.

LaPoynor was declared a Class 1A State Co-Champion last year after winning its state semifinal game before the UIL suspended the tournament due to COVID-19 concerns. LaPoynor was elevated to class 2A when the UIL announced its 2020-2022 realignment and reclassification.