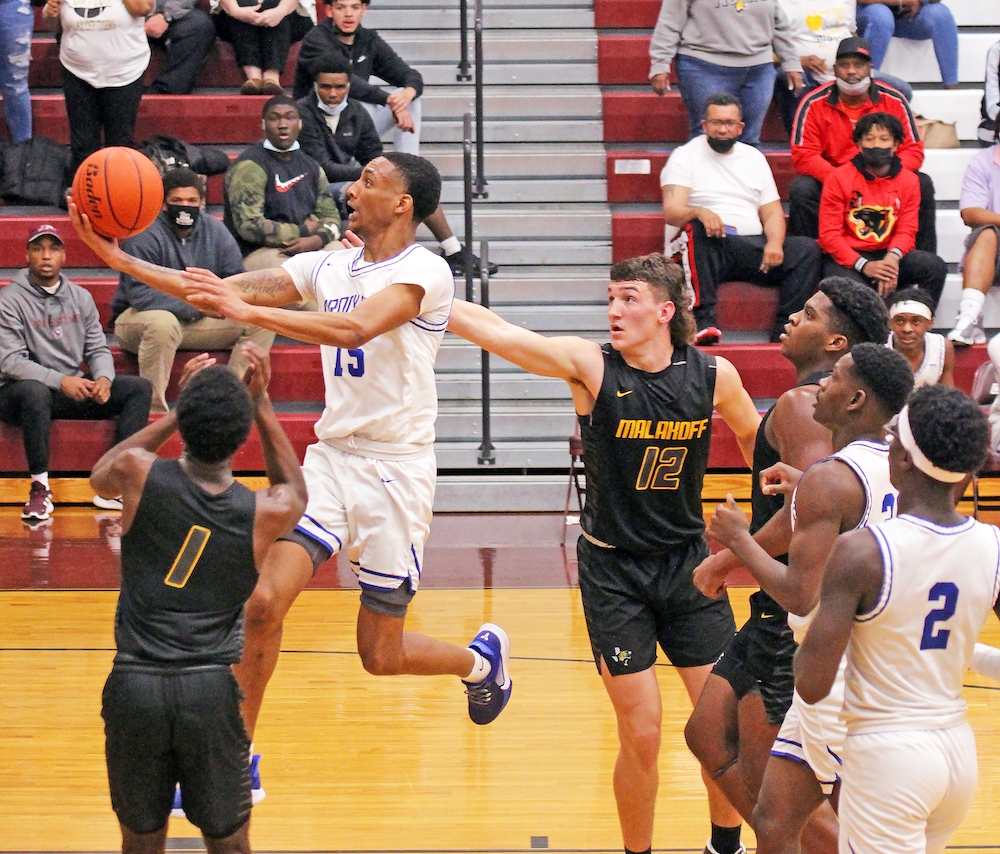 LARRY LAMB | HCC Crockett senior Ty White glides to the basket during the Bulldogs’ 60-57 area round victory over Malakoff.

Malakoff came into the area round unbeaten and ranked No. 9 in the state but the Crockett Bulldogs weren’t intimidated.

Coach Jordan Caldwell’s squad toppled the Tigers 60-57 Thursday night in Palestine and advanced to the third round for a clash with No. 14 Lorena at noon Saturday in College Station.

Closing out the first quarter with an 8-0 run, the Bulldogs took a 15-5 lead.

Malakoff got within seven in the second quarter but trailed 27-16 at halftime.

The Tigers started the third quarter by rattling off six unanswered points to make it a five-point game. Crockett answered with its own 6-0 spurt to push the lead back to 11, however, Malakoff got within six on two other occasions.

Senior Ty White splashed in a three-pointer and a deuce while senior Chris Purvis canned a bucket for a nine-point lead with 4:17 left.

The Tigers called a timeout and then heaved up a three-pointer that rolled around the rim several times before falling out.

After Purvis grabbed the rebound, White was fouled with 3:44 left and went to the line for two technical shots and two free throws. He nailed three of four, putting Crockett up by 12.

Baskets by Tayshawn Simon and D.J. Walker kept the Bulldogs in front by 11 with 1:20 left, but Malakoff finished strong with a 9-1 run that included a pair of buckets and five-of-six free throw shooting to close the gap to three with 11.4 seconds left.

The Bulldogs, who only made one of seven at the line down the stretch, missed an opportunity for two insurance free throws with 3.6 seconds left.

But their three-point lead was enough to punch their ticket to the third round.

White, seven of 11 at the line, led the scoring with 16 points. Walker tossed in 11 and Jadyn Collins rounded out double figures with 10.

Courtney Byrd finished with nine, all in the first half. Purvis had six and Keshun Easterling had four while Simon and Ja’Lyne Carruthers chipped in two apiece.

Nathan Jones led Malakoff with 16 and Jay Mosley had 14. Klayton Copeland, nine of 13 at the line, followed with 13. Karter Fuller, who fouled out with 3:41 left, scored seven.

“We knew 24 (Copeland) and 4 (Fuller) were their best players. I’ll take losing but I’m not going to let just one or two players beat me. I know both are a heck of a player but I’ve got 13 guys on my team,” said coach Caldwell. “We mainly focused on 24 defensively. They had several people in foul trouble early and that helped us a lot.”

“We came out slow in the second half and Malakoff went on that run. We had some guys that were making mistakes and getting down on themselves. I told the guys at this point it’s win or go home, so they rallied together and we got the W as a team. That’s what matters,” added Caldwell.