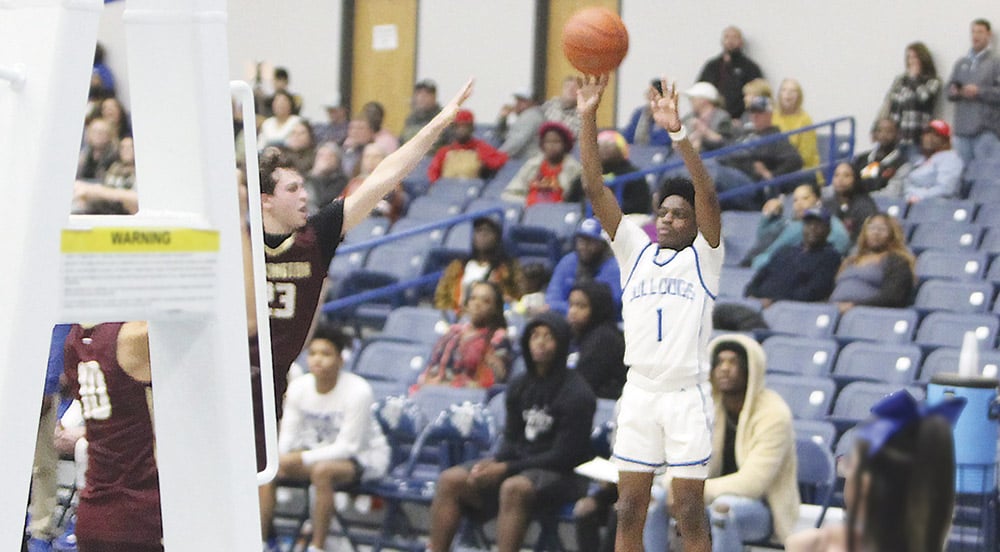 CROCKETT– Crockett Bulldogs eked out a 45-43 district win over the Tarkington Longhorns at The Hop on Friday night.

The Bulldogs were leading 40-34 early in the fourth quarter when Tarkington scored seven unanswered points to nudge in front 41-40 with 3:55 left.

On Crockett's next possession, Antwaain Boston swooshed in a 3-pointer from the left wing with :46 left for a 45-43 cushion.

Tarkington was forced to foul and sent Boston to the line twice for one-and-ones.

The junior missed the front end on his first trip to the line with 10.4 seconds left. Tarkington grabbed the rebound but Boston stole the ball and was immediately fouled, sending him back to the line with 2.1 ticks left.

Boston's free throw missed the mark. Tarkington collected the rebound and heaved up a desperation shot that hit the backboard and bounced away as the final buzzer sounded.

Crockett improved to 4-1 in district while Tarkington slipped to 3-2.

Crockett hosted Trinity on Tuesday and hits the road Friday for a showdown with undefeated district leader New Waverly.

Bulldog head coach Drae Murray said he lightheartedly scolded Boston after the game for missing his free throws down the stretch.

"Antwaain reminded me that he did hit that big trey that put us ahead. He's a gamer and a trooper. He normally makes free throws for us at the end of the game. The ball just didn't bounce his way tonight," said Murray. "Antwaain hit the big three and then he came up with a big steal to end the game, so we'll overlook those free throws."

The Bulldogs led 10-4 after a quarter but Tarkington cut it to a point early in the second. Crockett reeled off a 12-0 run to pull away and took a 26-15 lead into halftime.

Tarkington went on a 10-0 tear in the third quarter to whittle Crockett's lead to 29-26 at the 3:53 mark. The Bulldogs led by as many as six but the Longhorns scored in the closing seconds of the third to make it 36-32.

Collins was Crockett's only double-digit scorer with 15.

Courtney Byrd finished with 7, followed by Boston with 6 (2 treys) and Tywoin Delane with 5. Chase Ivey had 4 while Nate Ivey and Jaroderick Holmes each contributed a trey. Iverson Rischer rounded out the scoring with 2.

"We knew this was going to be a tough one just because of the way Tarkington plays. At first we controlled the tempo. In the second half for some reason we stopped running and got out of our game plan. They controlled the tempo and that's how they were able to get back in the game," said Murray. "They want to play games in the 40s. If it's in the 40s they feel like they have a shot. We knew we had to get in the 60s to really run away with it and we couldn'tdo it."

"We only scored 10 in the third and 9 in the fourth. We just didn't play well in the second half. Luckily we had a strong second quarter that helped us out," said Murray.

The Bulldogs allowed Tarkington "too many open looks and second-shot chances" in the second half, the coach added.

Last Tuesday, the Bulldogs cruised to a 66-44 road win over Onalaska.

Byrd achieved a double-double with 12 points and 11 rebounds.

Nate Ivey knocked down three triples in first half and finished with 11.