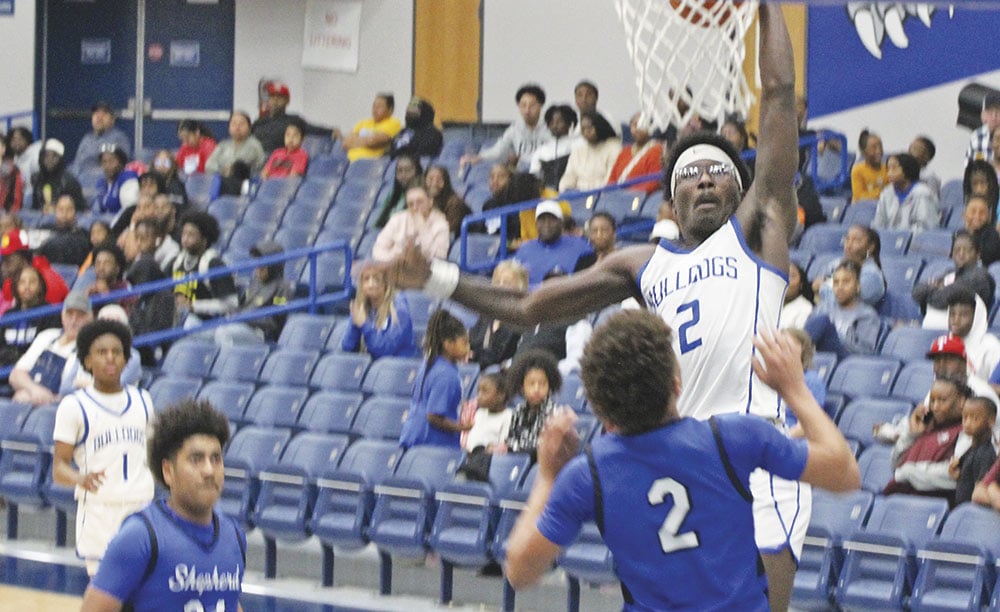 Crockett's Jadyn Collins goes up for an electrifying slam dunk against Shepherd.

After falling to Coldspring 61-53 on the road Tuesday, the Bulldogs beat Shepherd 66-51 at home Friday and improved their district mark to 2-1.

The first quarter of Friday night's game with Shepherd (1-2) showed flashes of a barn burner as the Bulldogs knocked down four 3-pointers. Shepherd scored the last two buckets in the closing seconds to take a 20-17 lead.

Opening the second quarter with an 8-0 momentum-shifting run, Crockett outscored the Pirates 20-7 to take a 37-27 halftime lead. After two quick buckets by Courtney Byrd, Jadyn Collins electrified the dome with a steal and rim-rattling slam dunk. Another bucket by Byrd capped the 8-point outburst.

Shepherd scored first in the third quarter but Crockett answered with a 12-0 run to pull away 49-29 at the 5-minute mark. After baskets by Byrd and Jaroderick Holmes, the next eight points were courtesy of Collins. The senior scored on a lay-up and then heaved in back-to-back treys to complete the frenzy.

Crockett carried a 53-37 lead into the fourth and led by as much as 19 down the stretch.

Murray said earlier in the day he had expressed concern to assistant coach Brent Stephens about the absence of third quarter runs this season, so he was pleasantly surprised when the Bulldogs rattled off that 12-0 run early in the third.

"Last year we went on 22-6, 22-4 runs to start the second half. I've been dying for this team to come out in the third quarter and go on a big run. They did that tonight. It's funny because I just had this conversion," he said.

Byrd recorded a double-double with a team-high 21 points and 10 rebounds.

Collins, who drained three treys, finished with 18 points and 7 rebounds.

Antwaain Boston had 7 (1 trey) and Chase Ivey drained a pair of treys to finish with 6. Iverson Rischer and Holmes chipped in 4 apiece and Nate Ivey rounded out the scoring with a 3-pointer.

"We've got five guys who can really shoot the ball. We've been very inconsistent but tonight we had four guys making three-pointers," added Murray.

Shepherd was led by Jesse Valerie with 21 and Tristen Cullum with 13.

Noting that Rischer had a big game defensively, Murray said, "He's probably one of the best defenders in the state, seriously. He's that good on the ball defending."

Murray cited Chase Ivey as an offensive spark plug. "He came in and hit those two threes in the first quarter and busted it open for us. That forced Shepherd to be more aggressive guarding us on the perimeter that created driving lanes. We were able to attack those driving lanes and drop it off inside to Courtney, who was a monster."

Collins was another key figure on offense, said the coach. "I've been telling Jadyn he's going to get a lot of attention because he's scoring so much. Just drop it off and share the ball a little bit. He did that tonight and it allowed those guys to make shots," said Murray.

"Once those gaps were bigger, Jadyn was able to get to the goal and finish all those lay-ups. He had that monster slam-dunk that brought energy to the gym and helped us out tremendously," the coach added.

Unlike Friday's game, the Bulldogs never got untracked against Coldspring.

"It was just one of those games where we could never go on a run. It was just back-and-forth the entire game. Neither team could pull away until late in the game when Coldspring was able to get the turnovers they needed and make the shots they needed," said Murray.

"Coldspring got the 50-50 balls and you could tell they just wanted it more. They were playing at home and they were playing Crockett, which always a rivalry-type game for both teams."

Collins paced the Bulldogs with 27 points, including a trey. He was 6-of-9 at the line.

"It was a weird game. Nobody played well for us individually, except for Jadyn on offense. I told him he could have played better defensively," said Murray.

After a trip to Onalaska, the Bulldogs have back-to-back home games against Tarkington on Friday and Trinity next Tuesday.