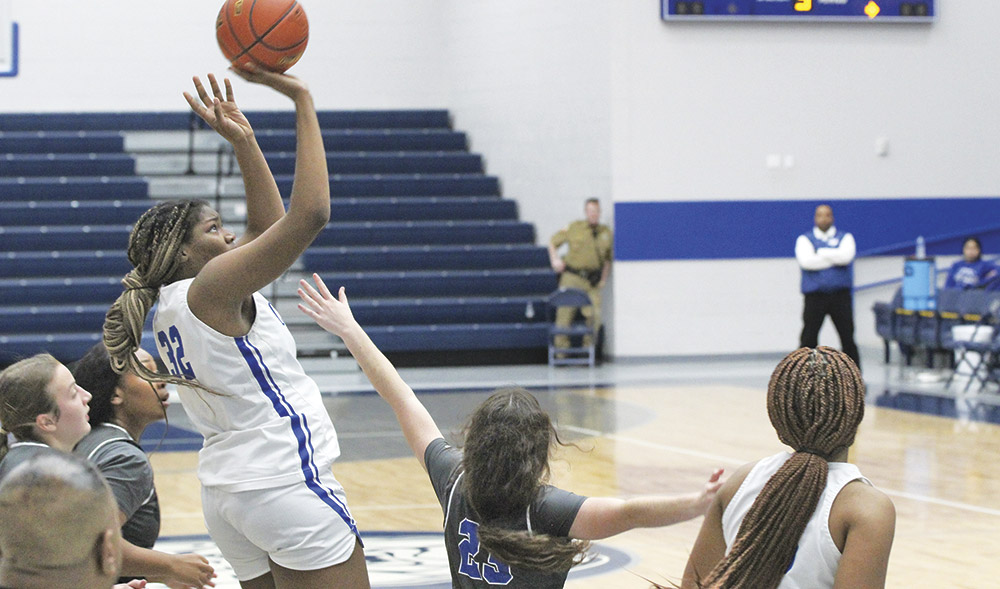 CROCKETT — Crockett Lady Bulldogs took care of business on the road and at home last week to boost their district record to 4-1.

Against Shepherd, the Lady Dogs zoomed out to 16-2 lead in the first quarter and took a 27-6 lead into halftime.

"We only outscored them 11-8 in the third quarter and that's not good. We don't need a halftime because we always seem to come out too flat," said Johnson.

Tocarra Johnson led the scoring with 20 and Tania Davis had 15.

Edrinette Simpson chipped in 5 while A'Naya Wooten and Naomi Taylor had 4 apiece. Ty'Reyanna Beasley and Keyonna Davis rounded out the scoring with 2 apiece.

Johnson noted that Simpson "stepped up as a freshman" to contribute points and hold Shepherd's second-best player No. 10 (Nelson ) to 7 points. "She helped us on defense and played the role I asked her to do, so the game ball would go to her," the coach said.

"I have to brag. I hope I don't jinx us but we shot 55 percent from the free throw line," said Johnson, whose team sank 12 of 22 against Shepherd in contrast to only hitting 10 of 27 (37 percent) in the Coldspring game.

The Lady Bulldogs had a season low of 21 turnovers. "We usually have that many in a half. We had 13 in the first half tonight and 8 in the second. That's an accomplishment," the coach said.

Tania Davis, Beasley, Wooten, Johnson and Taylor made up the starting five against Shepherd.

"I had to change my lineup because we're playing without my best defender who is grade ineligible. I honestly did not know how this game would go but we came around. We had to change and mold, which we could tell in spurts. The good part is in three weeks she'll be back. The bad part is that we've got some tough games coming up before then," said Johnson.

Only two games remain in the first half of district. After playing Onalaska, Crockett hosts Tarkington on Friday and Trinity comes to town next Tuesday to start the back end of the district schedule.

"We've only got a week or two to get it done. We have to pick it up quickly," said Johnson. "I asked the girls if Fairfield showed any mercy when they beat us 90-14 last year. I said, so why are we giving teams mercy? Play your game."

Against Coldspring, the Lady Bulldogs led 16-10 after a quarter and 25-20 at the break. After seeing their lead dwindle to 33-31 in the third, the Lady Dogs picked up the pace in the final period and dominated the Lady Trojans 19-8.

The bright spot was a 30-point performance by Johnson, who scored 13 of Crockett's 19 points in the final period to put the game away.

All of the other CHS scorers were held to single digits. Wooten had 7, Taylor 6, Tania Davis 4, Keyonna Davis 2, La'Kyra Hamilton 2 and Simpson 1.