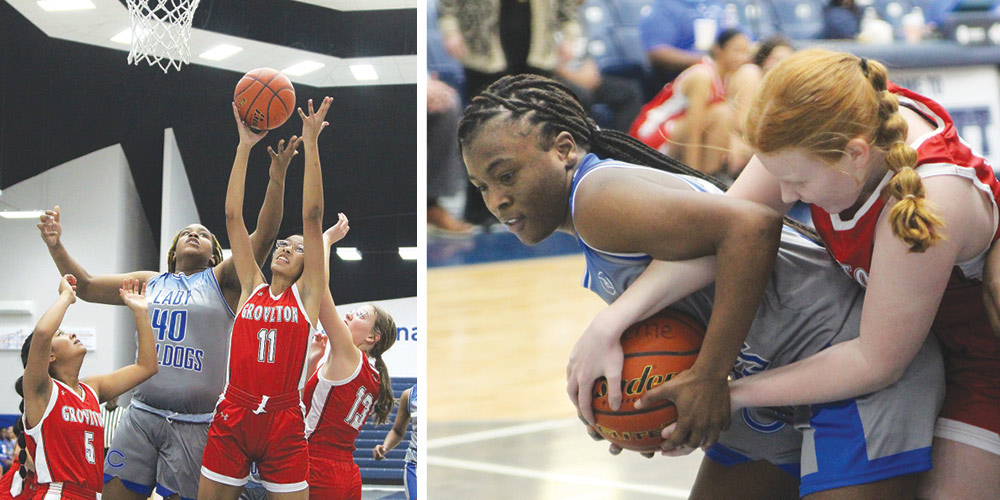 Junior Naomi Taylor (40) made her varsity debut for the Lady Bulldogs against Groveton last Wednesday. A Groveton player tries to take the ball away from Crockett's Ty'Reyanna Beasley during a non-district game last Wednesday at The Hop. Photos by Larry Lamb

CROCKETT— Crockett varsity girls closed out 2022 with a pair of non-district wins before getting back to the district grind.

The Lady Dogs gave coach TaNesiah Johnson a 40-30 road win over Leon for her 40th birthday on Dec. 19 and a belated Christmas gift Dec. 28 with a 56-38 home win over Groveton.

Playing last Wednesday at The Hop, the Lady Dogs handily defeated the Lady Indians but Johnson wasn't satisfied with the effort.

"Rusty, rusty, rusty!" exclaimed Johnson. "This is what happens when we come back from Christmas break. We knew it was going to be this way, but we still have to play through it. Both teams have been sitting at home."

Crockett was leading by 13 late in the first quarter when Groveton freshman Kiki Smith heaved up a buzzer-beater 3-pointer to close the gap to 21-11.

The Lady Bulldogs led 29-16 at the half and outscored the Lady Indians by five in third for a 45-27 lead. Both teams scored 11 in the final period.
Senior Tocarra Johnson led with 20 points and sophomore Tania Davis had 14, including an early trey.

"It was a good win, but coming out of Christmas break it's always going to be ugly," the coach said.

This was Taylor's first varsity game since she was approved by the UIL. Taylor, a move-in from West Palm Beach, Fla., played on the junior varsity pending a green light from the UIL.

Taylor did not participate in school basketball in Florida, but gained experience playing club ball.

"I think Naomi will help us tremendously in district, not only at the guard position but she can go inside or out. Plus, she has the height at 6'2" or 6'3".

She got hurt playing volleyball and had to sit out, so now it's a matter of getting her in basketball shape.

"We're easing Naomi into it, but once we get rolling we're looking at 25 or 30 minutes playing time a game. She'll eventually be in the top five. I don't want to throw her out on the floor when I still have other kids working hard," the coach added.

Since there was no JV game, Johnson's 13-player roster included several JV move-ups. "We wanted to let them get a taste of varsity basketball.

Some of the teams in our district don't have a JV so I'll mix some JV players into the varsity to reward them," the coach said.

Travelling to Jewett earlier in the week, the Lady Dogs finished strong to win by a 10-point margin.

Tania Davis led with 14 points and Wooten followed with 12. Beasley, Hamilton and Keyonna Davis had 4 apiece and Tweety Simpson scored 1.

Coach Johnson noted Tocarra Johnson had to sit out the Leon game due to her ejection in the first half of the previous game against Anderson-Shiro.

"With Tocarra being out we struggle a little bit. We'll have to get over that because she won't be here next year. I think the Anderson game woke up the other girls so that we still played well without her and lost by four, which was the two (technical fouls) called on us. I thought we handled that well after she was ejected," said the coach.

With district play cranking back up this week with a trip to Coldspring on Tuesday, Johnson said the Lady Bulldogs must "bounce back quickly."

Crockett boys and girls teams host Shepherd on Friday and travel to Onalaska next Tuesday.