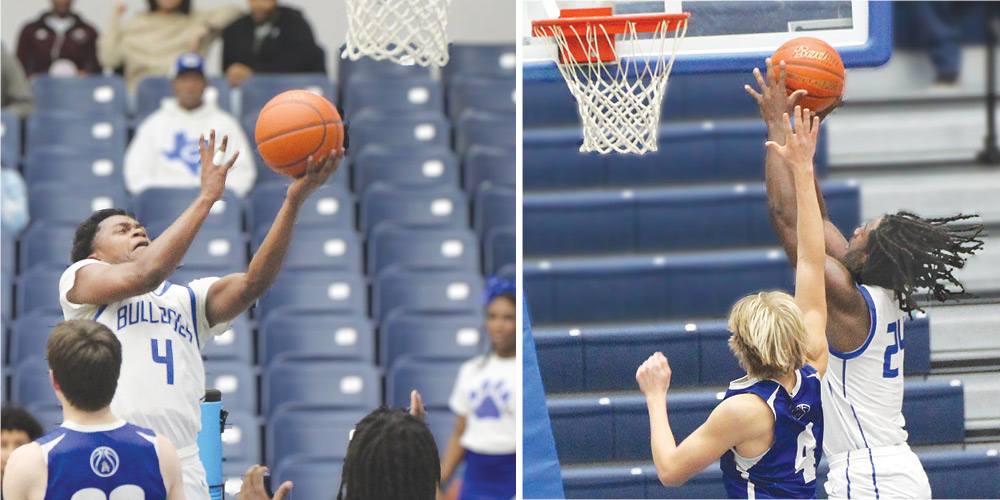 Crockett's Iverson Rischer (4) goes to the hoop against Anderson-Shiro in the District 23-3A opener last Tuesday at The Hop. Senior Courtney Byrd made his presence felt on the offensive boards in the second half against Anderson-Shiro. Byrd converted a number of second-chance shots and finished with 17 points in the Bulldogs' victory. Photos by Larry LambBy Larry Lamb
This email address is being protected from spambots. You need JavaScript enabled to view it.

CROCKETT – The Crockett Bulldogs picked the perfect time to snap an eight-game skid.

The Bulldogs trailed by as much as 10 in the second quarter before cutting the Owls' lead to five at halftime, 28-23.

Senior Courtney Byrd joined the lineup in the third quarter and sparked Crockett with 11 points while making his presence known on the boards.

Three straight baskets by Byrd got the Dogs within three before the Owls scored in the closing seconds to give them a 42-37 lead at the end of three.

A layup by Holmes, two by Iverson Rischer, two baskets by Byrd and two free throws by Boston completed the scoring spurt for a 62-46 lead with 1:13 left.

A trey by the Owls with 1:03 left stopped the bleeding.

"The team you saw in the fourth quarter is the team that I think we have the potential to be and the team I think we'll eventually be. Why we haven't gotten to that level of play by now, I don't know," said Murray.

"That fourth quarter team is what I imagine us being. We've shown flashes that we can be really good a few times this year but we just haven't completely put it together yet," added Murray.

Byrd's appearance in the second half was a game-changer for Crockett.

"Courtney (Byrd) rebounded really well and made a big difference in the second half," said Murray. "When he came in he got four offensive boards in a row. That was the difference. He gave us second-shot chances and we were able to shoot the ball freely knowing that if we missed, Courtney was there to get the rebound and put it back in."

Murray noted a crucial six-point spurt by Rischer in the second quarter after the Owls opened up a 10-point lead. "That saved us. If he doesn't go on that run we could have been down by at least 16," the coach said.

Zandric Anderson and Ajani Ellis also had buckets in the second to keep Crockett in the game and hold the Owls to a 28-23 halftime lead.

Senior Tyvon King provided a spark on the defensive side with three steals, along with scoring on a layup and free throw, the coach added. "He doesn't get to play much, but he did a lot in the three minutes he played tonight."

Byrd finished with a game-high 17 in just two quarters of action. Boston and Rischer both had 10 points, while Holmes had 7 and Collins 6.

Nate Ivey and King each scored 3 while Ellis, Chase Ivey, Zandric Anderson and Tywoin Delane chipped in 2 apiece.
"It was a tough game. Anderson-Shiro always plays hard and coach (Jeffrey) Trant always has his team ready to play," said Murray.

The TABC preseason forecast for District 23-3A picks Crockett as the favorite, followed by Tarkington, New Waverly and Coldspring-Oakhurst.

Since Crockett doesn't resume district until Jan. 3 at Coldspring, the Bulldogs will have a chance to iron out problem areas during this week's Houston County Classic.