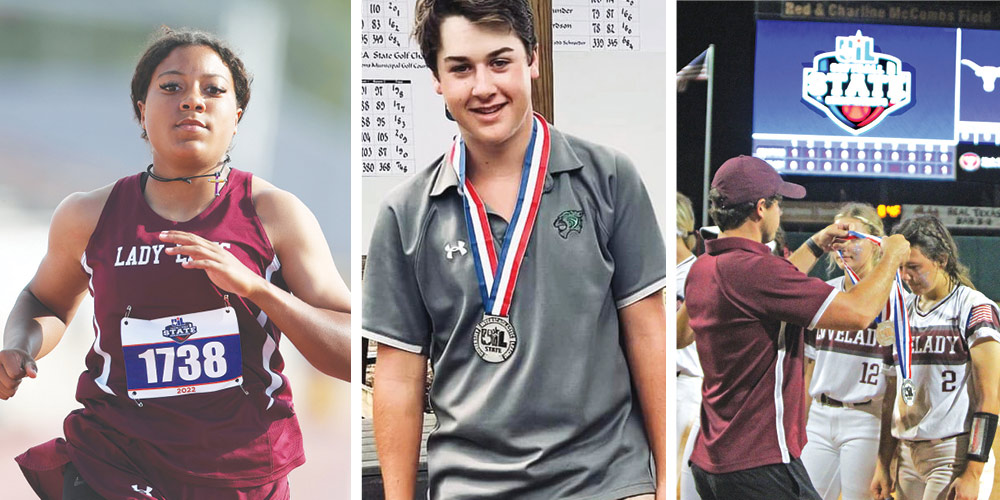 As 2023 approaches, Houston County is closing the books on another banner sports year that included state appearances by local athletes in baseball, softball, track and golf.

Here's a look at some of the highlights through the first six months of 2022.

Hudson won the Gold Bracket championship in the Houston County Holiday Classic. Crockett finished second in the Silver Bracket and Grapeland was third in the Bronze Bracket. The last 2-1/2 games of the tournament were played in the Old Crockett High School gym due to a bubble that developed in a section of the hardwood floor in the Hopkins Activity Center.

The Crockett Bulldogs topped the century mark in a 100-64 district win over Westwood.

The Grapeland Sandies drained 15 3-pointers on the way to beating Groveton 80-41.

The Lady Bulldogs clinched fourth place in District 20-3A and were eliminated by Little River-Academy in bi-district.

The No. 2 ranked Lady Lions capped a 12-0 district championship run and won their first two playoff games to set up a showdown with

No. 3 Martins Mill in the regional quarterfinals,

Kennard Lady Tigers fell to a highly ranked Zavalla in the bi-district round of the state basketball playoffs.

Crockett Bulldogs knocked off Franklin 75-52 with a 32-9 fourth quarter frenzy to earn a share of the District 20-3A championship.

Entering the playoffs as undefeated district champions, the Grapeland Sandies defeated Cayuga in bi-district and Crawford in the area round.

The Bulldogs handily defeated Rogers 80-49 in bi-district but saw their hoops season end with a 59-54 loss to Lorena in the area round.

Jonney Smoldas of Crockett reeled in a 13.34-pound ShareLunker bass, the first Legacy Class fish for Houston County Lake since 1990.

Martins Mill ended the Lady Lions’ season with a 67-65 decision in the regional quarterfinals.

Defensive MVP and Lexi Price was Newcomer of the Year.

Lady Bulldog Tocarra Johnson was voted District 20-3A Co-Offensive Player of the Year.

District 20-2A coaches tabbed Grapeland’s Omarian Wiley as District MVP and Cadarian Wiley as Co-Defensive Player of the Year. Slade Murray of Lovelady was Co-Offensive POY.

Grapeland's boys basketball season ended with a 72-60 loss to LaPoynor in the regional quarterfinals in Tyler.

Lovelady softballers put on a homerun clinic with four dingers against Groveton. In the next game, Mimi Sandoval hit a grand-slam homer against Alto.

Crockett girls soccer finished fourth in district and were eliminated the first round by Henderson.

TABC All-Region basketball honors were bestowed on six county athletes. Crockett’s Delvin Walker was named to the Class 3A boys team while Lovelady's Slade Murray and Grapeland’s Omarian Wiley were class 2A honorees.

A grand-slam homer by Slade Murray propelled Lovelady past Normangee, 7-6.

Lovelady’s girls track team ran away with the district championship while the Lions captured second place.

Lovelady track teams duplicated their district showings at the area meet with the Lady Lions taking first and the Lions finishing second. A combined total of 23 athletes qualified for regional.

Lovelady and Latexo softball teams geared up for the playoffs as undefeated district champions.

Crockett tracksters qualified for regional in five events led by second place showings of Joseph Tuggle in pole vault and La’Kyriah Hamilton in the 200-meter dash.

Hundreds of cyclists raced through downtown Crockett during the Davy Crockett Classic criterium.

Five girls and three boys represented Lovelady at the state track meet in Austin and Mihyia Davis brought home a bronze in the 100-meter dash.

CHS pole vaulter Joseph Tuggle placed third in the regional meet and advanced to the class 3A state meet.

Latexo and Lovelady softball teams were both dominant in their playoff openers. Lovelady swept Shelbyville while Latexo knocked off Snook.

Kennard's softball team earned three All-District Superlatives. Kaylin Parrish was Defensive Player of the Year, Halli Hunt was Newcomer of the Year and Serenity Smith was Pitcher of the Year.

The Lady Lions continued their string of shutouts against Como-Pickton, 10-0 and 10-0 in the regional semifinal.
In the class 1A baseball regional semifinal series, Kennard outlasted Chester in a three-game decision.

The Lady Lions brought home the class 2A State Runner-up trophy in their Austin debut. The knocked off defending state champion Stamford in the state semifinal but fell short against top-ranked Crawford 3-0 in the championship game.

Coaches Association. Davis and Macie LaRue were recognized as 1A-4A Legacy All-Stars selected by TGCA.
Lovell was also selected to play in the TGCA All-Star softball game in July.

Kennard Tigers earned their second straight trip to Round Rock by knocking off Union Hill in a regional series 10-0, 4-5, 16-4. The Tigers' championship dreams were shattered, though, with a 1-0 loss to Nazareth in the state semifinal.

Latexo softball coach Greg Horn was named District 25-2A Coach of the Year and Charlee Biano was voted MVP. Katy Allen and Lauren Woodard were named Co-Pitchers of the Year and Baylee Omelina was Catcher of the Year.

Lovelady players awarded District 21-2A Superlatives were Mihia Davis as MVP, Lovell as Defensive MVP, LaRue as Pitcher of the Year and Morgan Womack as Catcher of the Year.

Post-season softball honors continued to trickle in for Lovelady and Latexo.

Latexo players Charlee Biano and Natalie Nicol were selected for the TGCA All-State Team along with Lovelady's LaRue, Davis and Lovell.

The 10u Crockett Bulldogs outlasted Onalaska 23-20 in a three-plus hours battle for the District 2 Dixie Youth Baseball Championship and advanced to the Dixie AAA South Regional Tournament.

4-H Shooting Sports member Trey Musgrove competed in Abilene, where he finished as HOA (Highest Over All) in the junior division.