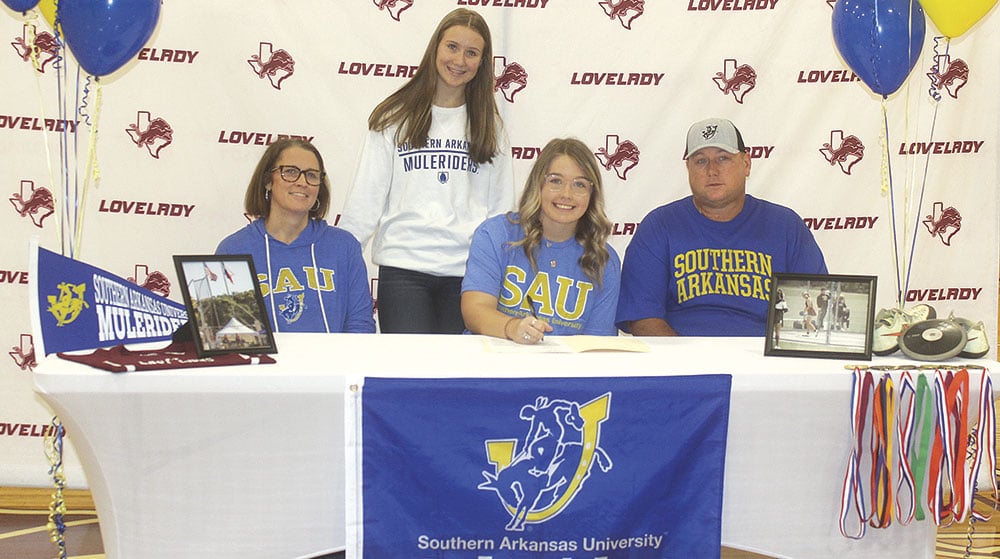 Lovelady senior Kylie Pugh signs a national letter of intent with the Southern Arkansas University Muleriders as a discus thrower. She is pictured with her parents, Mandy and John Pugh, and sister Shelby during a ceremony Monday afternoon. Photo by Larry Lamb

LOVELADY — Senior athlete Kylie Pugh made her college choice official on Monday when she signed a national letter of intent to take her discus-throwing skills to Southern Arkansas University in Magnolia, Ark.

Pugh was Region III discus champion and placed fifth at the UIL class 2A state meet her junior season.

Pugh, who plans to major in elementary education, said SAU is good fit for her because of its small-school atmosphere.

"Going to a class 2A school my entire life, I liked how small and close-knit they are at Southern Arkansas. It reminds me a lot of Lovelady," she said.

Pugh didn't get a chance to compete her freshman year due to Covid, but still devoted many hours to practicing discus throwing. "I had competed in track and field in junior high but I wasn't the best. I really didn't start focusing on discus until my freshman year," she recalled.

Her hard work paid off and Pugh reached the area level in discus competition as a sophomore.

After getting a taste of competing on the big stage, Pugh wants more her senior year. "My goal is to make it further than I did last year. I'm trying to work my way towards state and hopefully medal there," she said.

A multi-sport athlete, Pugh was All-District Setter of the Year in volleyball this past season and is currently on the Lady Lions basketball team.
Lovelady track coach Will Kirchhoff said, "Southern Arkansas got a heck of a deal with Kylie from the classroom perspective to track and field. She can do everything, so she's a fantastic young lady."

Kirchhoff continued, "Kylie is a hard worker that always puts everybody before herself and wants to do whatever is best for the team. The good thing about track and field is it gives her a chance to shine because she puts in countless hours to get better. It's something that takes a lot of time and dedication to master. She's always stayed the course and every single year she just wants to get a little bit better. She has one more season at Lovelady, so we're excited to see what she's going to do in the spring. She'll be back hunting those medals this year and I promise you she'll work hard for it."