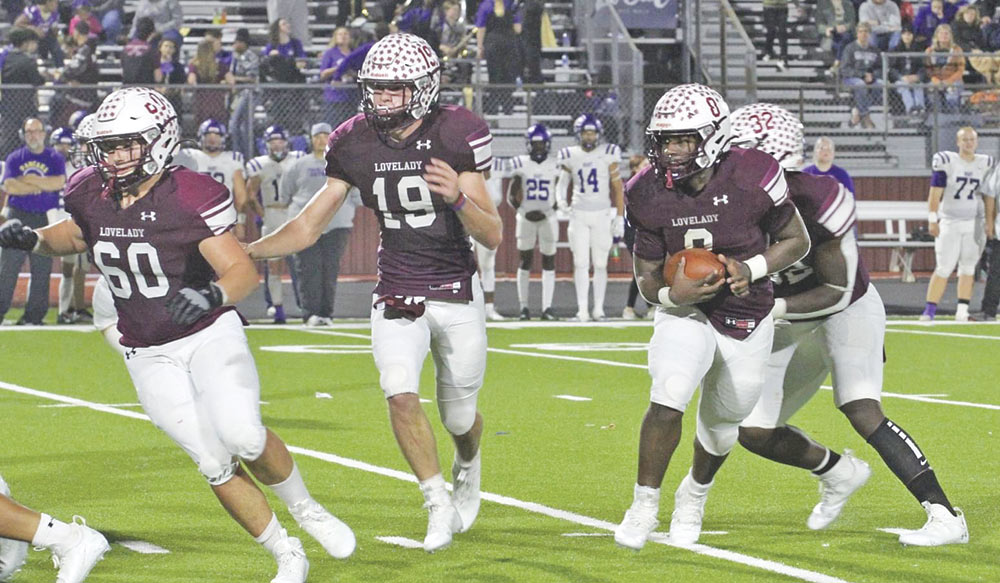 Lions Ben Monk (60) and Brandon Fry (19) lead the way for Dayvian Skinner (8) on a running play against Mart in the regional final last Friday. Photo by Lawanna Monk

Mart (14-0) meets Burton in the state semifinals at 7 p.m. Thursday in Round Rock. New Home (13-1) and Albany (12-2) face off in the other semifinals match-up Thursday in Sweetwater.

Lovelady, which had lost to Mart two straight years in the second-round, ended the 2022 season with a 12-1 record.

Mart turned the ball over on fourth down at the Lion 26 on its first possession but scored on its next five series.

Quarterback Jonah Ross broke a long run to the 13 yard line and scored on a 1-yard plunge at the 2:47 mark in the first quarter.

Mart erupted for four touchdowns in the second quarter for a 35-0 halftime lead.

Early in the second quarter, Ross scored from 2 yards out to cap a 9-play, 78-yard drive. The Panthers, who were perfect on eight extra-point kicks, led 14-0 with 10:28 left in the half.

Forcing the Lions to punt on their next two series, Ross found Wesley Carroll down the right sideline for a 68-yard TD with 8:03 on the clock.

After running back Ja’Deriun Bell zipped 73 yards to paydirt with 3:55 to go, Lovelady marched to the Mart 28 before turning the ball over on downs.

The Panthers took over and drove down the field for a 26-yard TD run by Ross with :55 left in the half.

After another defensive stop by Mart midway through the third quarter, Ross took the first snap and rambled 57 yards for a quick score with 5:43 on the clock.

Lovelady finally got a break when Brandon Frye recovered a fumble on the Mart 28. After Skylar Pipkin picked up a yard on the first play, Dayvian Skinner carried to the 11 and took it to the 1 on the next play. Easterling scored on a 1-yard sneak two plays later, but a 2-point conversion came up short, leaving the score 49-6 with 5:24 left.

Mart capped the scoring with a 5-yard run from Jordan Vincent with 1:29 to go.

Early in the second quarter, Easterling threw a deep ball to Pipkin for a 65-yard touchdown that was called back on a holding penalty

The Panther quarterback ran for 208 yards and four touchdowns along with throwing for 128 yards and a score.

Bell added 216 yards and two scores rushing for the Panthers, who rolled up 651 yards for the game.

Dayvian Skinner ran for 135 yards on 20 carries for the Lions, who finished with 171 yards.