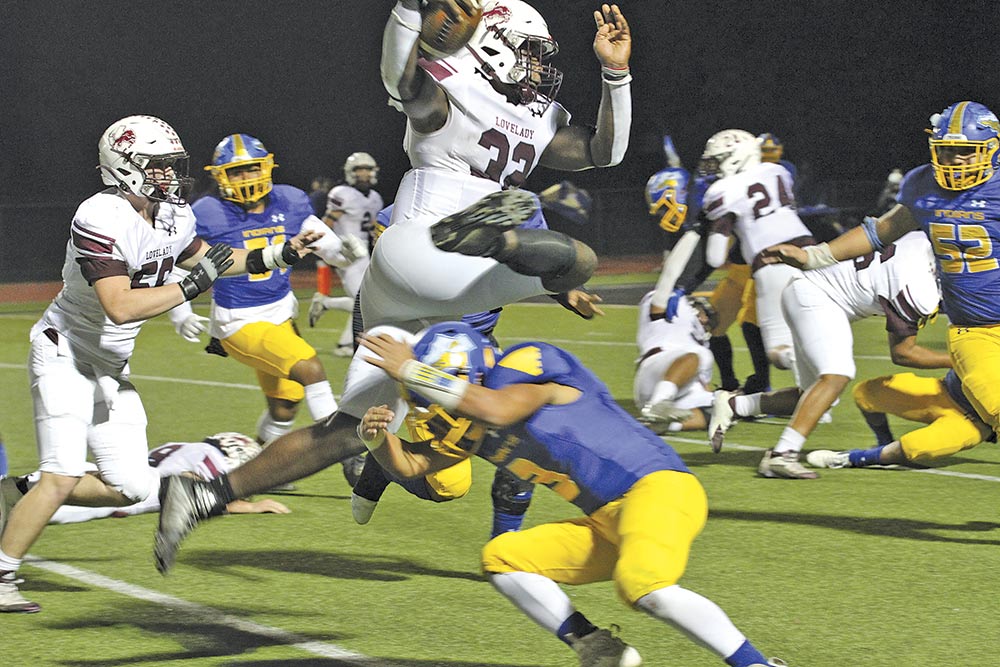 Lovelady's Shaun Easterling (32) hurdles a Price-Carlisle defender on the way to the end zone in the regional semi-finals Friday night in Palestine. Photo by Lawanna Monk

The Lions scored twice in the third quarter to take a 26-21 lead and put the game away with 1:02 left.

After a first quarter defensive struggle that resulted in punts by both teams, the Lions drove to the 5 yard line on their first possession of the second quarter before turning the ball over on downs.

A 40-yard punt return by Jayton Crawford to the 20 yard line sparked the Lions' offense. Shawn Easterling managed six yards on three carries and Dayvian Skinner picked up 13 on two runs before punching the ball in from 1 yard out at the 9:02 mark.
Carlisle started its next series with poor field position when the return man was immediately nailed at the 16-yard line. After picking up 9 yards on two plays, the Indians broke a 75-yard touchdown run. An extra-point kick put the Indians in front 7-6 with 8:33 left in the half.

A fumble on a Lovelady punt set up Carlisle's next score. Punter Skylar Pipkin, forced to scramble under pressure, fumbled and the Indians took over at the Lion 32. The drive started off shaky with two 5-yard penalties, a sack by Skinner and an incomplete pass. The Indians completed a long pass to the 5 yard line and picked up 3 on the next play to set up a 2-yard TD. Another PAT put the Indians up 14-6 with 4:43 left in the half.

Blake Patrick fair-caught the Indians' kickoff and the Lions went to work at their 28. After Easterling escaped to the 10 yard line, the Lions scored three plays later when Cortavies Whitaker hit the outside and went in for the TD.

A two-point conversion attempt was no good, leaving the Lions behind 14-12 with 2:13 left in the half.

After the kick, Carlisle drove down the field and scored on an 11-yard TD pass with :54 left in the half.

Carlisle started the drive at its 26 where Landen LeBlanc stopped the return man but the Indians quickly moved across midfield to the Lion 32 on the first play. Carlisle scored three plays later and tacked on the PAT for a 21-12 halftime lead.

The Lions closed the gap early in the third quarter with a 57-yard scoring drive after Patrick fielded the kickoff at the Lion 43.
Easterling carried four times, including a 20-yarder and threw to Crawford for 17. Skinner picked up five yards on three carries and capped the drive from 4 yards out. Offensive line blocking by Erik Castillo, Ben Monk, Tyler Gilchrist, Silas Strength and Jordan Blackmon opened holes for both Skinner and Easterling.

An unsuccessful conversion left the Lions trailing 21-18 with 7:15 left in the third.

Lovelady fans were able to breathe a little easier after a three-and-out series by Carlisle.

Taking over at their own 34, the Lions scored nine plays later on a 28-yard scamper by Skinner.

The Lions drove across midfield with Easterling and Skinner alternating carries. Easterling picked up 18 to the Carlisle 28 and Skinner took it to the end zone on the next play. Easterling's conversion put Lovelady in front 26-21 with 1:10 left in the third.
An interception by Easterling at the Lion 32 thwarted a Carlisle threat early in the fourth quarter. The Lions drove down the field and turned the ball over on downs at the 4 yard line.

Carlisle's next possession was stymied when Pipkin picked off a pass at the Lion 43.

Lovelady drove down the field and scored with 1:02 left to ice the win.

Back-to-back 18-yard runs by Easterling and Skinner quickly put the Lions at the Carlisle 20. The Lions scored five plays later when Easterling connected with Brandon Fry on a 7-yard end zone toss. A conversion play failed, leaving the Lions with a 32-21 cushion.