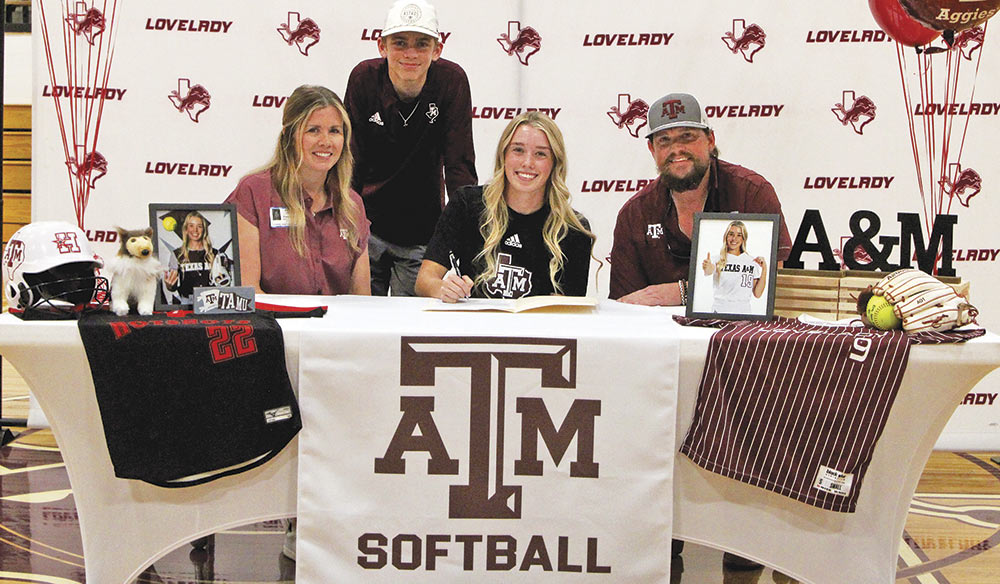 Scout Lovell signs a letter of intent to play softball for Texas A&M University during a ceremony Wednesday, Nov. 9. She is pictured with parents Sherri and Heath Lovell, and her brother, Ryder. Photo by Larry Lamb | HCC

Senior Scout Lovell signed a National Letter of Intent on Wednesday, Nov. 9 during a ceremony in the old high school gym.

"I like the tradition, the people, the coaches and I love the players. It's a great school and I know I'm going to get a great education," said Lovell.

Lovell plans on majoring in biomedical sciences, but is undecided on a career choice at this time.

Although Lovell plays shortstop for the Lady Lions, TAMU recruited her as a third base/utility player.

Aggie softball coach Ford commented, “Scout is someone that we have been actively recruiting for quite some time. Scout is very versatile and someone that can play basically anywhere on the field. We are thrilled that Scout is joining us here in Aggieland.”

Lovell led the Lady Lions to a 35-5-3 record that included a 2022 UIL 2A state runner-up finish and a perfect 11-0 mark in district action. She earned District 21-2A Defensive MVP honors, was named to the UIL Class 2A State All-Tournament Team as a shortstop and played in the TGCA All-Star Game in July.

Lovell earned District 21-2A MVP honors as a freshman in 2020 and again as a sophomore in 2021, while boasting a .431 career batting average. She belted 14 home runs her sophomore season.

With her senior softball season still ahead, Lovell's list of accolades will surely grow longer.

The future Aggie said playing in the UIL state softball tournament was the highlight of her high school career.

"It was so cool getting to be with my friends in Austin and playing for the state championship," she said.

Since Lovelady and A&M's colors are both maroon-and-white, Lovell says she will feel right at home wearing an Aggie uniform.

Lovell's love of softball began when she was 10 years old. "That's when I really started getting serious about it. I started playing travel ball and playing more competitively," she recalled.

Kirchhoff continued, "As sad as we are to see her move on, we're excited to see where she's going. She's invested so much into our program, we can't thank her enough. We're just so proud of this young lady's accomplishments."

Former Lady Lions coach Jordyn Hester was among the well-wishers attending the ceremony and had high praise for the player that she coached for three years.

"She's a great athlete. I hate that I don't get to coach her during her senior season, but watching her work and be successful her freshman through junior year was a great experience. She taught me as a coach tons about softball because she is so knowledgable," said Hester. "Her work ethic and the work that she put in outside of high school softball helped carry our team to our state runner-up finish last year. She's definitely the epitome of a kid that you want on your team. She's a spark plug. She's the kid that's going to push everyone around her. It was a pleasure coaching Scout."

The next time Hester and Lovell are on the same softball diamond, they will be in opposite dugouts. Hester has returned to her alma mater to become head softball coach for the Groveton Lady Indians, one of Lovelady's district rivals.

Lovelady's new head softball coach Peyton Hoffman was an assistant last season and had a chance to watch Lovell progress her junior year.
"The most impressive thing about Scout is that she is probably one of the hardest working kids I've ever seen. She's like a do-it-all player. She can steal, she can hit and she's outstanding at shortstop. She's really one of the best players at the 2A level. She's phenomenal. There's nothing she can't do on a softball field," said Hoffman.

"I'm real excited about this year. We lost some good (seniors), but we've got a good bunch coming back. I feel pretty good about it," added Hoffman.

In addition to a trip to Austin for the UIL state softball tournament, Lovell was a state qualifier in pole vault and the 4x200 relay.

The night before the regional track meet, Lovell played catcher in a gruelling double-header playoff series. The next day, she earned a state berth in pole vault with a PR and helped the 4x200 team advance to Austin.