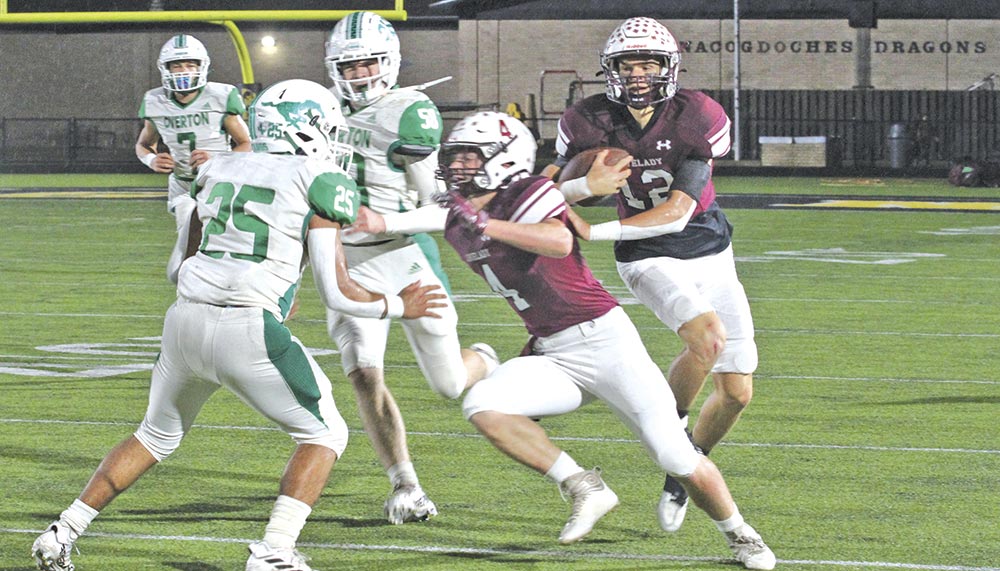 NACOGDOCHES — Lovelady's offense, defense and special teams all found their way into the end zone in dominating the Overton Mustangs 62-0 in the bi-district round on a cold, rainy Friday night.

Overton had first possession but was forced to punt on fourth-and long after tackles by Skylar Pipkin, Brandon Fry, Shaun Easterling and Landen LeBlanc.

Fry fielded the punt at the Mustang 42 and the Lions scored five plays later. Easterling carried three times for 41 yards and Dayvian Skinner picked up 10 on a run up the middle through a gaping hole created by linemen Erik Castillo, Terrelle Easterling, Ben Monk, center Tyler Gilchrist, Silas Strength and Fry.

Crawford sprinted 7 yards to the end zone, crossing the goal line at the pylon on the visitors side. Easterling ran the conversion to make it 8-0 at the 6:26 mark in the opening quarter.

Lovelady had to travel just 27 yards for its next score after the Mustangs coughed up the ball on the kickoff. A pride of Lions mobbed the return man and forced a fumble that was recovered by Skinner.

Easterling picked up 20 yards on first down and Skinner scored from 7 yards out. Another 2-point conversion by Easterling made it 16-0 with 5:31 on the clock.

An out-of-bounds Overton punt gave the Lions possession on their own 42.

Following an incomplete pass on first down, Pipkin picked up 11 but the Lions were assessed a 5-yard penalty. After the Mustangs held Skinner to a 1-yard gain, Jordan Blackmon cut right and back to the left for a 23-yarder to the Overton 35. After picking up 9 on the next play, Blackmon broke free outside to the 10 and made it to the 2 on the following play.

Cortavies Whitaker found his way around the right side for the touchdown, pushing the Lions' lead to 22-0 with :30 left in the quarter.
Lovelady's defense kept the pressure on Overton.

On a crucial third down play, Cody Davis hit the Overton back and flipped him in the air. Overton was forced to punt and Pipkin's return brought the ball out to the Mustang 48.

Easterling escaped for a powerful 43-yard run on the first play and Skinner pushed his way into the end zone from 5 yards outs. Blake Patrick carried in the conversion for a 30-0 cushion with 9:48 left in the half.

Lovelady's punt return unit put six more points on the scoreboard when Fry blocked a punt and Patrick recovered in the end zone for a 36-0 lead at the 5:31 mark. A conversion play was no good.

An 80-yard scoring drive put the Lions in control 42-0 at halftime.

The Lions started at their 20 after a punt return by Pipkin. Whitaker picked up 21 yards to the Lion 41 on the first play, Skinner gained 6 and Whitaker took it across midfield to the Overton 47. Another Skinner run netted 6 yards and Easterling reached the Mustang 28 after an incomplete pass.

Easterling connected with Jayton Crawford on a 28-yard TD strike with :44 left in the half. The PAT was no good.

An onside kick by Overton to start the second half was recovered by Gilchrist on the Lion 46. Whitaker carried five times for 42 yards and capped the drive from 9 yards out. Easterling also had a 3-yard run.

An interception by LeBlanc on the Mustang 44 provided another scoring opportunity. The Lion offense went to work and scored on the first play when Whitaker bolted 44 yards as time expired in the quarter.

The extra-point kick by Brady McCullough was good.

With Lovelady holding a 56-0 lead, the clock ran continuously in the fourth quarter.

With 4:20 left, Davis snared a Mustang pass and returned it for a pick-six. A two-point try failed.

Lovelady coach Will Kirchhoff was able to give many of his younger players some valuable experience as the clock ran non-stop.