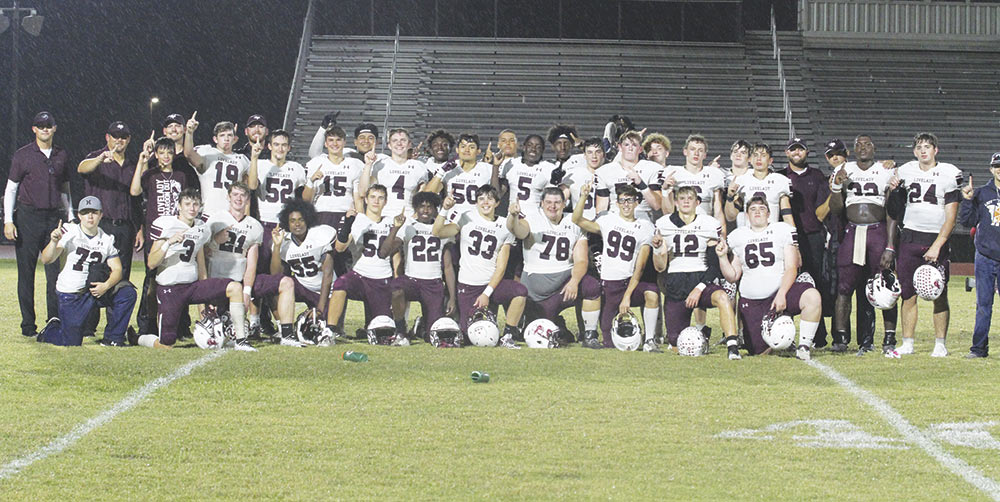 DEWEYVILLE — The District 12-2A DII championship came down to a classic smash-mouth battle between the undefeated Lovelady Lions and Deweyville Pirates in the final game.

Lovelady prevailed 28-14 Friday night and will head into post-season with a perfect district and season record of 9-0, 5-0.

After Dayvian Skinner boomed the opening kick to the end zone for a touchback, the Pirates scored 11 plays later on a 15-yard keeper by quarterback River Berry. An unsuccessful conversion play left Deweyville with a 6-0 lead at the 7:06 mark in the first period.

Cortavies Whitaker's 34-yard kickoff return to the Lion 49 was brought back to the 40 on a penalty.

Shaun Easterling was stopped for no gain on the first play but reached the Pirate 47 on the next play. Jordan Blackmon carried to the 13 and then to the 4 yard line.

On the next play, Jayton Crawford took the snap from Tyler Gilchrist and handed the ball to Easterling for the touchdown.

Easterling bulldozed his way across the goal line for the conversion to the put the Lions up 8-6 with 3:58 left in the quarter.

A turnover in the second quarter set up Lovelady's next score. With Deweyville threatening, Cody Davis forced a fumble and Brandon Fry recovered at the Lion 28.

Easterling threw to Skinner for nine yards and then carried to the Lion 45. A 7-yard run by Skinner moved the Lions across midfield to the Pirate 43 and Whitaker took it to the end zone on the next play.

Crawford took the snap as quarterback and handed off to Easterling for the conversion that put the Lions up 16-6 with 4:07 left in the second.

With only seconds left in the half and the Pirates threatening inside the 5 yard line, Crawford hit the quarterback and the ball popped out. Skylar Pipkin grabbed the ball in mid-air in the end zone and ran it out to the 7 yard line as the clock expired.

The Lions started their first possession of the second half at their 39 after a fair catch by Patrick on the kickoff. Blackmon carried four times for 43 yards and Easterling carried three times for 13 yards and capped the 10-play drive from 4 yards out. A two-point play came up short, leaving the Lions with a 22-6 lead at the 6:56 mark.

After a touchback on Skinner's kickoff, Deweyville put together a 13-play, 75-yard scoring drive.

As time expired in the third quarter, the Pirate quarterback scored on a 1-yard plunge and then carried the conversion to make it 22-14.

The Lions gave themselves some breathing room early in the fourth quarter after Crawford returned the kickoff to their 37.

The Pirate defense gave up just one yard on the first two plays and a long pass from Easterling to Fry was brought back to the Lion 38 on a penalty.

On the next play, Easterling dropped back to pass but couldn't find an open receiver. Under pressure from the Pirate defense, Easterling tucked the ball and scrambled, picking up blockers as he made his way down the field on the Lion sideline for a 62-yard touchdown. A conversion was no good, but a 14-point lead was plenty as the Lion defense kept Deweyville out of the end zone the rest of the night.