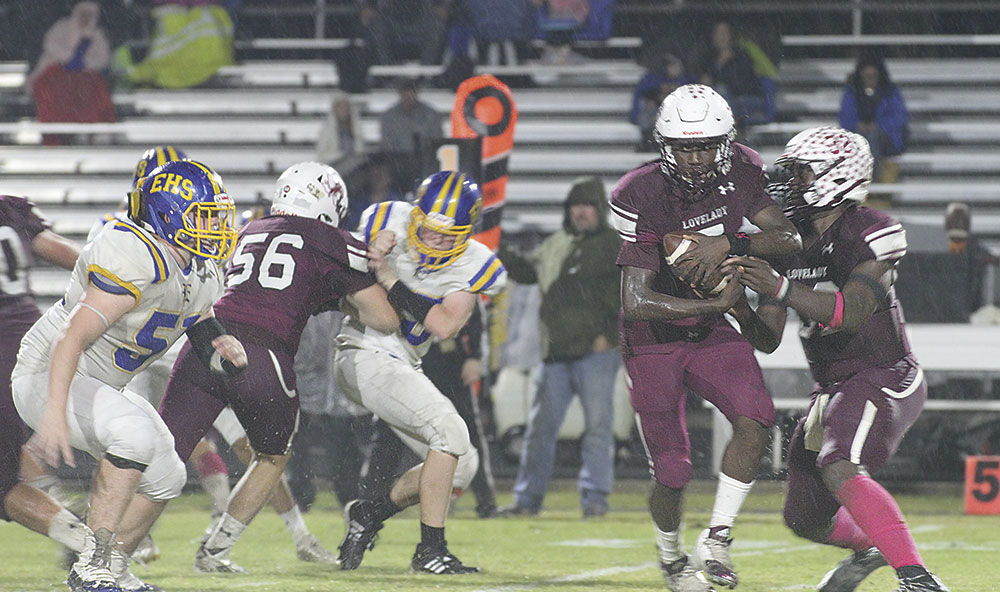 LOVELADY — Lovelady Lions recognized their senior players, named the 2022 Football Sweetheart and then got busy steam-rolling Evadale 69-6 on a rainy Friday night

The Lions scored less than two minutes into the game and had a 44-6 lead at the end of the first quarter. Three second quarter touchdowns stretched the lead to 63-6 at halftime.

The Lions got on the scoreboard at the 10:09 mark in the first quarter after taking over on a punt at the Rebel 37. Quarterback Shaun Easterling scored the first of his three touchdowns and Landen LeBlanc ran the conversion for an 8-0 lead.

After Cody Davis picked off a pass at the Evadale 25 and returned it to the 13, Dayvian Skinner carried to the 4 and Easterling scored on the next play. Easterling's conversion run made it 16-0 with 8:17 left.

Evadale got on the scoreboard on its next possession after a touchback on Skinner's kickoff. After a TFL by the Lion defense and an incompletion, the Rebels completed a pass and reached the 5-yard line before Brandon Fry made the tackle. Gary Pharr scored from three yards out to close the gap to 16-6 with 6:02 left in the first. A two-point play failed.

The Rebels' hopes of pulling off an upset quickly vanished as the Lions struck for four more touchdowns before the end of the quarter.

After LeBlanc returned a high kickoff to the Lion 48, Easterling went out of bounds at the Evadale 35 on a keeper and Skinner reached the 19 while dragging several Rebels with him. Easterling picked up two to the 17 yard line, and Skinner spun his way into the end zone on the next play. Jordan Blackmon scored the conversion for a 24-6 lead with 4:28 left.

A fumble recovery by Alvaro Gonzalez at the Lion 27 set up Lovelady's next score at the 2:48 mark. On the first play, Easterling cut left and then right all the way to the end zone. The PAT was no good.

The Lions only had to travel two yards after a long punt return by Skylar Pipkin. Jayton Crawford scored on a two-yard blast and Skinner tacked on the point-after for a 37-6 lead with 2:48 to go in the first quarter.

Lovelady's defense provided another score before the end of the quarter on a pick-six by Cody Davis for a 15-yard touchdown. Brayden McCullough's extra-point made it 44-6 with 2:36 left.

With Evadale threatening, Blake Patrick picked off a pass as time was running out in the first quarter and the Lions took over at their own 31. After Easterling gained five, Cortavies Whitaker picked up 11 and followed it up with a 53-yard TD scamper. McCullough's PAT made it 51-6 with 11:09 left in the half.

Evadale's next possession resulted in a punt that Pipkin returned for a touchdown only to have it brought back to the Rebel 23. Blackmon scored on the first play, putting the Lions up 57-6 with 9:02 in the clock. The PAT failed.

Davis picked off his third pass of the night and ran it back all the way but it was brought back to the 11 on a penalty. An 11-yard TD run by Blackmon made it 63-6 at the 3:42 mark. The PAT was no good.

With the clock running continuously in the second half, Lovelady punched in another touchdown in the fourth quarter with the backups getting some experience.
After Crawford called for a fair catch at the Rebel 42 on a punt, the Lions put together a seven-play, 58-yard scoring drive.