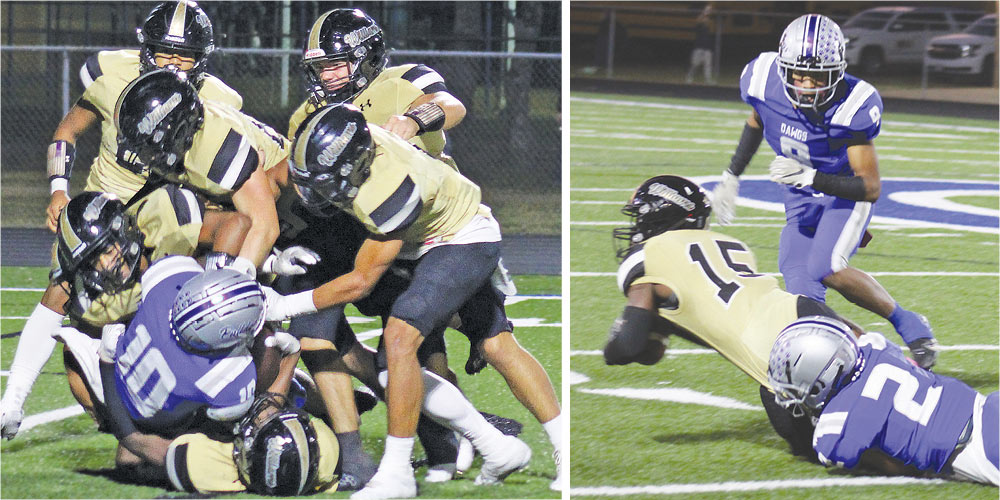 Woodville (7-2, 4-1) is idle this week before its district finale against Westwood on Nov. 4. Crockett (4-4, 1-3) travels to Westwood on Friday and hosts Diboll next week.

“It didn’t shake out the way we thought it would. The effort and basic fundamentals of the game were not there. We started off well and we felt good about our first two offensive and defensive possessions. But then we didn’t execute when we needed to,” said coach Alton Dixon. “The biggest thing was on a punt where we snapped the ball over the punter's head. That was the turning point for us and I think you could start to see it in our body language and in things that we did from that point on.”

Dixon said the back-breaker was when Woodville, leading 20-0, recovered the second half kickoff.

“We came out after halftime and it was a three-score game. They kicked it out of bounds two times so we were getting yards and the clock isn't moving. Then they kick it a third time and recover,” said Dixon. “That’s when the momentum shifted to them.”

The Eagles received the opening kickoff and coughed up the ball on the fourth play at their 41-yard line.

After forcing Crockett to punt, the Eagles took over at their 11 and converted two third-down situations before coming up short on a fourth-down play at the Bulldog 35-yard line.

The Eagles finally got on the scoreboard with 1:43 left in the opening period. Taking over at their 37 on a punt, the Eagles completed a 36-yard screen pass to Zayon Williams and Jatavian Taylor took it to the end zone from 27 yards out. Kicker Cole Standley, back in the lineup after Tommy John surgery, put the Eagles up 7-0.

The Bulldogs drove to the Eagle 34 on their next possession before turning the ball over on downs.

Late in the first half, a high snap on a Crockett punt gave Woodville the ball at the 16-yard line. Taylor carried to the 5 and Ralon Williams scored on the next play with the offensive line pushing him into the end zone. The PAT was no good, leaving the Eagles with a 13-0 lead at the 1:59 mark.

After kicking off, the Eagles padded their lead when Jacob Hyder picked off a pass on Crockett's first play and returned it 30 yards for a touchdown. Standley’s PAT gave Woodville a 20-0 advantage with 1:51 left in the half.

Crockett reached the Eagle 13 on its next series but an intentional grounding penalty and two quarterback sacks by Woodville preserved a 20-0 halftime lead.

After two second-half kickoffs by Woodville went out of bounds, the Eagles recovered a well-placed third attempt at the Bulldog 45. The Eagles didn’t waste any time striking on a first-down pass from Ralon Williams to a wide-open Christian Bean. The PAT was good for a 27-0 lead just nine seconds into the third quarter.

Crockett started its next series in a deep hole at the 3-yard line and picked up one first down before having to punt. The Eagles then drove to the Crockett 14, where they turned the ball over on downs.

Crockett’s misfortunes continued when Jacob Hyder recovered a fumble in the end zone. The PAT put the Eagles up 34-0 at the 7:24 mark in the third quarter.

Another fourth-down stop gave Woodville the ball at Crockett’s 42 and the Eagles stretched their lead to 41-0 with 11:12 left in the game. Taylor scored from five yards out and Standley tacked on the extra point.

After a long punt return by TyMarious Walker to the Bulldog 36, the Eagles drove to the 10 yard line before running out of steam. With 2:55 left, Standley booted a 27-yard field goal and the defense kept Crockett out of the end zone to preserve the shutout.

“There’s an outside chance (for us to get in the playoffs) but we have to win our last two and have some outside help,” said Dixon. “Right now, we have to focus and take care of business against Westwood."