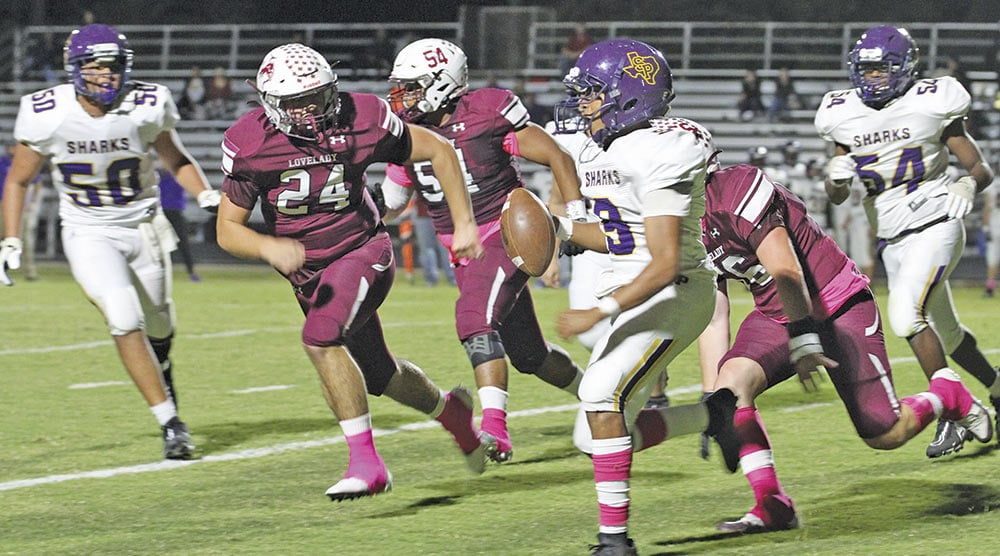 LOVELADY — Chalk up another blowout shutout for the boys in maroon.

The Lovelady Lions struck for four touchdowns in the first quarter and put 32 points on the scoreboard in the second quarter to rout the Sabine Pass Sharks 62-0 Friday night.

Since the clock ran non-stop in the second half, Sabine Pass fans were able to get a slightly earlier start on their 162-mile trip home.

The Lions took over at the Shark 42 and scored three plays later. Shaun Easterling carried to the 18 on the first play and Dayvian Skinner took it to the 4.

Easterling dropped back, looked left and connected with Skylar Pipkin for the touchdown. A conversion pass to Pipkin made it 8-0 at the 8:56 mark.

The Lions only had to travel 27 yards for their second touchdown after a 15-yard punt return by Crawford. Easterling carried to the Shark 3 and Cortavies Whitaker punched it into the end zone on the next play for a 14-0 lead with 6:12 in the first.

Lovelady's next scoring drive started at the Shark 40 after a punt. After a short gain by Whitaker and a penalty on the Lions, Skinner scored on a 33-yard run and Crawford caught a pass for the conversion that stretched the lead to 22-0 with 4:18 left.

LeBlanc and Erik Castillo applied defensive pressure that resulted in losses and forced yet another punt. Pipkin returned the punt and a penalty brought the ball back to the Shark 35. Jordan Blackmon picked up 31 yards to the 4 and then took it the rest of the way on the next play. Skinner ran the conversion to make it 30-0 with 1:46 left in the opening frame.

Lovelady's defense continued to bear down. LeBlanc made a tackle-for-loss, Alvaro Gonzalez pressured the quarterback and forced him to throw the ball away, and Blake Patrick broke up a pass on third down.

Sabine Pass punted out of bounds and the Lions took over at the Shark 46. After Blackmon picked up five on first down, the Lions turned a miscue into a touchdown on the first play of the second quarter. A lateral pass by Easterling hit the ground but Crawford scooped it up and zipped down the home sidelines for the TD. Skinner's kick made it 37-0.

Continued defensive pressure forced another punt that provided Lovelady another short field. TFLs by Pipkin and Brandon Fry, along with heavy pressure on the quarterback by Shupak and LeBlanc resulted in incompletions.

Taking over at the Shark 35 after the punt, Easterling hurdled several Sharks on the way to the end zone and Lovelady went up 43-0 with 9:45 in the second.

A fumble recovery by Fry at the Shark 12 set up another score less than two minutes later. Blackmon ran to the 3 and carried again on the next play to make it 50-0 with 8:12 on the clock.

Just 15 seconds later, Oscar Sutton scooped up a Shark fumble at the 20-yard line and ran it in for a touchdown. That made it 56-0 with 7:57 left in the half.

The Sharks continued to have trouble moving the ball as a pride of Lion defenders swarmed the ball on first down and Gonzalez sacked the quarterback on second down. An incomplete pass on the next play forced another punt and Crawford called for fair catch at the Shark 40.

Skinner carried up the middle to the 29, Blackmon reached the 20, Whitaker took it to the 16 and Alan Baskin ran to the 5. Skinner scored from 5 yards out on the next play, putting the Lions up 62-0 with :39 left in the half.