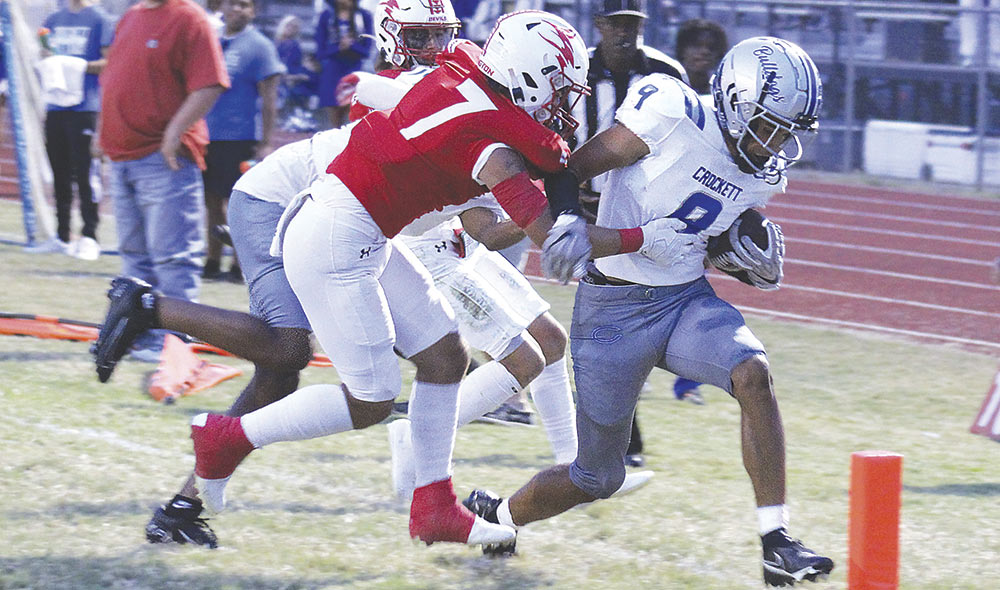 Crockett's Corey Simon crosses the goal line to put the Bulldogs on the scoreboard first in last week's 49-26 district win over Huntington.

HUNTINGTON -- The Crockett Bulldogs took care of business on the road and knocked off Huntington 49-26 in a crucial district contest Friday night.

The Bulldogs came into the game with their backs to the wall needing a 17-point margin of victory to keep their playoff hopes alive.

Leading just 28-26 late in the third, Crockett struck for three unanswered touchdowns to win by a 23-point margin.

The Bulldogs received the opening kick and struck on a 9-yard run by Corey Simon. The 70-yard drive included a 36-yard pass from quarterback Jadyn Collins to Devin Bedford and a 17-yard run by Collins. Angel Castillo tacked on the point-after for a 7-0 lead.

Huntington answered quickly with a three-play, 78-yard scoring drive, Quarterback Gabriel Lee fumbled on the first play but scooped up the ball and escaped for 58 yards to the Crockett 20. Quarterback Elijah Mansfield scored two plays later and kicker Connor Leach tied it up at 7-7 with 7:26 in the firstquarter.

The ping-pong match continued as Crockett answered right back a minute later with a three-play, 63-yard scoring drive. Collins broke a 36-yard keeper to the Devil 27 and Tywoin Delane carried for 9. Collins found Bedford wide-open in the end zone and Castillo gave the Dogs a 14-7 lead at the 6:26 mark.
After an interception by Simon at the 4-yard line, Crockett drove 96 yards to pay dirt. Collins broke a 44-yard run to the Devil 35 and then hit Bedford over the middle for the TD. Castillo's kick made it 21-7 with 1:53 left in the quarter.

Early in the second, Huntington stopped Crockett at the 32-yard line on fourth down and put together a 17-play, 68-yard scoring drive that consumed 7-1/2 minutes.

Crockett made it 28-14 with 2:11 before halftime. Taking over at their own 30 on the kickoff, Collins reeled off a 63-yard TD scamper and Castillo kicked the PAT.

The Devils received the second half kick and scored on a 13-yard pass to Mansfield with 8:02 in the third. The PAT was no good.

Huntington recovered a fumble on the kickoff at the Bulldog 48 and chewed up another four minutes on the way to the end zone. Mansfield scored from 6 yards out, cutting Crockett's lead to 28-26 with 4:17 left. A two-point conversion failed.

The Bulldogs took a 10-point lead on their next possession when Collins scored from 34 yards out and then carried the conversion to make it 36-26 with 3:15 left in the third.

Crockett put the game away with two more touchdowns in the fourth.

After taking over at midfield on a punt, Delane caught a 23-yarder from Collins and scored from 25 yards out with 9:18 left. The PAT was blocked but Castillo made the stop to prevent Huntington from returning it for two points.

Simon's second interception of the night provided another opportunity. Taking over at their own 29 after the turnover, the Bulldogs scored on a 40-yard scamper by Collins and Castillo nailed the PAT to give Crockett a 23-point lead with 1:04 left.

The Bulldogs rolled up a season-high 523 yards of total offense.

Collins completed 6 of 10 passes for 166 yards. Bedford had 5 receptions for 142 yards, including 2 touchdown catches, and Tywoin Delane had a 24-yard catch.

"Offensively, we played well when we had the ball, but Huntington clocked us before halftime with that 17-play scoring drive and early in the second half with 10 or 11 minutes of possession. In the third quarter I counted nine flags and six of those came on third and fourth downs, so it just ate the clock," said

Crockett head coach Alton Dixon. "We only had two possessions where didn't score-- one right before half and one in the third quarter."

The coach added, "We've got to be able to pull games out like that. Huntington is a tough place to play but at the end of the day I think we took control of what we could in the fourth quarter allowing us to pull away and open up the gap in the point spread."

Dixon noted that Huntington came out in a different offensive look than they had shown in previous games.