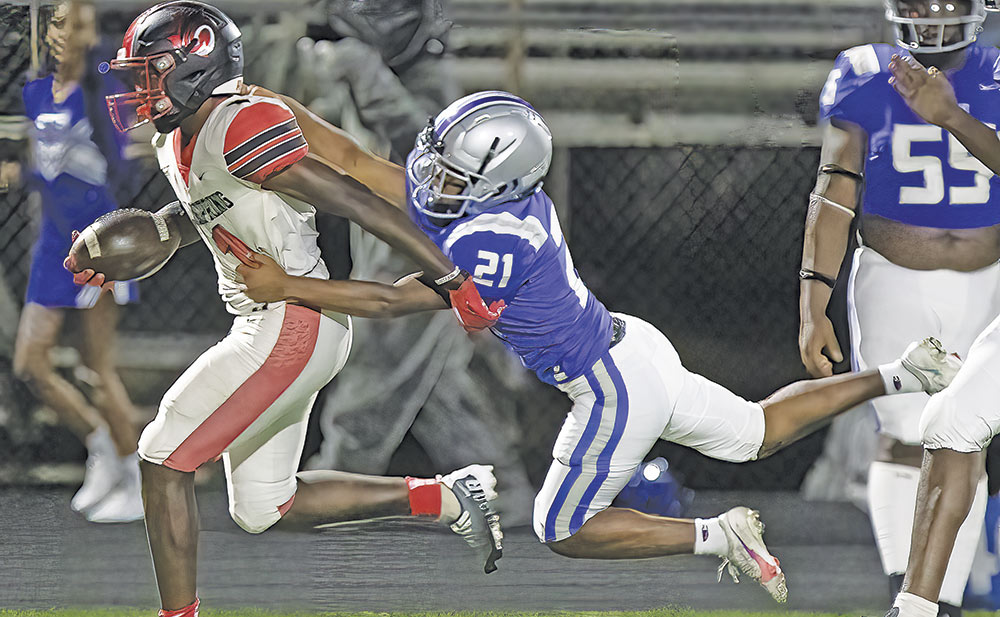 CROCKETT– Coldspring rode its ball control offense to a 42-30 district win over the Crockett Bulldogs on their homecoming night last Friday in Driskell Stadium.
The Bulldogs made it an eight-point game, 36-28, with 1:48 left but Coldspring scored a touchdown with :12 left to put the game away.

The Trojans improved to 2-0 in District 9-3A DI while Crockett slipped to 0-2.

The Bulldogs scored on their first offensive play when quarterback Jadyn Collins hit Devin Bedford over the middle for a 51-yard touchdown strike. Kicker Angel Castillo made it 7-0 just 14 seconds into the game.

On their second possession, the Bulldogs attempted a 35-yard field goal that was blocked.

Coldspring got on the scoreboard early in the second quarter on a 5-yard run by Tyga Parker. Quarterback Luke Monroe threw a conversion pass to Jamarion McGrowen to put the Trojans in front 8-7 with 8:00 left in the half.

After stopping Crockett on fourth down, Coldspring scored on a 67-yard run by Kelvin Harden on third-and-17. Parker carried for the conversion, putting the guests up 16-7 at the 3:46 mark in the second.

Crockett made it a two-point game on its next series. Collins picked up 23 on third-and-long and later hit Bedford for 17 to convert another third down. On the next play Collins found Bedford on a 23-yard TD strike and Castillo tacked on the PAT to make it 16-14 with 1:06 left.

A long kickoff return by Harden to Crockett's 30 put Coldspring right back in striking distance. Parker scored on a 1-yard plunge with :10 left in the half for a 22-14 lead. Crockett foiled a two-point conversion.

Coldspring went up 28-14 early in the third quarter when Parker broke a 43-yarder at the 10:04 mark. The conversion was no good.

Crockett made it a one-score game with 4:25 in the third. Facing third-and-seven at the Trojan 36, Collins lost the handle on a keeper but somehow got the ball back and strutted into the end zone. "He has a little contact as he makes that last break-away, the ball comes out and bounces right back to him," recalled Bulldog head coach Alton Dixon. "My heart skipped a beat right then, but that just shows you he's doing some things right."

Castillo nailed the extra-point to make it 28-21.

Coldspring stretched its lead with an 80-yard touchdown drive that chewed up 10-1/2 minutes of the third and fourth quarters.

Running back Tyga Parker scored from five yards out and the Trojans threw a conversion pass to Cody Everett for a 36-21 lead with 5:55 left in the game.

"They were just keeping our offense off the field and keeping our defense on the field. That's not a good situation for us," said Dixon. "If you break it down we had a handful of defensive plays on third downs where we get a penalty for what I would say is being too physical. Courtney (Byrd) was trying to make a tackle and he didn't hear a whistle and neither did us coaches. Then they scored on a long run (67 yards) on third-and-17. Those things were kind of back-breakers for us."

Crockett made it an 8-point game with 1:48 left with a 60-yard scoring drive. Collins hit Simon for 27 yards and had several carries himself. Tywoin Delane took it to the 1 yard line, setting up a TD by Collins on the next play. Castillo trimmed the lead to 36-28.

The Trojans recovered an onside kick and Parker broke a 48-yarder that set up a 2-yard TD by McGowen for a 42-28 lead with :12 left.
On the PAT, Crockett's Bryson Burton got a hand on the ball and Dylan Porter ran it back 104 yards for two points.

Coldspring picked up all but five of its 367 yards on the ground. Crockett used a balanced attack that produced 162 rushing yards and 158 passing yards for a total of 320 yards.

"Offensively, the biggest thing was we found a way to score quickly. That's something we normally do. We kind of take the strategy that Coldspring does. We want to run the football but we also aired the ball out some. Our offensive line played well and our backs did a great job in the pass protection," said Dixon.