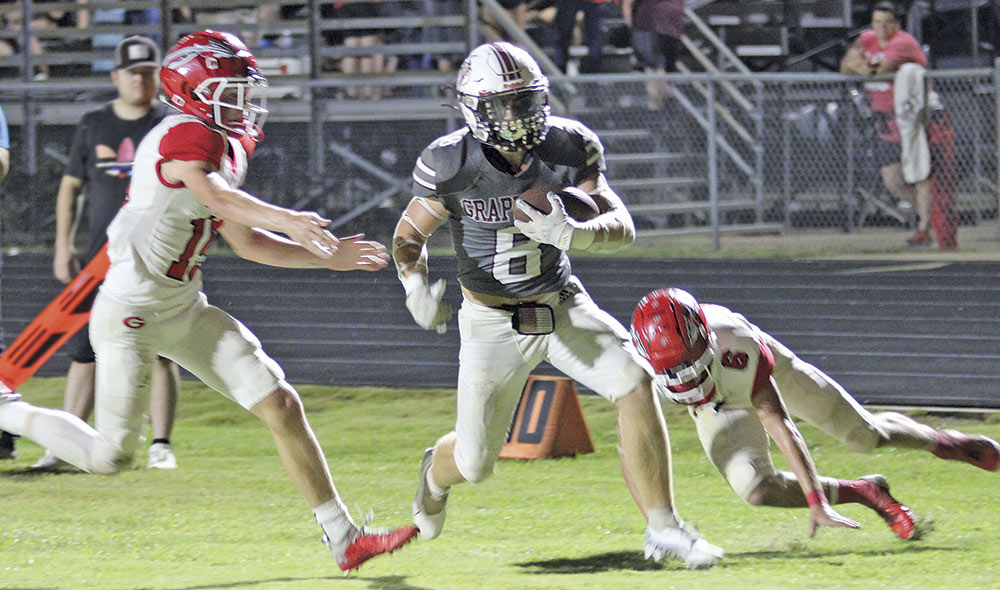 GRAPELAND– The Grapeland Sandies tasted their first victory of the season against Groveton, 44-26, in a game that was moved up to Thursday night due to a shortage of officials.

Grapeland only led 16-13 after a quarter and struck for two unanswered touchdowns in the second to pull away 30-13 at the half.

The Sandies (1-3) and Indians (1-3) matched each other's touchdowns in the third quarter. After Groveton made it 36-20 early in the third, the Sandies answered to go up by 16.

The Indians closed the gap to 10 on the first play of the fourth quarter, but Grapeland put the game away with a touchdown and conversion with 5 1/2 minutes left.

The Sandies will kick off their district campaign Friday on the road against top-ranked Timpson (4-0) while Groveton continues its non-district schedule at home with Alto (2-2).

Grapeland received the opening kick and scored on a 2-yard run by Trey Gilmore, who picked up 27 on the previous play. Quarterback

The Indians got on the scoreboard with a 22-yard pass from quarterback Ian Utz to Billy Thomas with 5:14 in the first. The kick was no good.

The Sandies stretched their lead when freshman Maleek Johnson caught a short screen from Lamb and took it 54 yards to pay dirt. Lamb threw to Omarian Wiley on the conversion for a 16-6 lead at the 4:24 mark.

After the kickoff, Groveton completed a 29-yard pass from Utz to Jarett Loftin for a first down at the Sandie 26 and an offside penalty on the next play moved the ball to the 16. Six plays later Groveton scored on fourth-and-goal when Utz hit 5-yard pass to Clifton Davis on the last play of the first quarter. Jackson Cathey tacked on the extra point to make it 16-13.

The Sandies flashed their big-play ability on their next series when Lamb hit Omarian Wiley over the top on a 46-yard strike to the 3-yard line. Johnson scored on the next play for a 22-13 edge with 9:31 left in the half. A two-point conversion failed.

Taking over on downs with 1:23 left in the half, Will Smith carried for 17 and Lamb threw to Vickers for a 47-yard gain to the Indian 9. Smith took it to the 1-yard line, but two penalties on the Sandies put the ball back at the 13. With :01 on the clock, the Sandies scored on a perfectly executed hook-and-lateral from Lamb to Wiley to Johnson for the TD. Gilmore delivered the two-point conversion for 30-13 lead.

Groveton received the second half kick and drove to the Sandie 29 before a turnover on downs.

The Indians forced a punt and took over at the Sandie 38. On third-and-long, Utz found Wyatt Snead over the middle on a 43-yard TD strike and Cathey nailed the PAT to make it 30-20 at the 7-minute mark in the third.

Grapeland countered with a 62-yard scoring drive that was capped by a 12-yard pass to Vickers. The conversion was no good, leaving the Sandies up 36-20 with 3:15 in the third.

The Indians made it a 10-point game on their next possession after converting on fourth-and-three. Utz connected with Snead for 16 yards and a personal foul penalty on the defense put Groveton at the Sandie 10. Another Utz-to-Snead pass on the first play of the fourth quarter capped the drive to make it 36-26. The conversion was no good.

The Sandies were able to chew up more than six minutes of the clock and stretch their lead.

The nine-play drive was highlighted by Johnson's 19-yard run to the Indian 20. On third down at the 17, Lamb tossed the ball to Vickers, who slipped two tackles on the way to the end zone. Lamb hit Johnson for the conversion, making the score 44-26 with 5:35 left.

After the kickoff Groveton turned the ball over when freshman Sean Walker intercepted a long pass at the Sandie 20.