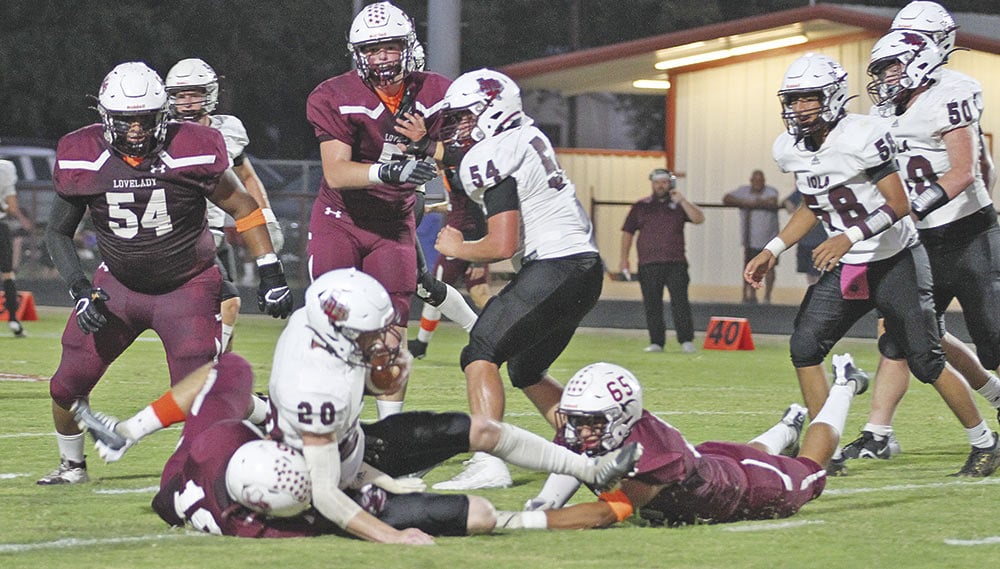 LOVELADY– The Lions Den proved to be a dangerous place for another Lovelady opponent Friday night.
Six first-half touchdowns propelled Lovelady to a 54-14 win over the Iola Bulldogs.

Iola returned Dayvian Skinner's opening kickoff to its 28. After a 15-yard pass on first down, Lovelady's defense dug in. Skinner, Shaun Easterling and Brandon Fry combined for two quarterback sacks to force a punt. Skylar Pipkin fielded the ball and was headed for the end zone, but a penalty on the Lions brought the ball back to the Iola 46.

Lovelady scored eight plays later when Skinner put his head down and powered across the goal line from the 2. Easterling went into the end zone standing up the two-point conversion to make it 8-0 with 6:16 on the clock,
The drive started with Easterling handing off to Skinner, who made a quick five yards before dragging a pack of Bulldogs to the Iola 35. After short runs by Jordan Blackmon and Skinner, Blackmon picked up eight to the 22 and Easterling reached the 11. An eight-yard run by Blackmon put the ball on the 3 yard line.

Defensive line pressure by Alvaro Gonzalez, Ben Monk and Fry forced an Iola punt that rolled dead at the Lion 23.

After Blackmon picked up four on first down and two plays later Easterling tossed a short pass over the top to Skinner, who went 73-yards for a touchdown. Jayton Crawford ran the conversion for a 16-0 lead with 4:13 on the clock.

Lovelady's defense continued to stand its ground. Jackson Jefferies stopped Iola at its 39 on the kickoff return and Fry set the Bulldogs for a loss on first down. Another sack by Gonzalez and Fry forced a punt that rolled at the 30.

After a five-yard loss, Easterling hit a gaping hole made by his offensive line and took it to the house on a 75-yard TD scamper. A two-point conversion pass failed, leaving the Lions with a 22-0 lead at the 1:10 mark.

Iola was forced to punt on its next series after Landen LeBlanc shut down a play for a big loss bringing up fourth-and-long. The Lions set up shop at their 36 after a short return by Jayton Crawford. Easterling carried four times for 27 yards and capped the drive from five yards out. Skinner had two carries for 22 yards and Crawford caught a 14-yard pass before being pushed out of bounds at the 5. A two-point conversion failed, leaving the score at 28-0 with 7:19 left in the half.

Another defensive stand resulted in an Iola punt to the Lion 36. Blackmon and Easterling carried for short gains to set up a 55-yard TD run by Cortavies Whitaker with 3:35 left. The PAT was no good.

Skinner's kickoff was fumbled by the Bulldogs and Alan Baskin recovered at the Iola 44.

Crawford carried for eight and Pipkin escaped for a 34-yarder that put the Lions inside the 2. Whitaker punched it in on the next play and Skinner tacked on the point-after for a 41-0 lead with 1:04 before halftime.

Crawford returned the second half kick from the goal line to the Lion 39. Lovelady drove down the field entirely on the running of Blackmon, who carried for 4, 9, 20, 4 and a powerful 28-yarder to the Iola 38. Blackmon capped the drive on a 1-yard blast to make it 47-0 with 8:08 in the third quarter.

Both of Iola's touchdowns in the second half were set up by fumble recoveries in Lion territory.

The Bulldogs got on the scoreboard with 4:41 left in the third quarter after a turnover on the Lion 31. Iola threw an end zone pass for the TD but a two-point conversion failed.

After Pipkin returned the kickoff to the Lion 35, Lovelady answered with a time-consuming scoring drive that chewed up the rest of the quarter and carried over to the fourth.

Blackmon gained 12 on first down and Alan Baskin took it the rest of the way. Baskin carried six times for 52 yards and then capped the drive from one yard out. Skinner's extra point made it 54-6 with 11:09 left.

Troy Shupak and Terrelle Easterling also contributed with great defensive plays that resulted in three-and-series by Iola most of the night.