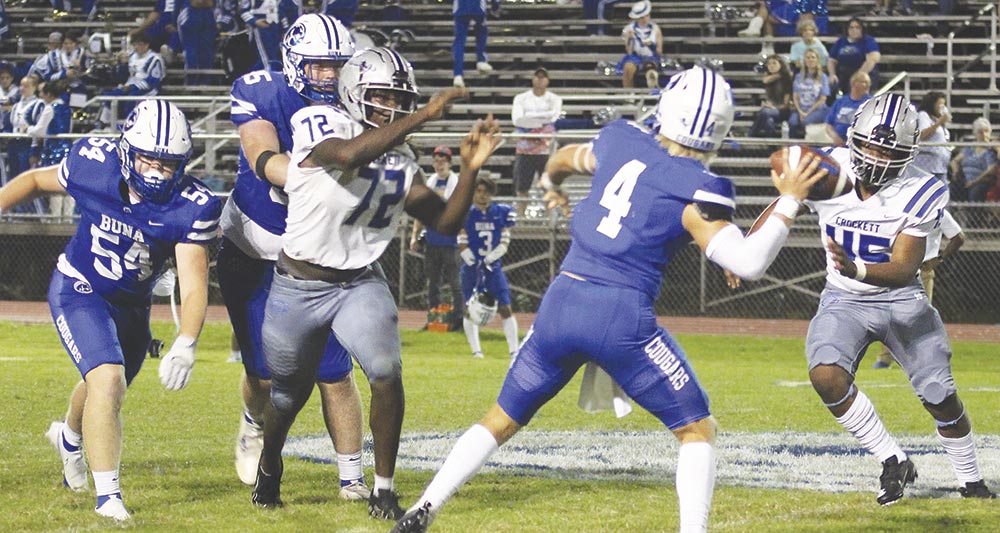 BUNA — Pivotal fourth quarter plays by the Crockett Bulldogs secured a hard-earned 21-20 win over the Buna Cougars on Friday night.

Buna (0-3) led 14-7 at halftime and was threatening to extend its lead late in the third when Crockett’s Ajani Ellis picked off a pass and returned it to midfield. Starting at their 36 after an unsportsmanlike conduct penalty, the Bulldogs later overcame a fourth-and-long situation when quarterback Jadyn Collins hit Tywoin Delane for 13 yards and a first down at the Buna 18. The goalward push continued and Collins scored on a five-yard run.

Crockett turned a botched PAT kick into a two-point conversion. Devin Bedford picked up the ball and threw to Zandric Anderson to put the Bulldogs in front 15-14 with 7:00 left in the game.

An interception by Bedford at Buna’s 49 provided another opportunity. Collins carried for 36 on the first play and an unsportsmanlike penalty on Buna put the ball at the 7. Collins finished the drive with a 1-yard plunge for a 21-14 lead with 4:30 left. A high snap on the PAT was recovered by kicker Angel Castillo.

Buna started its next possession at the 26 yard line and quickly moved to Crockett's 9 with a 59-yard pass from Toby Marse to Jacob Johnson, who later scored on a 1-yard blast to make it 21-20 with 2:33 left. Crockett’s Blake Jones nailed Johnson short of the end zone on the conversion to preserve a one-point lead.

The Bulldogs recovered a Buna pooch kick at their own 39 and had a chance to increase the lead after Tywoin Delane broke a 36-yard run to the 2 yard line, but they were content with running out the clock.

“Everybody says a game comes down to a handful of plays. That play by Blake Jones to stop Buna’s two-point conversion, us turning a botched extra point into a two-point conversion, and that pass from Jadyn to Tywoin on fourth down were three pivotal plays,” said Bulldog head coach Alton Dixon.

“I’m very proud of the kids. There was some adversity and some self-inflicted stuff, but all in all there were things that we have to clean up, especially on special teams, that could have cost us the game,” said Dixon in reference to a high snap on a punt and extra point. “It was a long bus ride but coming home with a victory made it bearable.”

The game was scoreless until the second quarter when Buna scored on a 10-yard run by Johnson. The Cougars kicked the PAT to lead 7-0 with 7:03 left.

Crockett answered right back on its next possession after Jahkeim McKnight escaped for a 50-yard run to the Buna 19. Delane carried to the 8 and Corey Simon picked up five to set up a three-yard TD by Collins. Castillo kicked the PAT to knot the score at 7-7 with 5:07 in the second.

Buna was forced to punt on its next series but got the ball back at the Crockett 39 when the ball touched a Bulldog. Buna scored on a seven-yard run by Johnson and tacked on the PAT for a 14-7 lead with just over two minutes left in the half.

The Bulldogs rolled up 412 total yards of offense while Buna finished with 264 yards.

Crockett completed 2 of 7 passes for 20 yards and picked up 392 on the ground.

Buna had a more balanced attack, picking up 130 yards rushing and 134 passing. Cougar quarterback Marse was 7 of 14 with two interceptions.

Collins' two receptions were a 13-yarder to Delane and a seven-yarder to Bedford.

Dixon said he was impressed with the leadership skills displayed by several players, especially his senior quarterback.
“When we were in the locker room at halftime several guys stood up and exhibited leadership. One was Jadyn, who talked about penalties, especially the self-inflicted penalties. He basically sounded like a coach and said everything I would say. He did a great job seeing the field, seeing the situation and addressing it. I’m very proud of that young man for taking that leadership role and how he’s owned it the entire time,” said Dixon.

Dixon described Collins as a “difference maker,” noting the crucial fourth-down play early in the fourth quarter. “Jadyn gets the ball out to Tywoin (Delane) on the edge for 13 yards and we get the first down,” he said.

“I’m very proud of the offense, but there are things we have to get cleaned up such as holding penalties, false starts, snaps and most importantly unsportsmanlike and personal fouls. That right there is a killer,” said Dixon.

“The game did get chippy but we must understand that it’s always the second person that gets called for the penalty. We looked at the video and we’re the second person. That’s not going to cut it. That’s something I’m disappointed in and we’re going to have a discussion about it today.”

Dixon noted the Bulldogs racked up 200 yards in penalties to Buna’s 120.