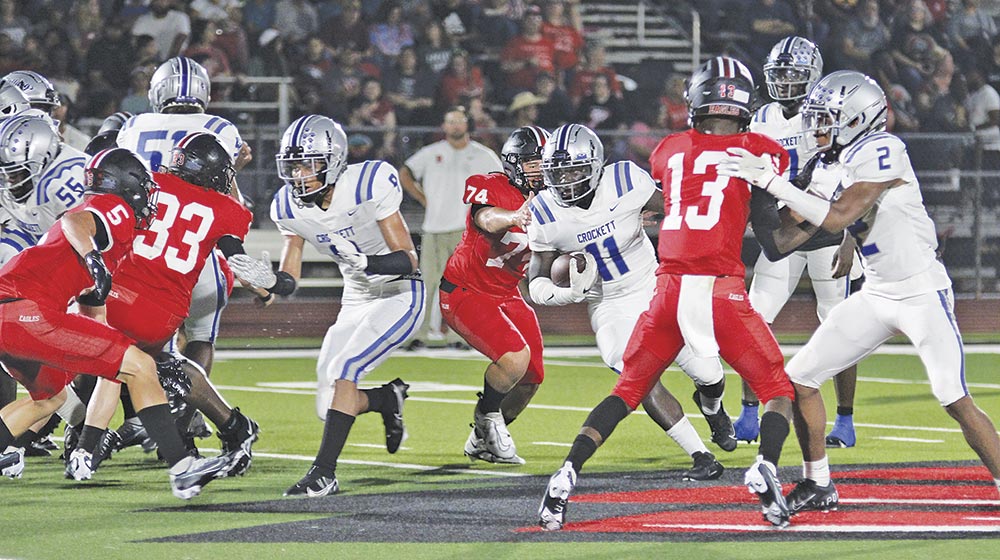 RUSK — The Crockett Bulldogs ran into a buzzsaw in the form of class 4A Rusk on Friday night.

The Bulldogs made it interesting when they scored on their first possession of the second half to make it 27-21. But the quick-striking Eagles stretched their lead to 47-21 in the third quarter and scored again on the first play of the fourth.

“Our most glaring problems were special teams and ultimately us not playing in rhythm as a football team," said Crockett head coach Alton Dixon. "We come out and get a defensive stop on Rusk's first possession. But our offense doesn't convert on third down and we have to punt. It happens again on our next two drives and we have to punt. We weren't in rhythm."

"We were struggling defensively giving up one-play and two-play scores, and those things just piled up on us,” said Dixon.
Rusk’s defense held the Crockett's offense to 247 total yards.

Tywoin Delane carried 12 times for 133 yards, an average of 11 yards, and Jahkeim McKnight picked up 17 yards on 4 carries, including 1 TD.

Collins, 2 of 8 in the passing department, threw a 20-yard TD strike to Devin Bedford.

Rusk threatened on its first possession but was stopped at the 11 yard line on fourth down. The Bulldogs went three-and-out but got the ball right back on an interception by Ajani Ellis. After another Crockett punt, Rusk scored on a 55-yard pass from McCown to Ward with 1:43 left in the first and tacked on the PAT.

Rusk recovered its own onside kick but was forced to punt and pinned the Bulldogs back inside their 1 yard line. Crockett was unable to dig out of the hole and an interception gave Rusk the ball at the 25 yard line.

A fourth-down defensive stand by Crockett at the 21 yard line energized the Bulldogs. Crockett marched down the field on the running of Collins, Delane and Corey Simon before going to the air for a 20-yard touchdown strike to Devin Bedford. Kicker Angel Castillo's PAT knotted the score at 7-7 with 6:11 in the half.

Rusk went back in front 14-7 on a 70-yard bullet from McCown to Brailen Trawick and PAT with 5:50 left.
Another onside kick by Rusk was recovered by Courtney Byrd but the Bulldogs again had to punt.

Taking over at their own 17, the quick-striking Eagles exploded when McCown hit Ward on the first play for an 83-yard touchdown. The conversion failed, leaving the Eagles with a 20-7 lead with 3:23 before halftime.

Crockett answered right back with a 77-yard scoring drive. Delane carried for 29, McKnight picked up 14 and Collins carried to the 24 yard line. Collins pitched to Delane for a 20-yard gain, setting up a 4-yard TD by McKnight. Castillo’s PAT made it 20-14 with 1:57 left.

"Us being down two scores is nothing in our minds because we know what can do defensively. We know what we can do offensively. We've shored up some things with our PATs. Our punts and kickoff returns are things we're going to get fixed. We critically have to get those things fixed,” said Dixon.

Crockett returned the second half kick and drove 55 yards to close the gap. Delane broke a 45-yard run to set up a 4-yard TD by Collins. Castillo closed the gap to 27-21 at the 9:58 mark in the third.

Rusk went up 33-21 on its next series when McCown reeled off a 51-yard keeper. Simon broke up a two-point conversion pass.

The Bulldogs mishandled a pooch kickoff and Rusk recovered at the Crockett 39. The Eagles scored on a 14-yard pass to Rojo, who kicked the PAT for a 40-21 lead with 6:41 in the third.

On Crockett’s next possession a low punt snap set up Rusk’s offense at the 10 yard line. Trowbridge scored from 6 yards out on the first play of the fourth quarter to stretch the lead to 53-21 with 11:54 left. The PAT was no good.

"I was pleased with our quarterback play, with our run defense and our ability to move and press the pile. There were things we did that were good. This a great lesson for our kids and we're moving forward," said Dixon.

"There was a little lingering of Week 1 into Week 2," Dixon said in reference to the Bulldog's upset win over Marlin.

"Nobody's going to lay down for us. Nobody's afraid of us. We're going to have to impose our will on people week in and week out on a consistent basis."

Among the linebackers, Zandric Anderson topped the tackle chart with 14 solo stops and 2 assists. Bryson Burton logged 4 assists and 3 tackles while Jonathan Lockhart had 3 solos and 3 assists.

Tristan McGraw had 2 solos and 2 assists along with a fumble recovery. Jim Carruthers had 1 tackle, 6 assists and 1 sack.