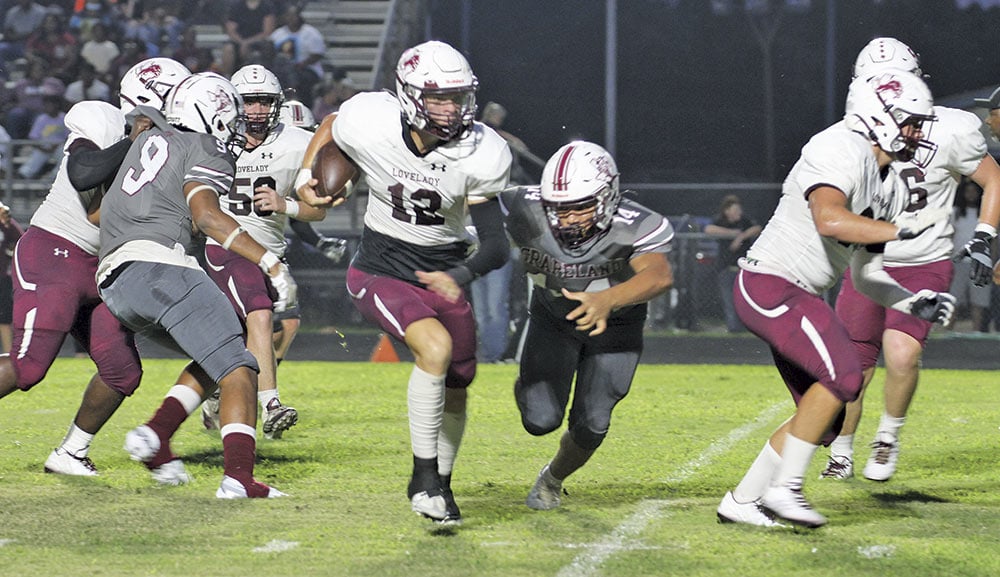 GRAPELAND — Lovelady rolled to 2-0 on the season with a 45-8 win over Grapeland Friday night in the first gridiron meeting in two years between the county rivals.

The Sandies got off to a shaky start when a high punt snap was quickly recovered by Lovelady's Landen LeBlanc at the 11 yard line.

Lion quarterback Shaun Easterling picked up eight on the first play and Dayvian Skinner stormed into the end zone from three yards out on the next play. Easterling ran the conversion to make it 8-0 with 10:06 on the clock.
Grapeland's next possession began at its own 44 after a short kickoff by Skinner. Quarterback Johnny Lamb handed off to Trey Gilmore for a short gain but two incompletions forced another punting situation.

After a high punt rolled dead at the Sandie 43, Jordan Blackmon carried to the 24 and Easterling reached the 14 before the defense stiffened. A six-yard sack and a penalty moved the Lions back five more to the 25.

Grapeland's Maleek Johnson nailed Easterling for a 10-yard loss to force a punt by Skylar Pipkin that went into the end zone for a touchback.

After a three-and-out series, a Grapeland punt rolled dead at the Sandie 47. Skinner started off with a 5 yard pickup and Easterling carried the next two plays for gains of 5 and 11 yards to the Sandie 26.

Pipkin made his way to the 9 yard line before being brought down by Grapeland defender Keavy Bruins. Blackmon ran to the 6, where Easterling dived across the goal line on the next play.

Blackmon ran the two-point conversion to put the Lions up 16-0 with :48 left in the quarter.

Another defensive stand by the Lions gave them an opportunity to extend their lead before halftime.

Jayton Crawford returned a Grapeland punt 15 yards to the Sandie 45, but a penalty on the Lions brought the ball back to their 47.

Lovelady struck quickly to take a 24-0 lead with :21 left in the half. Easterling picked up 14 on first down and then found Oscar Sutton on a 39-yard touchdown strike. Easterling carried for the two point conversion.

The Lions stretched their lead early in the second half with a seven play, 58-yard scoring drive.

Crawford fielded Grapeland's kickoff by Trinity Miller and returned it to the Lion 42. Skinner started the series with a 26-yard run aided by a down field block by Crawford before Grapeland defender Bruins made the stop. Easterling added 4 and then connected with Brandon Fry on a 14-yard toss that put the Lions at the 14.

After Skinner carried to the 11, Blackmon reached the 3 but was stopped at the line of scrimmage by the Sandies on the next play. Easterling capped the drive on a 3-yard blast and threw to Pipkin for the conversion that put the Lions up 32-0 with 8:20 left in the third.

In the fourth quarter, the Lions only had to travel 14 yards for their next touchdown after a Sandie punt went awry with a bad snap.

Cortavies Whitaker, who saw most of the action in the series, scored on a 6-yard run for a 38-0 lead with 9:31 left in the game. The extra point kick was no good. Whitaker had two runs for six yards and Alan Baskin picked up two yards.

Grapeland spoiled the Lions' shutout on its next possession with a two-play, 64-yard scoring drive.

The Sandies took over at their own 36 after a short kickoff by Skinner. Quarterback Johnny Lamb connected with Omarian Wiley for 28-yards on first down and the two seniors combined on the next play for a 36-yard TD strike. The Sandies successfully went for two points, closing the gap to 38-8 with 9:16 left.

After Whitaker returned the kickoff to the Lion 33 yard line, Lovelady only needed two plays to score. Baskin only managed two yards on the first play but the offensive line opened up a gaping hole on the next play.

Whitaker shot out of the back field and was off to the races for another TD. Skinner tacked on the extra point to make it 45-8 with 8:29 left.

Another Lovelady touchdown run by Baskin from 35 yards out was called back on a penalty.

The Lions defense was everywhere and gave up very few yards on the ground while also shutting down Grapeland's passing game.