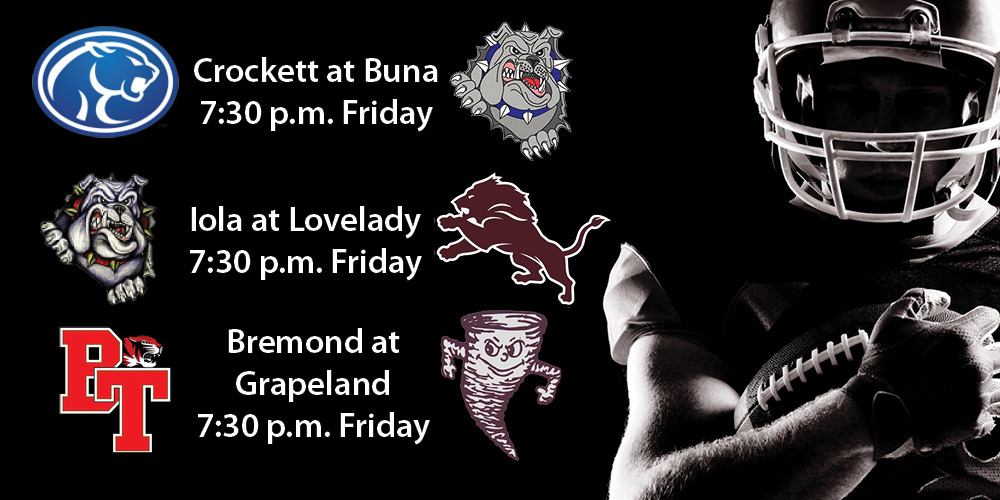 The Cougars had a chance to pull out a win late in the game against Bridge City. Facing fourth-and-24, Buna quarterback Toby Marse found Kaden Dill on a 23-yard toss to the Cardinal 21, but it was a yard short. Bridge City took over and ran out the clock.

The Cougars are picked fourth in District 10-3A DI, which includes Orangefield, Anahuac, East Chambers, Kirbyville, Hardin and Cleveland Tarkington.

Buna (2-9, 2-4) returned six starters on offense and nine on defense from a team that made the playoffs with only two district wins.

Jacob Johnson is Buna's top rusher while Kayden Dill and Landon Stephens are the primary receivers.

In sub-varsity action Thursday, the JV Dogs (1-1) will host Buna at 5:30 p.m. The junior high teams open the season on the road against Buna starting at 5 p.m.

The Lions (2-0) are gunning for their third straight win against the visiting Iola Bulldogs (1-1).

Iola opened the season with a 12-0 loss to Snook and broke into the win column last week by edging Normangee 43-22.

Lovelady has won the last two meetings with Iola by scores of 28-12 in 2020 and 15-6 in 2021.
Iola returned seven starters on both sides of the ball from a team that won just two district games.

Bremond comes into Sandie Stadium boasting a 2-0 record after dominating wins over Normangee 53-0 and Kerens 57-14.

This is the second of a three-game home stand for the Sandies (0-2), who close out non-district next week against Groveton.

Bremond, a class 2A DII squad, is blessed with eight returning starters on offense and nine on defense from a team that reached the regional semifinals and finished with a 6-7 record.

Quarterback Braylen Wortham returns after a strong freshman start and is picked Preseason Offensive MVP for District 13-2A DII.