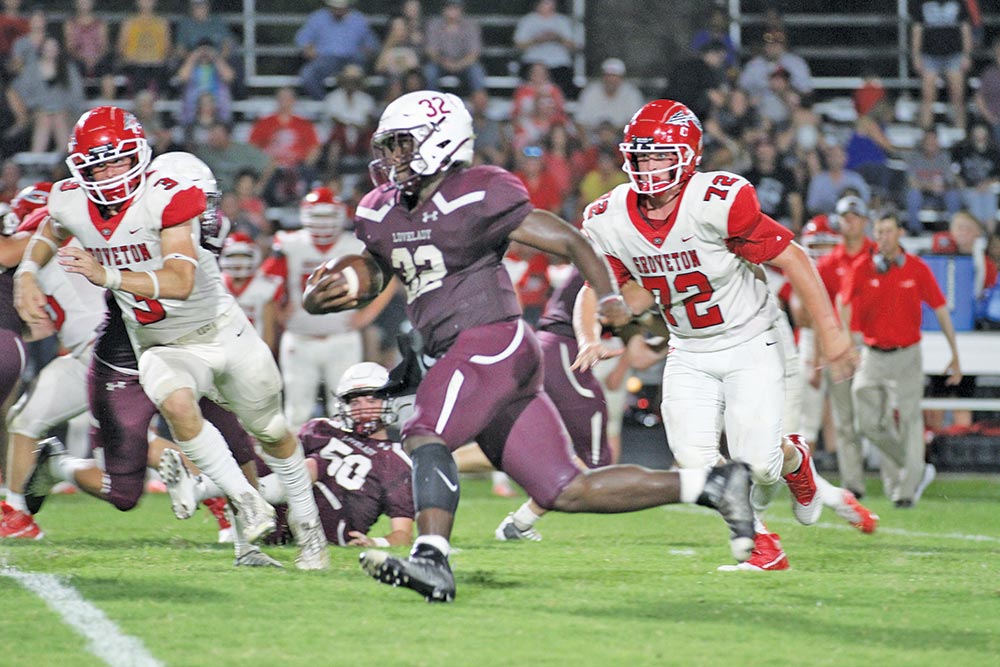 LOVELADY — The Lovelady Lions pulled away in the second half to beat the visiting Groveton Indians 28-7 and claim bragging rights in the long-running gridiron rivalry for the second straight year.

After forcing a punt on Groveton's first possession, the Lions struck on their third offensive play when quarterback Shaun Easterling scampered 68 yards to score the first touchdown on the new sod field in The Lions Den. Easterling's conversion run put the Lions up 8-0 at the 9:36 mark in the first quarter.

A miscue on a Lovelady punt late in the first quarter set up Groveton's only score. Punter Skylar Pipkin picked up a low snap and ran to the 21 yard line where Groveton took over.

Groveton scored early in the second quarter on a five-yard run by Darius McQueen on fourth-and-three. The Indians converted an earlier fourth down on a handoff from quarterback Ian Utz to McQueen, who picked up a first at the 6 before being stopped by Erik Castillo and Jordan Blackmon. After Brandon Fry shut down the next play for no gain, Utz picked up a yard to set up the TD run. Jackson Cathey kicked the extra point to make it 8-7 with 10:49 left.

Jayton Crawford returned the kickoff from the 22 to the Groveton 40. Blackmon and Skinner each carried for 3 and Easterling ran for 10 to the Lion 24. Blackmon picked up a yard and Skinner gained 2 before a mob of defenders stopped him at the 21 yard line. With the entire offensive line of Terrelle Easterling, Silas Strength, center Tyler Gilchrist, Ben Monk and Erik Castillo providing solid blocking, Easterling took the snap and made his way to the end zone behind the lead block of Blackmon. The conversion play failed and the Lions led 14-7 with 7:24 left in the half.

A big hit by Cody Davis forced Groveton to punt on its next possession. After the ball rolled dead at the Lion 35, Lovelady drove down the field and scored on a 9-yard run by Dayvian Skinner, who broke a tackle and dived into the end zone with :42 left in the half. The two-point conversion failed, leaving the Lions with a 20-7 halftime lead.

The eight-play drive included two carries by Blackmon for five yards, two carries by Easterling for 11 yards and a seven-yarder by Skinner. Crawford caught a pass for 12 yards and Pipkin had a 29-yarder.

Early in the third quarter, the Lions extended their lead after forcing a fumble and recovering at the Groveton 14. Easterling scored on the first play to make it 26-7 with 9:01 left in the third, Another two-point conversion was no good.

Late in the third quarter, Groveton made a goal line stand to hold the Lions at 1 yard line on fourth-and-goal.

The Indians took over but the Lovelady's Landen LeBlanc sacked the quarterback in the end zone for safety with :03 left in the quarter. Skinner, Terrence Easterling, Strength and Blackmon also provided defensive pressure on the play.

Late in the game Pipkin picked off a Groveton pass and the Lions took a knee to end the game.