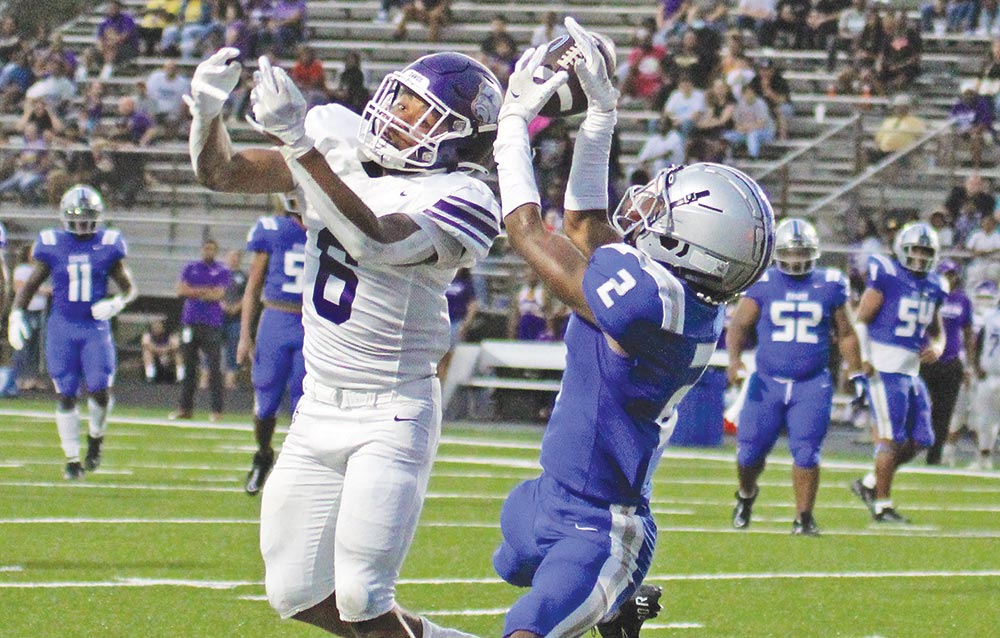 Crockett receiver Dylan Porter hauls in a pass under tight coverage during the Bulldogs' 48-31 victory over Marlin. Photo by Larry Lamb

Crockett and Rusk are both riding momentum from impressive opening week victories.

The Eagles cruised past Fairfield 35-3 on the road while the Bulldogs upended Marlin 48-31 at home.
Rusk, a class 4A DII squad, is picked to finish third in its district which is headed up by No. 1 ranked Carthage, the projected state champion.

Wide receiver Aiden McCown, a senior, moved to quarterback this year, replacing his older brother at that position. "Aiden is really good. He does some things in the pocket with his feet, he knows how to extend the play, step up into the pocket and he has the ability to break down and see coverage really well. He knows where he's going with the ball," said Dixon. "It's a lot different when you grow up with a dad who's a professional football player."

The McCowns' father, Josh McCown, is a former NFL quarterback and now a member of the Rusk coaching staff.
"Rusk has really good receivers in Bryce Grimes and Chad McCuin," said Dixon. Grimes, a senior, and McCuin, a sophomore, are both key defensive players.

Sophomore Spencer Barnett is the spark plug in Rusk's running game. "He's a sneaky, fast kid. He does a lot of good things in pass protection and running the ball,"said Dixon. Barnett turned heads last season as a freshman on defense with 35 tackles and three interceptions.

Rusk boasts size in the offensive line. "They're really big and move really well. It's going to be a challenge for us.

"Rusk is a well-rounded football team so we've got our hands full offensively and defensively," added Dixon.

"Defensively they have an odd front. They do a lot of things with their safeties that can make things difficult for you in the run game and pass game. They do a good job of sifting through coverages and they play really hard. It's going to be a real test for us because of the way they play and good they are playing that defense. It's going to be challenge. There are lot of things we don't know that we've got to learn.

Rusk carries 38 players on its varsity roster, which is 10 more than Crockett. "They have a platoon of kids and good experience with a big bunch of seniors and juniors."

The Eagles squad consists of 20 seniors, 12 juniors and six sophomores.

Rusk's depth was a factor last year in Crockett's 47-21 loss.

The Bulldogs had a 21-20 lead late in the first half but couldn't keep pace with the Eagles as fatigue began to set in. Rusk scored twice before halftime and added a pair touchdowns in the third.

Lovelady and Grapeland are rekindling their long-running football rivalry after a two-year hiatus.

The 2022 Houston County Class 2A championship will be decided Friday night in Sandie Stadium. Kickoff is 7:30 p.m.

Lovelady handily defeated Groveton 28-7 in its opener while the Sandies lost a heartbreaker to Frankston 24-22 on the road.

The county rivals last faced off during the 2018 and 2019 seasons when they were in the same football district. Grapeland won both of those contests 53-16 and 26-20.

The Sandies and Lions haven't played the past two seasons since they went their separate ways, so fans are excited about the gridiron reunion.

Any time Grapeland and Lovelady face off in any sport, fans can expect a playoff-caliber atmosphere. The two schools are in different football districts but compete in the same districts for some of the other sports.