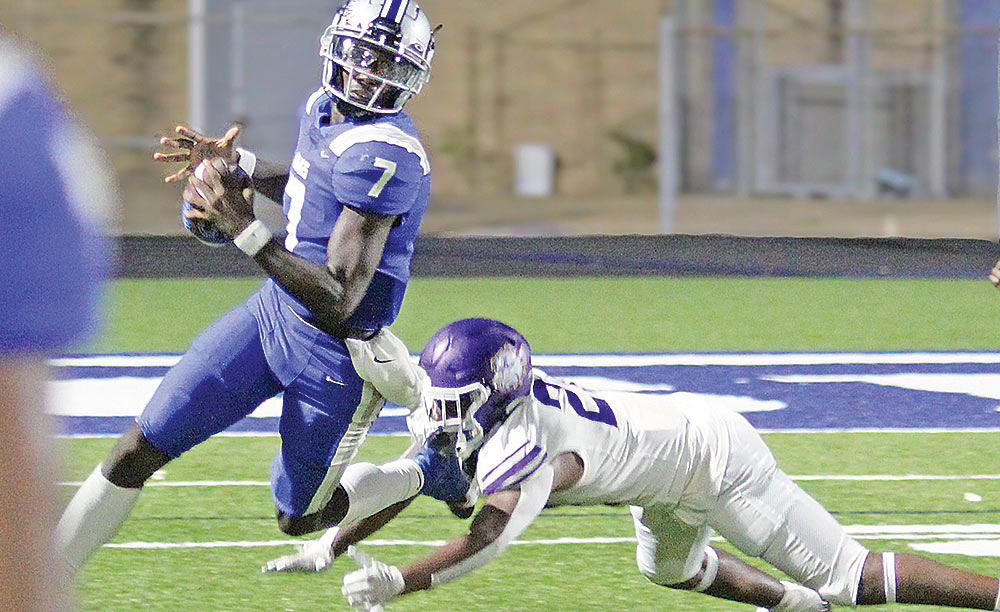 CROCKETT – The Crockett Bulldogs took control in the second half to upend highly ranked Marlin 48-31 in their season opener Friday night.

Marlin came to town boasting a No. 4 ranking in class 2A DI and were heavily favored to win the matchup.
Trailing 25-20 at halftime and 31-26 at the end of the third, Crockett struck for three fourth quarter touchdowns and the defense pitched a shutout to put Marlin away.

“The biggest thing was having the right mindset coming out in the second half. We took control right away and imposed our will in the run game," said head coach Alton Dixon. "Our offensive line did a great job moving the line of scrimmage forward and the backs did a good job of the basic things we work on every day. You could actually see the drill work that we do come to life."

Dixon added, “Defensively, it was our pursuit and our relentlessness, It was just the mindset of the whole team.”
The Bulldogs rolled up 196 yards through the air and 178 on the ground for a total of 374 yards.

Quarterback Jadyn Collins competed 10 of 13 passes for 196 yards. Collins threw one touchdown pass and had no interceptions. In addition to passing, Collins carried for 32 yards and ran for an 11-yard touchdown.

“Jadyn is a great leader and he made some great plays. He had a few turnovers but his ability to work through adversity, his ownership and way of calming his teammates down was really big. His leadership kept us going," said

"We had 374 total yards and our goal is to get to 400 yards. We were close but you take away some of those turnovers, some bad snaps and things like that we’ll hit our goal,” said Dixon. “My hat’s off to Coach Torres and

Marlin for being such a good football team. It was a really tough, physical and fast game.”
The Bulldogs fumbled five times and lost two. Three extra-point kicks were blocked. Crockett blocked two kicks and Marlin blocked one.

“Devin (Bedford) came in defensively and started covering No. 0 (Trajon Butler). That gave us an opportunity to take away some of their screen game just because Devin is quicker and faster. He can play out in space and that was a big deal. He was one of those unsung heroes,” said Dixon. “All in all, we shut them out in the second half. We gave up the punt return for a touchdown but Marlin did not score on offense in the second half.

After receiving the opening kick, Crockett’s offense got off to a shaky when a high snap on the first play pinned the Bulldogs back to their own 4 yard line. Unable to dig out of the hole, Crockett punted and Marlin’s Zha’mauryon Lofton returned it to the 13 yard line. Marlin scored three plays later on a 4-yard pass from quarterback Desmond Woodson to Trajon Butler. Kicker Ezekiel Chavez made it 7-0 at the 8:49 mark.

A lost fumble thwarted Crockett’s second series but the men in blue got the ball back when Tristen McGraw recovered a fumble and returned it 14 yards to the 45.

Crockett’s offense scored 10 plays later when Delane plowed into the end zone from the 1 yard line with :58 left in the first. Marlin blocked the PAT to preserve its 7-6 lead.

Marlin answered with a nine-play, 68-yard scoring drive. Woodson hit Lofton on a 30-yard strike to the 12 yard line and capped the drive on a 10-yard keeper with 9:21 left in the half. A blocked extra point kick held Marlin to a 13-6 lead..

The Bulldogs closed the gap with an 82-yard scoring drive. Facing fourth-and-13 at the Marlin 27, Collins threw a sideline pass to Porter, who managed to keep one foot in bounds for a first down at the 11. On the next play Bedford broke several tackles to set up a 2-yard touchdown blast by Delane. A failed two-point conversion left Marlin in front 13-12 with 4:54 left in the half.

Marlin increased it lead to 19-12 with 2:00 on the clock when Woodson scored on a 9-yard keeper. Anderson blocked the extra point and Simon recovered.

Crockett slipped in front 20-19 with a 65-yard drive consisting of four passes. Porter hauled in a 21-yarder, Bedford had an 11-yarder and Delane had a 6-yarder to set up a 34-yard TD strike to Simon, who took the ball away from the defender. Collins ran for the conversion to put Crockett in front 20-19 with 1:11 left.

Marlin struck quickly to regain the lead with :29 left on a 44-yard pass to Butler Marlin went for two but Jim Carruthers sacked the quarterback to keep the Bulldogs within five, 25-20, at halftime.

Early in the third quarter Crockett put together an 80-yard TD drive. Collins hit a wide-open Bedford on a 45-yard pass and Delane scored from 11 yards out with 6:29 left. The PAT kick was low.

Marlin went back in front 31-26 when Zha’mauryon Lofton slipped a tackle and returned a punt 56 yards with 1:46 left in the third. Crockett shut down the conversion.

Early in the fourth, Crockett had a touchdown pass called back and turned the ball over on a fumble at the Marlin 20.
The Bulldogs got the ball back at the 12 yard line when Delane a blocked a punt but gave the ball right back on a fumble on their first play.

After a low snap on a Marlin punt gave Crockett possession at the 9 yard line, Collins scored from 11 yards out to nudge the Dogs in front 32-31 with 4:50 left. Another two-point play came up short.

An interception and 34-yard return by Simon set up Crockett’s next scoring opportunity at the Marlin 31 yard line. Delane carried the next two plays and scored from the 22 with 3:06 left. Collins strutted into the end zone untouched for the conversion that put the Dogs up 40-31 lead.

The Bulldogs took over on downs at the Marlin 28 and scored on two runs by Delane up the middle. Delane carried on the conversion to put Crockett up by 17 with 1:37 left.

Crockett’s defense continued to flex its muscle and forced a turnover on downs at the Marlin 35 with :58 left.