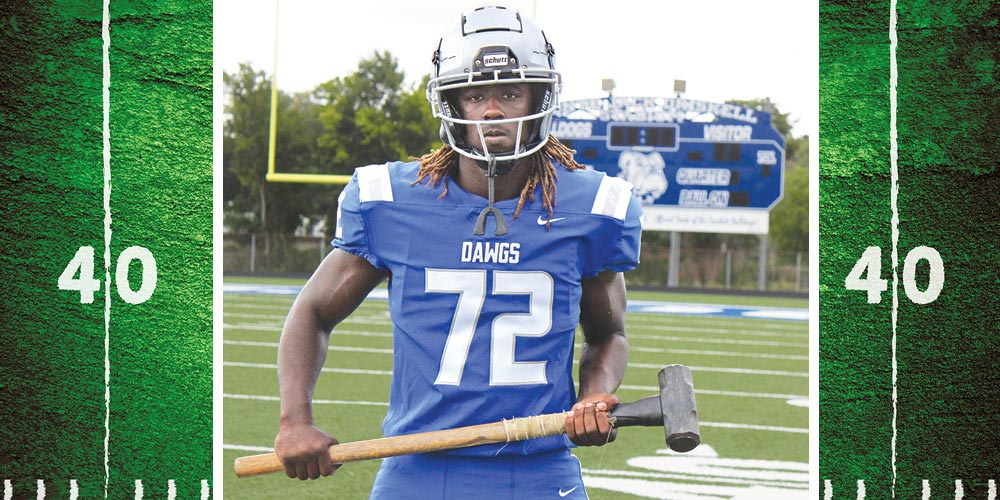 With their season openers just days away, Houston County's three high school football teams are busy ironing out the wrinkles.
Crockett and Lovelady will enjoy home field advantage while Grapeland starts the season on the road Friday.
Here's a look at this week's matchups:

Marlin rolls into town boasting a No. 4 state ranking in Class 2A DI by Dave Campbell's Texas Football magazine.

DCTF notes Marlin emerged as a new force in Region II last year, bursting onto the scene and reaching the class 2A DI state semifinals.
In its preseason outlook, DCTF adds, “The scary part is that they're mostly back and more experienced."

Marlin has eight returning starters on offense and nine on defense from a team that posted an 11-4 record.

Senior wide out Derion Gullette (6-3, 230) was featured as the magazine's class 2A coverboy. Gullette logged 1,458 yards receiving and 14 touchdowns. He also had 150 yards rushing and five touchdowns. On defense, he contributed with 125 tackles.

Marlin quarterback Desmond Woodson threw for 3,636 yards and 38 touchdowns during his sophomore season.

"They have a mindset of winning and they know how to win. They're very fast, very explosive, physical and very well-coached. Their kids know what they're doing and play together," said Crockett head coach Alton Dixon.

"They're going to use their speed to their advantage. It's a challenge all over the field whether it be offense or defense," said Dixon.
Crockett's final scrimmage with Malakoff last Thursday was canceled due to lightning, so the Bulldogs missed an opportunity to see how they would stack up against a No. 7 ranked squad.

This week's game in Driskell Stadium will be the first game played under newly installed LED field lights. "It's more focused on the field and much brighter than the old ones and the new system also has a ball tracker," said Dixon.

Marlin is not fielding a junior varsity, so the JV Bulldogs will travel to Cushing on Thursday for a 5 p.m. contest.

After this week, the Bulldogs will play back-to-back road games against Rusk on Sept. 2 and Buna on Sept. 9. Groesbeck comes to town Sept. 16 for the non-district finale.

Coach Will Kirchhoff likes the idea of starting the season with a match-up that provides a playoff atmosphere and the Lovelady-Groveton rivalry always delivers.
“It's always a great game,” said Kirchhoff. “We want every game before we get to district to be as close to a playoff atmosphere as we can get. What makes the Groveton game so unique here is that it's such a big rivalry and it goes back and forth."

“Groveton has a historic program obviously and their kids play very hard. They're going to give you a good look. Scheduling Groveton for Week 1, in my opinion, makes two-a-days better and makes your scrimmages better. There's no waiting to get better. There's a sense of urgency about fixing the problems we might have.

“This is a big game for our community and it's big for our kids. It's always a heck of a ball game, so coming out of the gate against Groveton provides the playoff atmosphere that we're trying to experience. Our ultimate goal is to win a lot of playoff games and have a shot at the state title. I don't believe in waiting for that moment so we'll go ahead and put it Week 1 and get after it. It'll be a good one,” said Kirchhoff.

Next week, the Lions will rekindle a long-running series with county rival Grapeland on the road.

After Iola comes to town Sept. 9, the Lions have back-to-back road games against Normangee on Sept. 16 and Leon on Sept. 23. Lovelady has a bye week before hosting Colmesneil on Oct. 7 for the district opener and homecoming game.

Grapeland kicks off its season on the road against Frankston, a class 2A DI squad.

The Indians finished fourth in their district last year but had the misfortune of running into Timpson in bi-district.

Frankston (5-6, 3-3) is again picked fourth in district with seven returning starters on both sides of the ball.