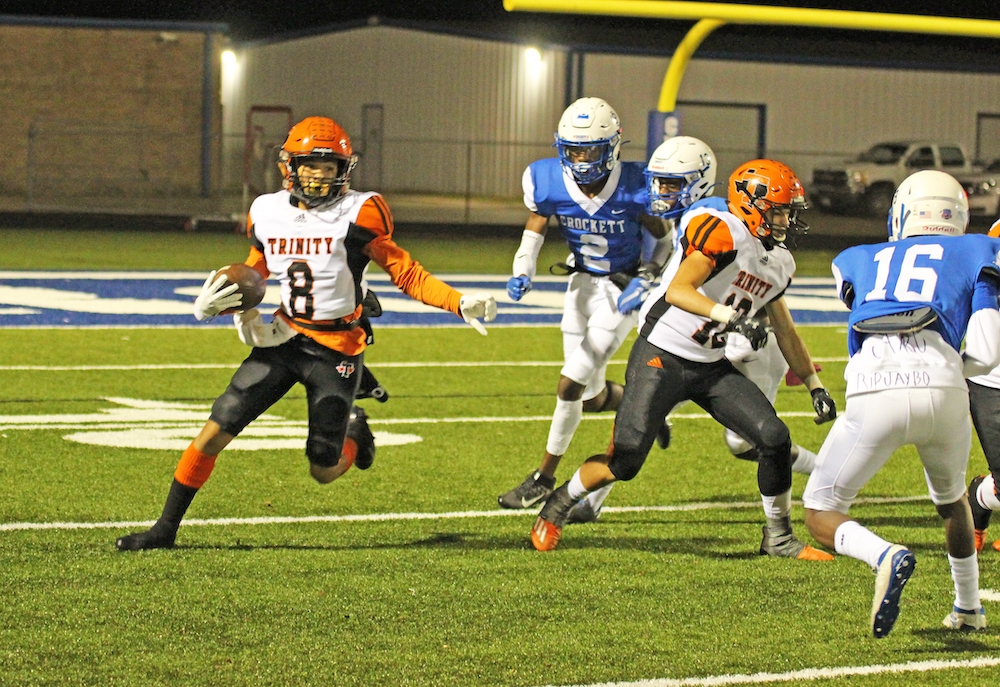 The Crockett Bulldogs can breathe a little easier heading into the first round of the state football playoffs.

Crockett plays District 10-3A runner-up Anahuac in bi-district while fourth-place Trinity faces No. 8 ranked East Chambers, the District 10-3A champion.

The Crockett-Anahuac matchup will be played Friday, Nov. 13 at 7 p.m. in Woodville’s Eagle Stadium.

In other key district matchups Friday, Coldspring defeated Diboll 20-12 to capture the District 9-3A title and will play Woodville Thursday night in Crockett’s Driskell Stadium at 7 p.m. Woodville defeated Anahuac 27-22 but Anahuac took second based on a tiebreaker.

Crockett’s first touchdown against Trinity was courtesy of the defense.

A pick-six by sophomore Zandric Anderson on Trinity’s fourth play got the ball rolling and kicker Antonio Cruz put the Bulldogs up 7-0 with 10:51 in the first quarter.

Anderson foiled Trinity’s second possession when he recovered a fumble at the Tiger 35. The Bulldogs scored three plays later on a 36-yard pass from sophomore quarterback Jadyn Collins to senior Ty White. Cruz, who was perfect on extra points, made it 14-0 at the 8:58 mark.

After an interception by Keshun Easterling near midfield, the Bulldogs drove to the Tiger 12 before coughing up the ball. 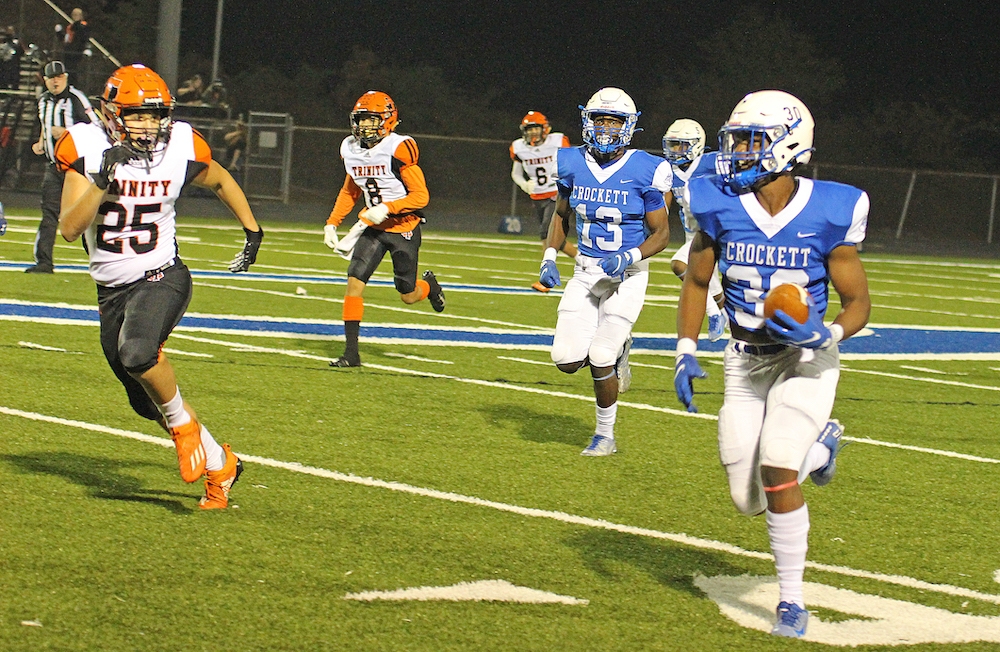 PHOTO BY LARRY LAMB Crockett’s Zandric Anderson returns an interception for a touchdown against Trinity in a showdown for third place in District 9-3A DI Friday night.

Unable to move the ball, Trinity was forced to punt and a high snap sailed out of the end zone for a safety to give Crockett a 16-0 lead with 4:16 left in the first quarter.

Another interception by Easterling set up Crockett’s next touchdown. The junior snared the pass and returned it to the Tiger 48, but a penalty moved the Bulldogs back to their 35 yard line. Collins hit White for a 15-yard gain and found Randy Jones on a pinpoint 44-yard touchdown pass two plays later. The PAT put Crockett up 23-0 at the 11:00 mark in the second quarter.

Crockett only had to travel 22 yards for its next touchdown after forcing Trinity to punt from the 10 yard line. Dennis Simmons picked up 18 yards to set up a four-yard blast by Easterling for a 30-0 lead at the 8:51 mark.

Late in the first half Trinity reached the Bulldog 27 yard line on the running of junior fullback Andrew Crabtree before turning the ball over on downs.

Crockett marched down the field but was unable to punch the ball in before fumbling at the Tiger 5 with :42 left in the half.

After Jones returned the second half kickoff to the Crockett 17, the quick-striking Bulldogs extended their lead when Easterling took it to the house on an 83-yard run on first down just 21 seconds into the third quarter.

Another high snap on a Trinity punt resulted in a safety that put Crockett up 39-0 with 7:46 to go in the third quarter.

Crockett attempted an unsuccessful field goal from the 29 yard line on its next series.

Trinity mounted a deep threat in the fourth quarter behind the running of Crabtree but ran out of steam at the 9 yard line.

Crockett will also host a Class 4A bi-district game between Jasper and China Spring on Friday at 7:30 p.m.