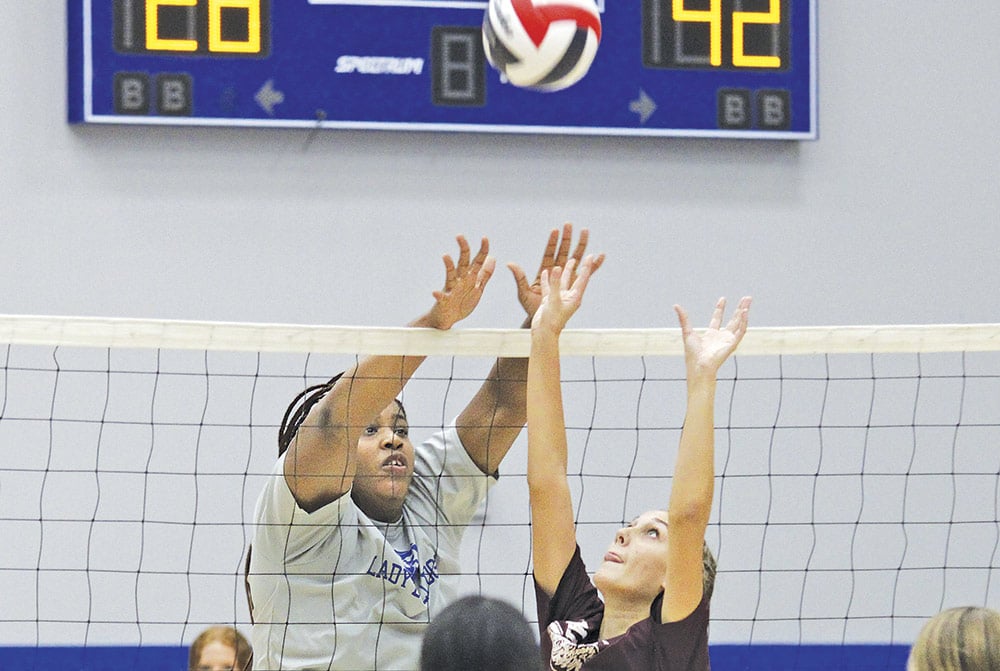 Crockett and Grapeland players battle at the net during a volleyball scrimmage Saturday at the The Hop in Crockett. Coldspring and Rusk also participated in the four-team scrimmage. Photo by Larry Lamb

With just a week of practices and a few scrimmage matches under their belts, Houston County volleyballers are hitting the courts this week for their first official action of the 2022 season.

Crockett, under new head coach Marla Hust, opened the season at Kennard on Tuesday and will be idle until its next match on Aug. 16 at Goodrich. The Lady Dogs travel to Apple Springs on Aug. 19 and the varsity squad will compete in the Groveton Tournament on Aug. 18 and 20.

The Lady Dogs will finally make their home debut on Aug. 23 when Elkhart comes to town. They will close out pre-district play at home against Latexo on Aug. 30 and Groveton on Sept. 6.

Crockett will compete in a new district this year and only has about a month to prepare for its District 23-3A opener against Coldspring on Sept. 9 in The Hop.

Rounding out the eight-team district are Onalaska, New Waverly, Cleveland Tarkington, Trinity, Anderson-Shiro and Shepherd, which is dropping from class 4A. The same district lineup will be in effect for girls and boys basketball.

All three of the county's class 2A schools are in the same volleyball district this year.

Lovelady, Latexo and Grapeland are in District 23-2A along with Groveton, Colmesneil and Corrigan-Camden, which is down from class 3A.

Lovelady, the defending district champion with a 13-0 record, won the bi-district title before losing to Leon in the second round. Groveton finished as district runner-up, Latexo was third and Colmesneil fourth.

Corrigan-Camden was runner-up in its former 3A district. Grapeland has been competing in a different district for several years and is looking to break a two-year playoff drought after winning a district crown in 2019.

District play doesn't start until Sept. 20, so the three local teams will have plenty of time to work out any kinks.

With new head coach Haleigh Blount at the helm, Lovelady opened the season at Cayuga on Tuesday before two straight home games against class 3A Diboll on Friday and 3A Franklin on Tuesday, Aug. 16. The Lady Lions hit the road Aug. 18-20 for their first tournament appearance at Jewett Leon.

Lovelady rounds out its August schedule at home with Neches on Aug. 23, a tourney appearance at Warren on Aug. 25-27 and a trip to Buffalo on Aug. 30.

Next week, the Lady Tigers will make their home debut Aug. 16 in a dual match with Trinity and Onalaska. They travel to Trinity on Aug. 19, host Buffalo on Aug. 23 and compete in the Anderson tourney Aug. 25-27. Latexo wraps up its August schedule with a short trip to Crockett on Aug. 30.

The rest of Grapeland's schedule for August includes a home match with Oakwood on Aug. 23 and the Anderson-Shiro tourney on Aug. 25 and 27. Grapeland closes out the month with a trip to Cross Roads on Aug. 30.

Kennard, the lone class 1A team in the county, is in a new district this year with Neches, Leverett's Chapel and Apple Springs.

Coach Tori Alverson returns to lead the Lady Tigers, who were eliminated in the second round of the playoffs last season.

The Lady Tigers opened the season at home with Crockett on Tuesday and will compete in the Cross Roads tourney Thursday and Saturday.

Next week, Kennard travels to Tenaha on Tuesday before making its second tourney appearance at Leon on Aug. 18-20.