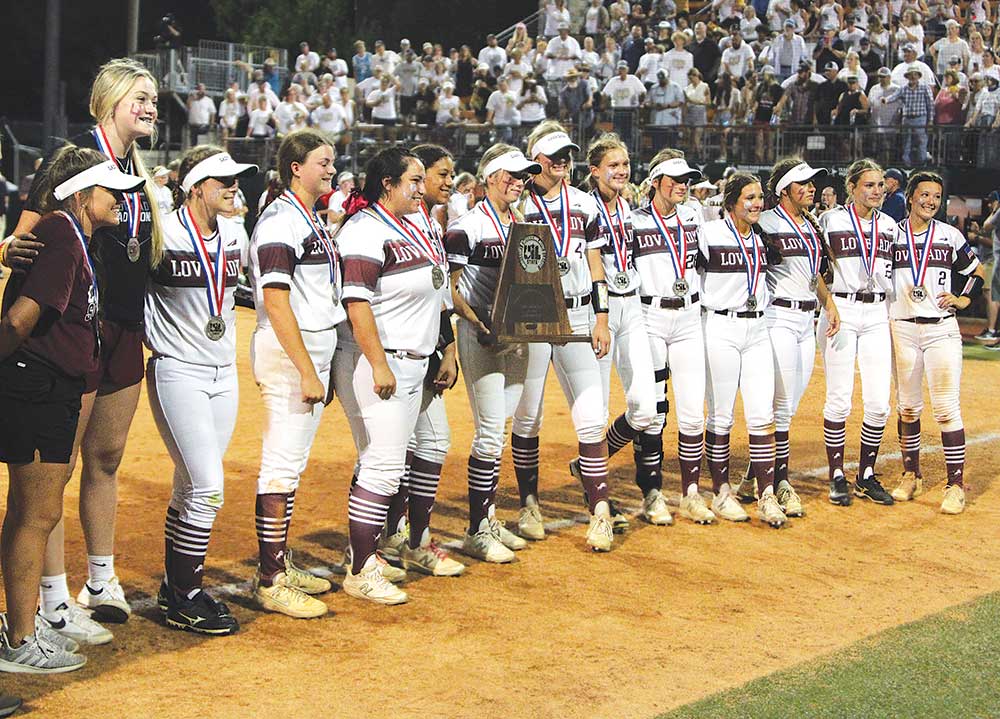 AUSTIN — The new kids on the block made their presence known at the UIL State Softball Championships.

The Lovelady Lady Lions (35-5-2) came home with the Class 2A State Runner-up trophy in their debut on the big stage at McCombs Field.

Lovelady knocked off defending state champion Stamford 1-0 in the semifinals Tuesday night but was unable to topple top-ranked Crawford in the championship game Wednesday night.

Crawford, the 2021 state runner-up, defeated the Lady Lions 3-0 to claim its fourth state crown in six state appearances.
Crawford won its semifinal game 1-0 over Weimar, which made its ninth trip to state.

With the game-time temperature registering 95 degrees, the Lovelady-Stamford match-up was a scoreless stalemate until the bottom of the sixth. Mihyia Davis led off with a bunt single, stole second and went to third when Scout Lovell hit a single to the shortstop and stole second.

With one out, Haven Prager reached on a fielder’s choice bunt and advanced to second on a fielding error by the first baseman that allowed Davis to score.

With Lovell at third, Linda Martinez reached on a fielder’s choice, Prager advanced to third and Lovell was thrown out at home for out two. A strike-out ended the threat, but one run was all the Lady Lions needed to secure the win and advance to the championship game.

The Lady Lions fended off Stamford in the top of the seventh after a two-out single.

Macie LaRue struck out the first batter and the second popped up to Prager at first base.

With Stamford down to its final out, a single provided a glimmer of hope but the next batter grounded out to seal a 1-0 Lovelady victory.

As you’d expect, the statistics for both teams were even in a few categories. Each team had five hits and each left five runners on base. Stamford committed one error while Lovelady was perfect in the field.

LaRue (22-1) recorded the complete game victory in the circle. She allowed five hits and zero runs with six strikeouts and no walks.

Stamford pitcher Citlaly Gutierrez (18-5) gave up one run on five hits while striking out 11 and walking none.

Davis and Lovell both hit 2-for-3 while Martinez was 1-for-3.

Scoring in each of the first three innings, the Lady Pirates rode a shut-out performance in the circle by junior Kenzie Jones, who was named Championship Game MVP on the 2A State All-Tournament Team.

Crawford scored in the first frame when Jones singled to right center field after a two-out double by Kylie Ray.

In the second inning, Crawford used small ball to push across its second run after a leadoff single by Haley Holmes, who advanced to second and third on sacrifice bunts. With two outs, the next batter was hit by pitch and Holmes came home when the following batter reached on an error.

Taylor Gohlke put Crawford up 3-0 in the third when she laced a double to left center field to drive in pinch runner Kymbree Larance after Jones reached on a single.

The Lady Lions left four runners on base while Crawford stranded six.

Despite collecting two hits in the sixth, the Lady Lions were unable to spark a rally. Lovell drilled a one-out single down the left field line but was caught stealing second. Womack followed with a single but Jones struck out the next batter to snuff out the threat.

LaRue (22-2) gave up three runs on seven hits with seven strikeouts and no walks.