KILGORE — The Kennard Tigers are headed to the UIL state baseball tournament for the second straight year.

After blasting Union Hill 10-0 behind pitcher Dylan Cole's perfect game Thursday, Kennard fell victim to a 5-4 walk-off on Friday that forced a deciding third game for the

Region III championship.
With the season on the line Saturday night, the Tigers responded with a convincing 16-4 blowout to secure a berth in the UIL Class 1A State Tournament in Round Rock next week.

Union Hill took a 1-0 lead in the first inning but its hopes quickly faded away as Kennard scored five in the first, three in the second, four in the third and four in the fourth for a 16-2 lead. 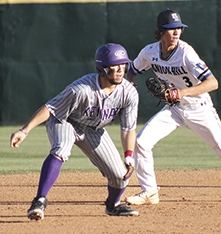 Kennard's Elijah Dowdy gets a big lead off second in Game 2 against Union Hill last Friday. Photo by Larry LambThe Tigers held Union Hill to two runs in the top of the fifth to end the game under the 10-run rule.

Kennard set the tone early. By the end of the first inning the Tigers had scored five runs on five hits and three walks.

The Tigers scored on a double by Elijah Dowdy and singles by Cole and Ryan Pilkington, who scored on a dropped third strike. Caleb Alfred singled, stole second and scored from third on a passed ball to make it 5-1.

Cole led off the second with a single, stole second and scored on a single by Keyton Lumbreraz. Lumbreraz came home on a line-drive triple by Pilkington, who scored on an error by the shortstop for an 8-1 lead.

The Tigers continued to pound away in third and extended their lead to 12-1.

Union Hill mounted a threat in the fourth after loading the bases. A wild pitch allowed one run to score but Pilkington struck out the next two batters.

Kennard didn't let up in the fourth.

After leadoff batter Nick Dowdy was hit by pitch and Kulms doubled, Elijah Dowdy's hard ground ball single made it 14-2. With two outs after Pilkington reached on catcher's interference, another hard grounder by Alfred brought in Kennard's final two runs.

With bases loaded and two outs in the fifth, Union Hill pushed across two runs on a line drive single to left field. The next batter grounded out and the Tigers began their celebration.

Cole notched the pitching win, allowing three hits and one run while striking out four and walking one in 2 2/3 innings. Pilkington and Lumbreraz helped to close out the game in relief.

Pilkington worked 1 1/3 innings, allowing one hit and one run with three strikeouts and one walk. Lumbreraz gave up two runs on three hits, one strikeout and one walk in one inning.

The Tigers ran wild on the base paths with eight stolen bases. Cole led with three and Alfred had two. 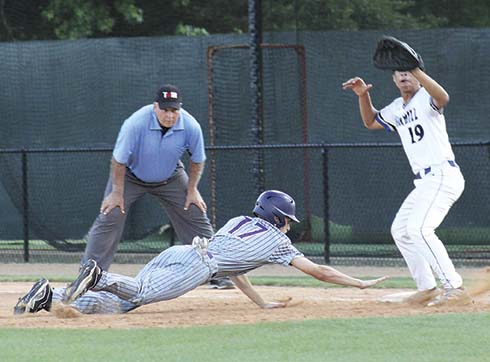 Kennard's Nick Dowdy dives back to second on a pick-off throw during Game 2 against Union Hill. Photo by Larry LambGame 2
Union Hill 5, Kennard 4

A walk-off lifted Union Hill to a 5-4 victory Friday night to thwart a series sweep by the Tigers.

With the game tied at four in the bottom of the seventh, the Bulldogs pushed across the game-winning run on a sacrifice bunt.

After three scoreless innings Kennard went up 1-0 in the fourth when Cole singled, stole second and third, and scored on an error.

The Bulldogs loaded the bases in their half of the fourth and tied the game on a passed ball. Kulms, the starting pitcher, struck out the next two batters to end the threat.

A three-run uprising by the Bulldogs opened up a 4-1 lead in the fifth.

Union Hill scored a go-ahead run on an error and scored two more on a sac fly and another error. Pilkington took the mound with one out and ended the threat with a strikeout.

The Tigers evened the score with three runs in the sixth. Elijah Dowdy led off with a double, went to third on a ground out by Lumbreraz and scored on a single by Cole.

Cole stole second, advanced to third on a passed ball and came home on a sacrifice by Pilkington.

Alfred walked, stole second and scored the tying run on a grounder by Montero.

Both teams were hampered by miscues defensively. Union Hill had four errors and Kennard had three.

Cole had three stolen bases and Alfred had one.

Kulms started on the hill and went 4 1/3 innings. He allowed two runs on zero hits, struck out five and walked seven. Pilkington worked 2 1/3 innings in relief and gave up three runs on three hits with three strikeouts and no walks.

Cole pitched a perfect game, the bats were hot and the defense played flawlessly in the series opener Thursday night.

Cole gave up no hits, no runs and no walks while striking out 12 batters over five innings.

Union Hill committed three errors in the field while the Tigers were perfect.

Kennard grabbed a 3-0 lead in the bottom of the first. After Kulms walked and Elijah Dowdy was hit by pitch, Cole swung at the first pitch he saw and crushed a line drive triple to bring in two runs. Cole scored on a passed ball.

In the second, Elijah Dowdy hit a two-out single, advanced to second on a wild pitch and went to third on a passed ball. Dowdy scored on another wild pitch to make it 4-0.

Alfred’s leadoff triple sparked a six-run frenzy in the third. After Alfred scored on a ground out by Montero, Nick Farmer walked and Nick Dowdy hit a bunt single. Kulms drove in two runs and later scored from third on a wild pitch to give the Tigers a 7-0 cushion.

With bases loaded after back-to-back walks by Elijah Dowdy and Lumbreraz, Kulms scored on a sacrifice fly to left field by Cole.

E. Dowdy stole home and Lumbreraz scored on an error by the catcher after stealing second and third for a 10-0 lead.

Cole sealed the victory in the fifth by striking out the side. He struck out two batters on six pitches and sat down another on four pitches to end the game.

Alfred, 2-for-3, and Cole, 1-for-1, both collected triples. Cole finished the night with three RBI.