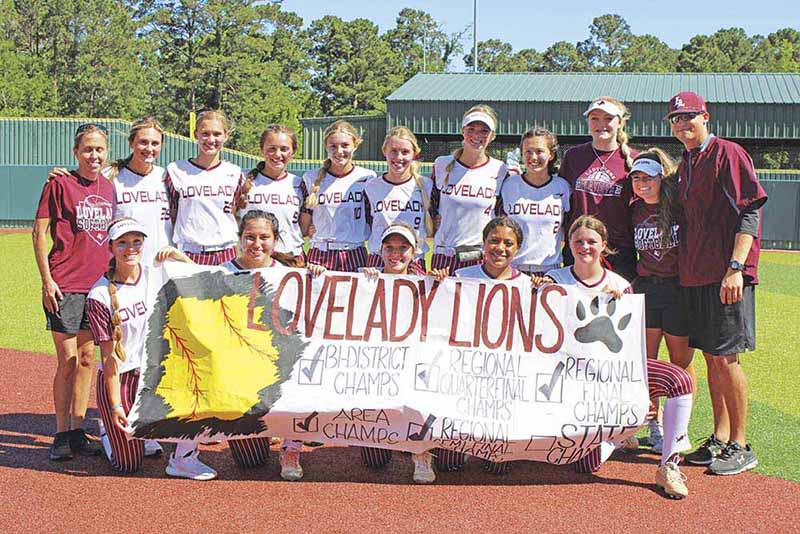 Only one box remains unchecked on the Lady Lions' playoff banner after they captured the regional championship Friday, leaving them just two wins away from the state championship. Photo by Larry Lamb

RUSK — Lovelady has been knocking on the door to the state softball tournament for several years now and has finally broken through.

The Lady Lions swept Groveton in a regional final series to become the first softball team in school history to reach the Final Four.

After winning the series opener 5-0 on Thursday night, Lovelady (34-4-2) clinched the Class 2A Region III championship by winning 11-2 on Friday afternoon.

The Lady Lions' historic season continued Tuesday night in Austin with a state semifinal match-up against Stamford (26-4). Crawford (27-2) and Weimar (31-6) are pitted in the semifinals at 4 p.m.

The winners battle for the 2A state crown Wednesday night at 7 o'clock.

"It's a great experience going to state. It means so much because these girls have worked so hard for this and I'm just glad to be a part of it," said Lady Lions head coach Jordyn Hester. "They have worked hard every single day in practice and they came out today and worked really hard. I'm so proud to be able to witness them being successful because if anyone deserves it, it's theseseniors."

The current seniors were freshmen on the 2019 team that finished as regional runner-up behind West Sabine.

In Game 1, Macie LaRue threw a complete game shutout while giving up three hits, striking out six and walking one in seven innings.

Lovelady’s offense got started early when Mihyia Davis singled, stole second, went to third on an error and scored on a sacrifice bunt by Scout Lovell.

The Lady Lions went up 3-0 in the third on a two-RBI double by Haven Prager that scored Bailee Albinus and Lovell, who was intentionally walked.

In the fifth, Davis singled, stole second, went to third on a fly-out and scored on an error by the third baseman.

Morgan Womack led off the sixth by smashing a dinger to centerfield for Lovelady’s final run.

The Lady Lions racked up seven hits off three Groveton pitchers, who combined for three strikeouts and two walks.

Returning Friday, the Lady Lions put on a home run clinic as they delivered the final blow in an 11-2 victory.

By the end of the day, Lovelady had booked three round-trippers along with two triples and three doubles.

The Lady Lions batted first and it didn’t take long for the offensive fireworks to start.

Lovelady plated three in the second for a 5-0 lead. LaRue’s single drove in Rylee Biedrzycki, who reached on an error. Gracie McMahon, courtesy runner for LaRue, went to second on a wild pitch, McMahon scored when Davis smoked a fly ball to right field for a two-run shot.

Womack sparked a four-run flurry in the fourth with a solo homer to center field. Shyanne Pipkin hit a two-RBI single to bring home Biedrzycki and Albinus. Pipkin scored on an error.

After Groveton got on the scoreboard in the fifth, the Lady Lions pushed across their final two runs in the sixth.

Lovell led off with a three-bagger and came home on an error. Prager, who reached on an error, scored on a sac bunt by Biedrzycki.

In the bottom of the sixth, Groveton’s Abby Lee homered on a line drive to center field.

LaRue went the distance in the circle. She surrendered two runs on five hits with four strikeouts and one walk.

The Lady Lions collected 11 hits off two Groveton pitchers, who struck out seven and walked two.

Lovell, 3-for-4, fell just short of hitting for the cycle with a homer, triple and a double. Davis went 2-for-5 with a homer and triple.

Womack smacked a homer, while Prager and Biedrzycki each booked a double. Linda Martinez, LaRue and Pipkin each collected a single.

"Yesterday the girls just felt like they didn't execute the way they wanted to execute. So, this morning they worked really hard in the batting cage just making sure that they sit back and wait on the pitching that we haven't really seen very much lately. They did a really good job of executing. They sat back and waited on their pitches, stuff they could hit hard. They did what they needed to do," said Hester. "I'm just so proud of these girls because they worked so hard to get here."