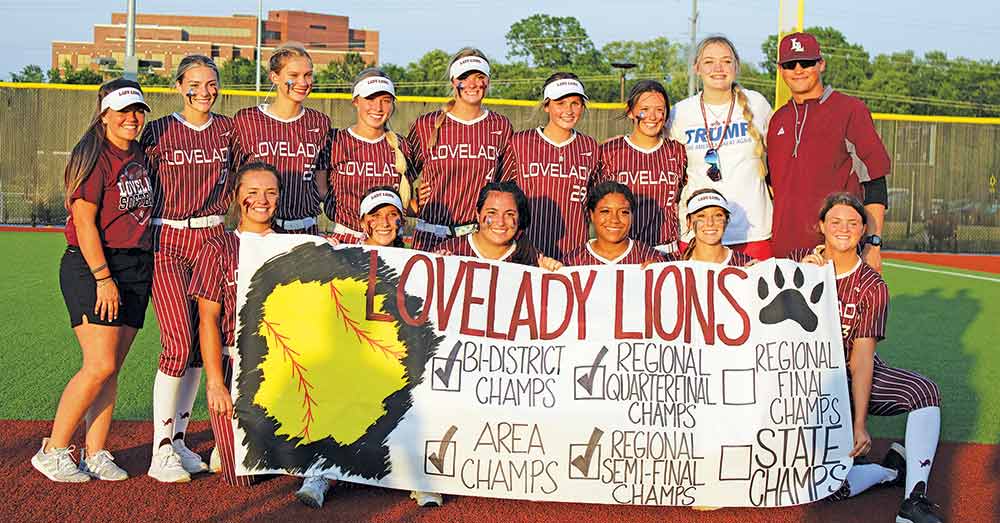 The Lovelady Lady Lions checked off another box on their banner with a series sweep over Como-Pickton in the regional semi-finals last week in Tyler. LARRY LAMB | HCC

TYLER -- It was business as usual for Lovelady's  softball team.

The Lady Lions continued their string of shutouts with a 10-0, 10-0 series sweep over the Como-Pickton Lady Eagles in the Class 2A regional semifinal.

Lovelady pitcher Macie LaRue, who went the distance in both games, threw a one-hit shutout in both games. She recorded a total of 17 strikeouts in 11 innings and walked three in each game.

In Game 1, Lovelady jumped out to a 3-0 lead in the first and continued to pull away with three in the second, two in the third and two in the fourth.

Batting 2-for-3 were  Scout Lovell, Mihyia Davis and Haven Prager, who hit a RBI triple in the second inning.

Morgan Womack went 2-for-2 while Rylee Biedrzycki, Shyanne Pipkin and Bailee Albinus each had a base hit. Lovell, Biedrzycki and Pipkin each collected two RBI.

Always-dangerous slugger Linda Martinez didn’t get a chance to bat as she was intentionally walked twice.

Returning to Tyler on Thursday, the Lady Lions picked up where they had left off  and jumped out to a 4-0 lead in the first frame.

After intentionally walking Martinez the first time she stepped up to the plate, Como-Pickton decided to take their chances when she led off the third. After fouling off the first pitch from Buster, Martinez mashed a fly ball to left field that put Lovelady up 5-0.

After scoreless fourth and fifth frames, the Lady Lions scored five in the sixth.

With two runners in scoring position, Lovell hit a hard ground ball to third base to bring home Kenzie Seale and Albinus. Prager reached safely on a dropped third strike and Lovell scored to make it 8-0.

After Martinez singled, Womack hit a hard grounder and reached on an error by the second baseman.  Martinez scored and Prager came home on the same error for a 10-0 lead midway through the sixth.

Down to their final three outs, the Lady Eagles were unable to score and the game ended under the 10-run rule after six innings.

LaRue struck out the first batter and walked the next but the runner was caught stealing second on a throw from home by catcher Womack. LaRue sealed the win with a strikeout and the Lady Lions checked the regional semi-final championship off their to-do list.