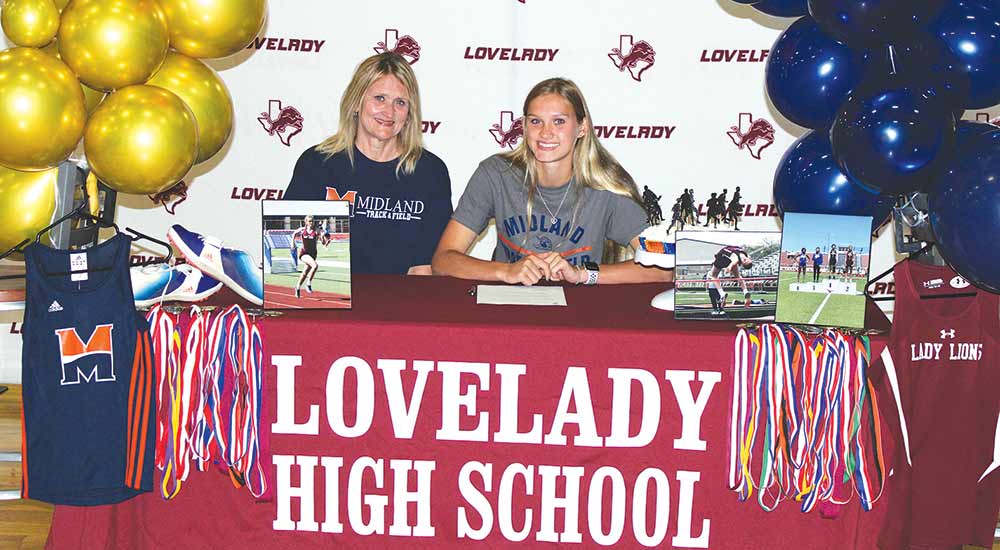 Shyanne Pipkin, pictured with mother Beth Pipkin, signs a letter of intent with Midland University (Nebraska) during a ceremony Tuesday, May 17. A bevy of track and field medals that Pipkin earned during her high school career are draped over the signing table. LARRY LAMB | HCC

Pipkin made her college decision official during a signing ceremony Tuesday, May 17 in the LHS gym.

Midland University is part of the National Association of Intercollegiate Athletics (NAIA) and competes in the Great Plains Athletic Conference (GPAC). MU is located in Fremont, a city of 26,000 in eastern Nebraska.

Pipkin said Midland’s track coach primarily wants her to compete in high jump and 400-meter dash but they will discuss utilizing her in other events.

Pipkin, a multi-sport standout, was still receiving scholarship offers in various sports on the day she was planning to sign with Midland.

Jacksonville College was interested in Pipkin for its cross-country team while Ranger College and Oklahoma Wesleyan University were both eyeing her as a  basketball prospect.

“I went and practiced for those colleges, but I just felt like Nebraska was my place. I thought I’d fit in very well there,” said the future MU Warrior.

“Midland's men’s program is really good but the women’s program has great potential with some good people coming up. I’m excited to be a part of something that’s going to be successful,” she said.

At Lovelady, Pipkin was a regional qualifier in high jump the past two seasons. She didn’t have a chance to compete during her sophomore year when the UIL cancelled the season due to the pandemic. As a freshman she advanced to the area track and field meet on the 4x200 relay team. Pipkin was a regional qualifier in cross country the past three seasons.

Pipkin will have to adjust to living in a colder climate. “I’ll be dressing with a lot of clothing. I’ll probably wear a blanket everywhere,” she said.

Fortunately, the indoor track and field season runs December through mid-February, so Pipkin will escape outside competition during those months. The outdoor season begins in mid-March and concludes in May.

In addition to playing volleyball, Pipkin has been involved in cheer and is a member of the Lady Lions softball team that is playing in the regional final.

She earned Academic All-District honors in basketball.  Outside of athletics, Pipkin is a member of the National Honor Society and FFA.

Pipkin plans to major in agribusiness but she has not decided what career path she wants to pursue.

Lovelady head track coach Will Kirchhoff said MU "found a gem" with Pipkin’s versatility, work ethic and selflessness. "Those are qualities that make her valuable to an athletic program," he added.

Kirchhoff joined LISD when Pipkin was in eighth grade and has watched her progress the past five years.

“She’s a unique track athlete because she’s so versatile. She’s been a regional qualifier in everything from the 800 to the mile to the high jump. This year she triple jumped for us as well as running the mile relay and the quarter.  There’s not really anything she can’t do and she’s such a team player. Whatever we need her to do, she’s worked her butt off to make sure the team is first and she’s going to score points at the district and area track meets. Over the past few years she’s been a huge part in our winning the district title and back-to-back area championships,” said the coach.

Just as she has done at Lovelady, Pipkin will be a scoring threat for MU in multiple events at conference meets.

"She has so many tools on the table whether they choose to use her as a heptathlete where she can cover seven events and be a multi-event athlete or if they want her as a middle distance or true distance runner," said Kirchhoff. "She provides a lot of flexibility as one of those glue guys that can always fill in a spot. She is going to do her best to achieve whatever she can in that event and get you points. "

“She’s going to be the hardest working person. Day in and day out. She’s going to show up early and leave late and make sure that the team is always first. What makes her such a special kid is because she is one of the most selfless humans I’ve ever been around. I couldn’t think of a better kid to get this opportunity than Shyanne. We’re excited to see all the things she’s going to accomplish,” he continued.

Pipkin competed in five track and field events her senior year, the maximum allowed by the UIL. She competed in high jump, triple jump, 800 run, mile run and mile relay and scored points in every event, in addition to being an area qualifier in all five.

“We couldn’t ask for a better role model for our young kids to see that hard work pays off, especially today when she’s taking this step to compete at the next level. She’s a perfect citizen in the classroom, in the hallways and on the field,” Kirchhoff said.

Midland University will be competing in three Texas meets next year at Abilene Christian, University of Houston and Texas Southern, so her friends and family won't have to travel to Nebraska to watch her compete.

Pipkin’s advice to aspiring athletes is, ”Follow your heart. Go with what your heart wants you to do because it’s going to be the best thing for you.”